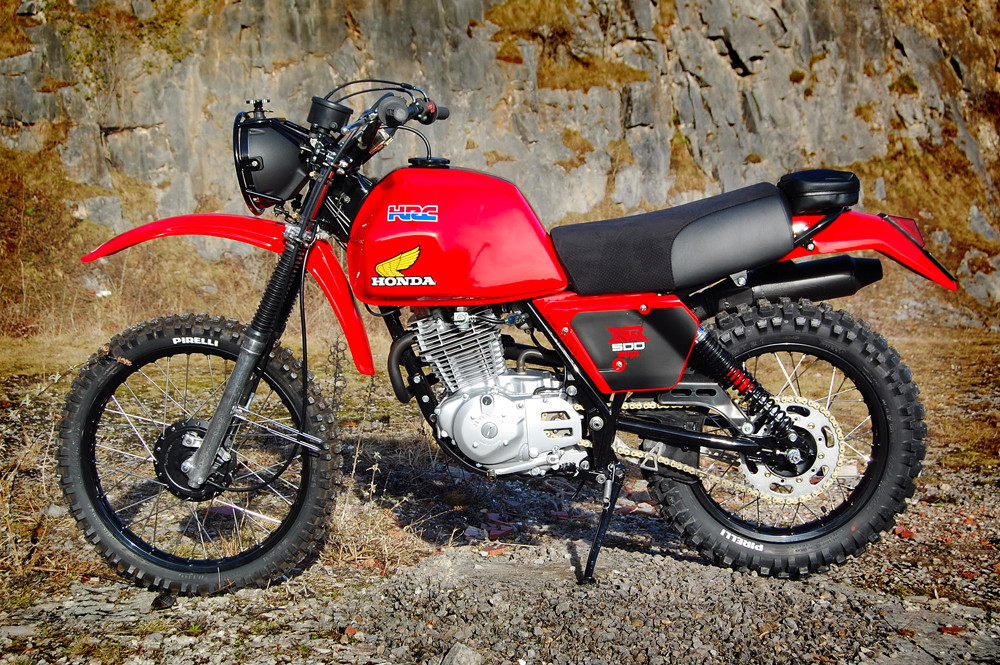 This story starts in 1979, when a young 12 year old is flicking through a copy of his uncles Cycle Magazine and comes across a review of the newly released Honda XR500. The article makes such a huge impact on him that he promises himself that one day he will buy one. Now, 30 years later and Andrew Greenland has finally made that childhood dream happen. Andrew isn’t a newcomer to the pages of Pipeburn — we featured his meticulous NX650 Street Tracker last year. As he says “ Honda fourstroke dirtbikes are definitely my thing.”

Here’s how Andrew describes the build: “The fuel tank came from a 1982 Honda XL500r Paris Dakar which was beat to hell but extremely rare, so I had to just get on with it. Seat was original; I had to cut 2.5 inches off the front to allow for the bigger tank and recovered with alcantara and vinyl. Mudguards are repro copies from the USA, sidepanels are originals, exhaust is original with a 3″ to 2″ reducer welded on the end. Also the front wheel is resized from a huge 23″ to a more normal 21″. I tracked down a NOS Speedo which again was very hard to come by. The motor was rebuilt, rebored and the valves were reworked. It’s got Renthal fat bars and Apico clamps up top, and a Baja designs 8″ Soltek race lamp out front. Just like the NX650, all paint was done in my shed with my ever faithful rattle cans.”

This bike looks better than the day it rolled off the production line back in 1979 — it probably rides a hell of a lot better as well. Andrew has definitely done a great job paying homage to early Dakar and Baja race bikes, and we look forward to the next bike to roll out of his shed and/or spray booth.