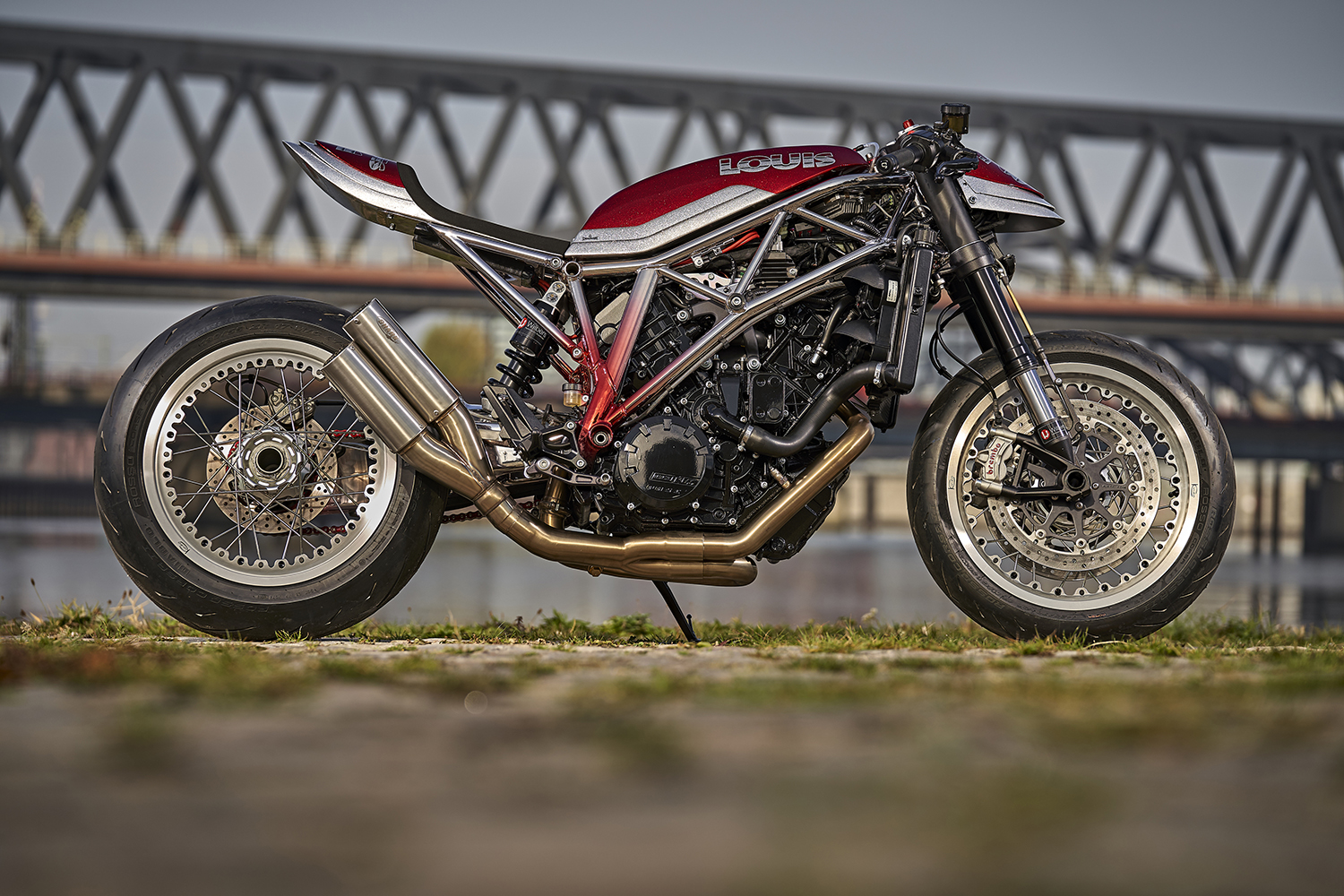 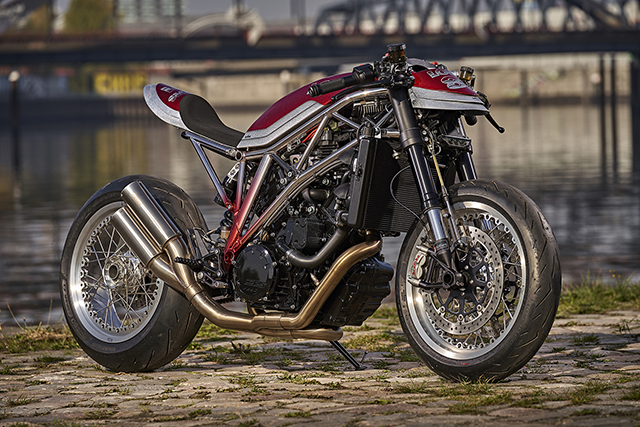 Head to the sprint races at the Glemseck 101 in Germany each year and you’ll see a host of once tame street bikes tearing up the track. But for the fine folks at Louis, Europe’s largest retailer of motorcycle clothing and accessories, they wanted to start with something already crazy and then really get wild. So they slapped down their cash for a bike known in the industry as ‘The Beast’, a KTM Super Duke R, the most menacing hyper naked money can buy. Then with their canvas laid bare they’ve thrown all but the kitchen sink at the Duke R, called it Caty M. Glam and the lipstick clad femme fatale was ready to strut her stuff on the 1/8th mile! 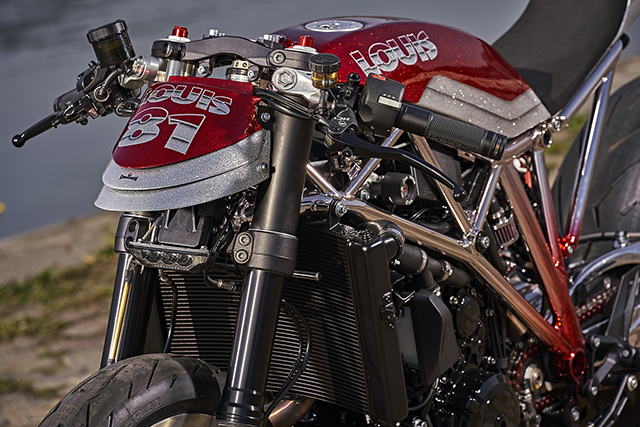 The company began more than 80 years ago in Hamburg when a young motorcycle enthusiast, Detlev Louis, met small workshop owner Walter Lohmann. What they created is one of Europe’s great motorcycling success stories with outlets across the continent and their Gigastore’s a bike enthusiasts nirvana. So good is the business that none other than Warren Buffet bought into the company five years ago. But they’ve never lost their original love for two wheels and regularly build special custom projects to blow their customer’s minds. 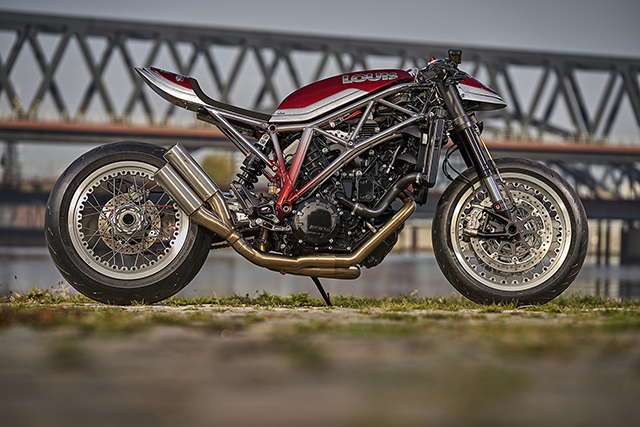 That’s where Caty comes in, having previously won the ‘Class of Legends’ at the Glemseck and a bunch of trophies at major shows with their Indian Chief known as Enigma, it needed some V-Twin company in the garage. In the Super Duke R they found the most powerful platform of its kind and the mission was to turn the “hooligan into a dancing queen” for it to then be piloted by model and stunt woman Mai-Lin Senf. The build was overseen by Garage Crew members Martin Struckmann and Detlef Stüdemann who wasted no time in stripping off the big girl’s clothes and getting down to business. 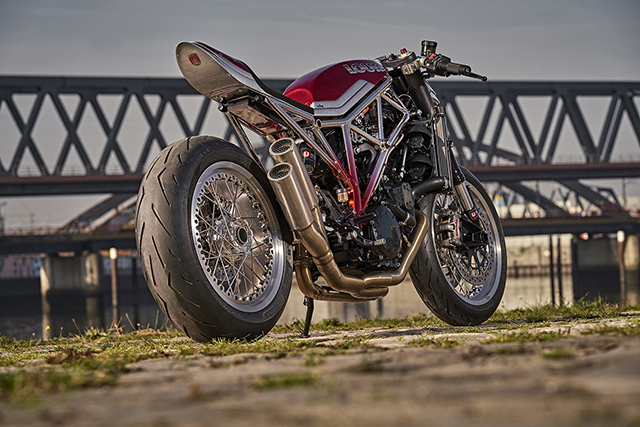 “The original rear frame, almost reminiscent of a scaffolding structure, is replaced by a filigree part and chrome-plated along with the main frame and swingarm.” The chroming process used is able to withstand the torque twisting loads applied to the frame far better than conventional chrome and can also be painted over. Then it was designer Kay Blanke’s turn, who worked with metal shaping guru Michael Naumann to fabricate the stunning replacement tank, rear seat section, and front cowl by hand from aluminium. But the new front and removal of the factory instrument cluster had caused a problem, the modern CAN bus system threw a fit! 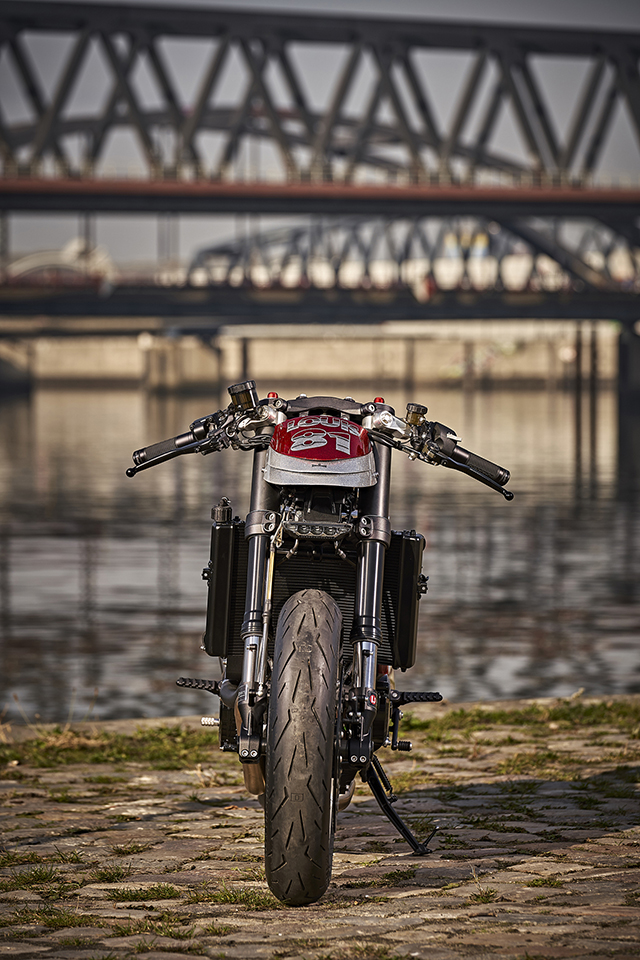 A smart re-wire that hides the essential factory parts both behind the cowl and under the seat solved the problem. Before a Dynojet Power Commander and Autotune unit was added to the system to provide easy tuning at the track. The controls all come from the Louis catalogue, Gilles clip-on handlebars are fitted up with Gazzini accessories and Brembo radial master cylinders. While a bunch of Koso LED lights remarkably keep the bike road legal. But totally transforming the looks is the incredible paintwork by Danny Schramm, with the flake heavy red and silver dripping down onto the chrome. 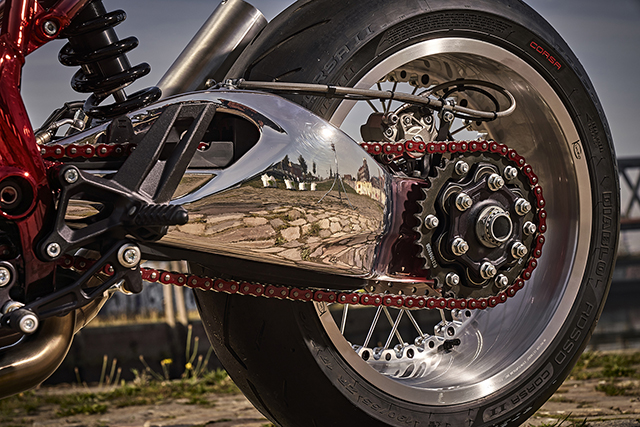 The suspension is also seriously clever kit, which is saying something given the Duke R comes standard with some of WP’s finest. But given the intention to compete and Louis carrying the full range of Wilbers products, this was the perfect chance to get silly. The rear shock is everything in racing and the KTM is kitted out with a full comp spec 642 shock. Upfront is Wilbers 46R complete forks, but it’s what is swinging from them that helps the bike the most. A GP style potentiometer bolts to the fork mount and feeds back vital shock stroke data allowing tuner Ulf Penner to control wheelies more consistently than relying on the wheel speed sensors alone; hole shots win drag races. 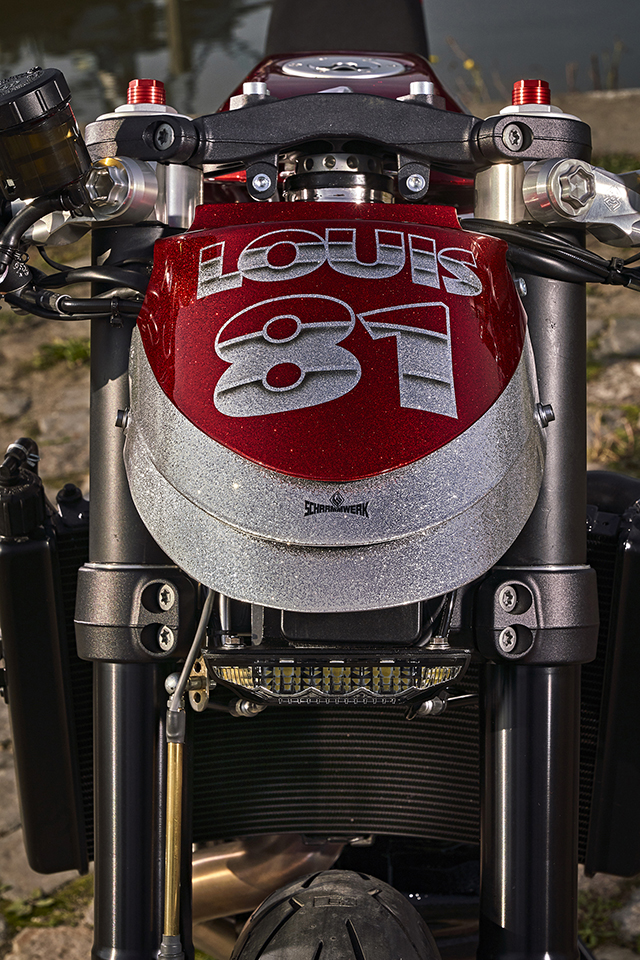 With the bike’s front wheel down and flying off the line, it’s a good thing the Duke comes equipped with a steering damper, should it get the wobbles. Then given how quickly Caty gets to the far end of the track and the limited run off at some events, there is no need to panic with the latest Brembo mono-block calipers clamping the big twin drilled discs. The wheels make a big statement too, big dollar Kineo spoked items look trick and wrapped up in Pirelli Diablo Rosso Corsa II’s there is plenty of grip; well, just! 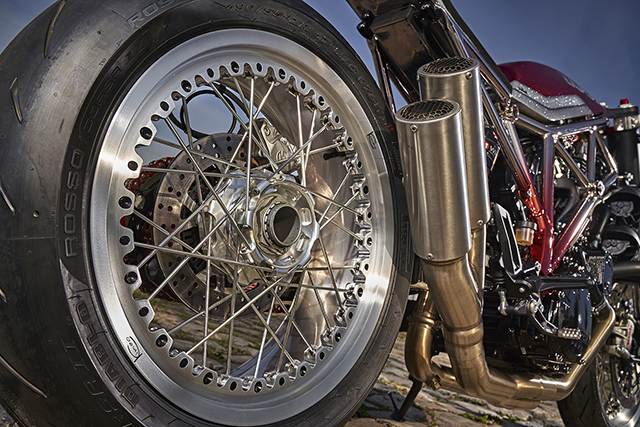 Causing all that chaos for the rear tire is the thumping 1300cc, 75°, V-Twin that from the factory spits out nearly 180hp. With the change of tank Stefan Trautmann from STParts stepped in and took care of engine breathing with a new manifold, while those header pipes are as big as you’ll see on a roadbike. To finish them off, exhaust company SHARK made a set of mufflers, and so happy with the results have homologated them into street-legal items they now sell called “Track Raw”. 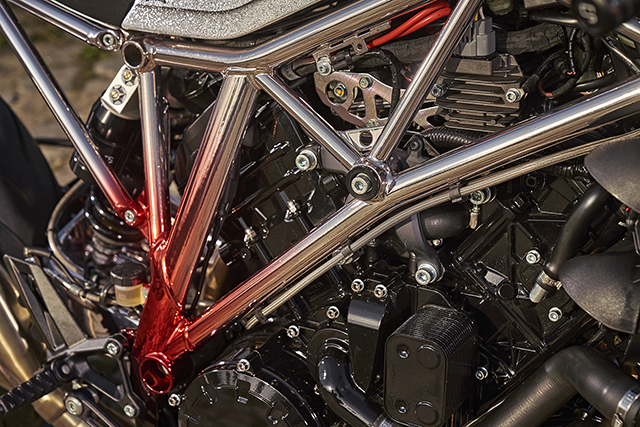 Ulf finished up the tuning and what you now have is a motorcycle with one horsepower at the tire for every kilogram of weight. It’s little wonder Mai-Lin then rockets from 0-100km/h in just two seconds and when Ms. M. Glam isn’t winning races, she’s also picking up trophies at Europe’s major shows; Caty, we love you! 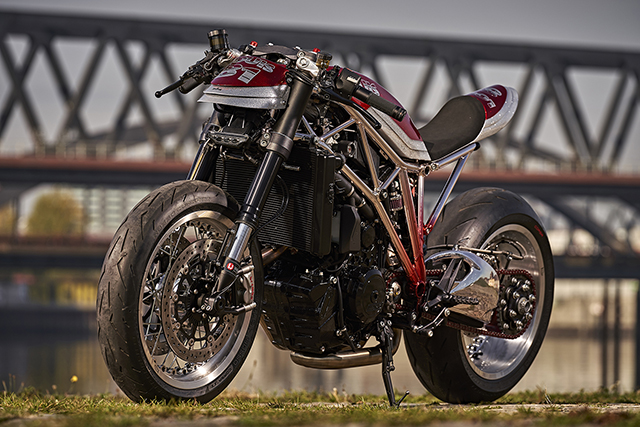 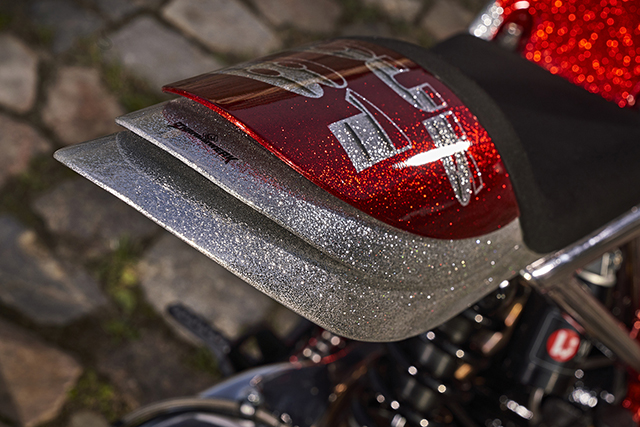 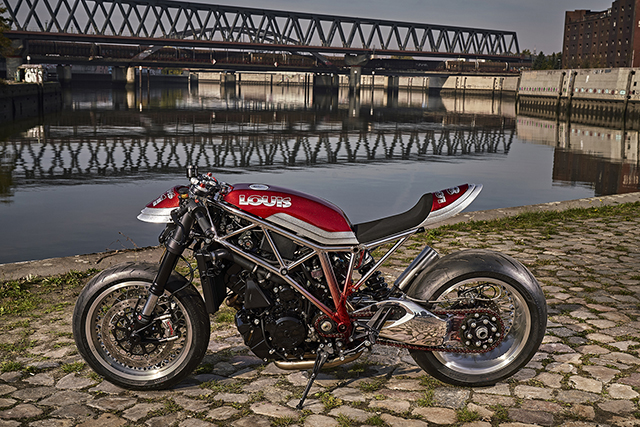 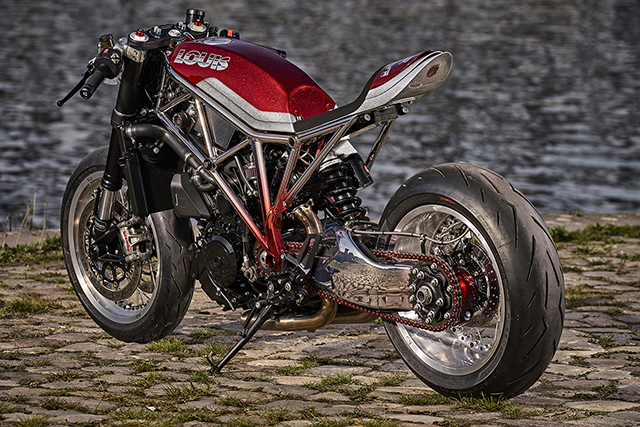 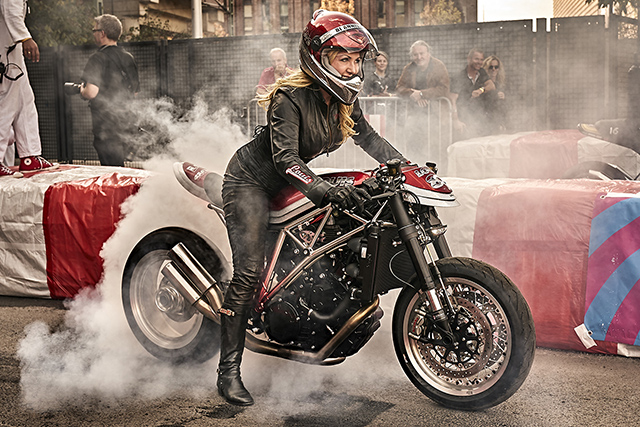 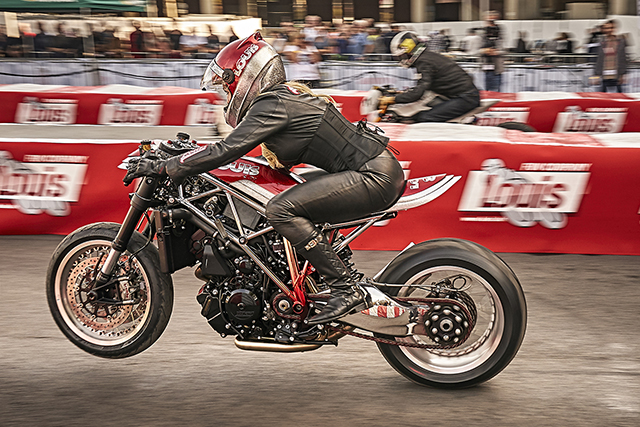 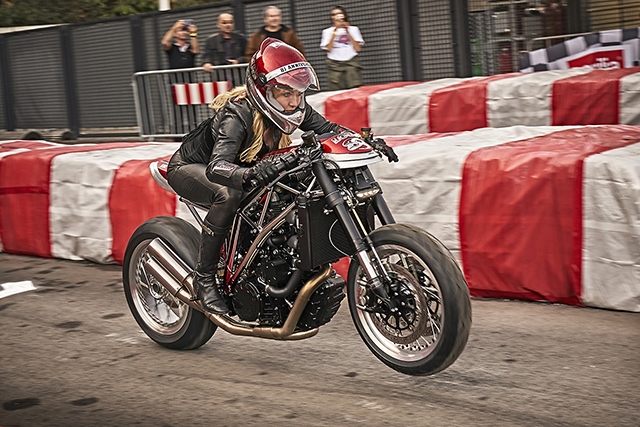