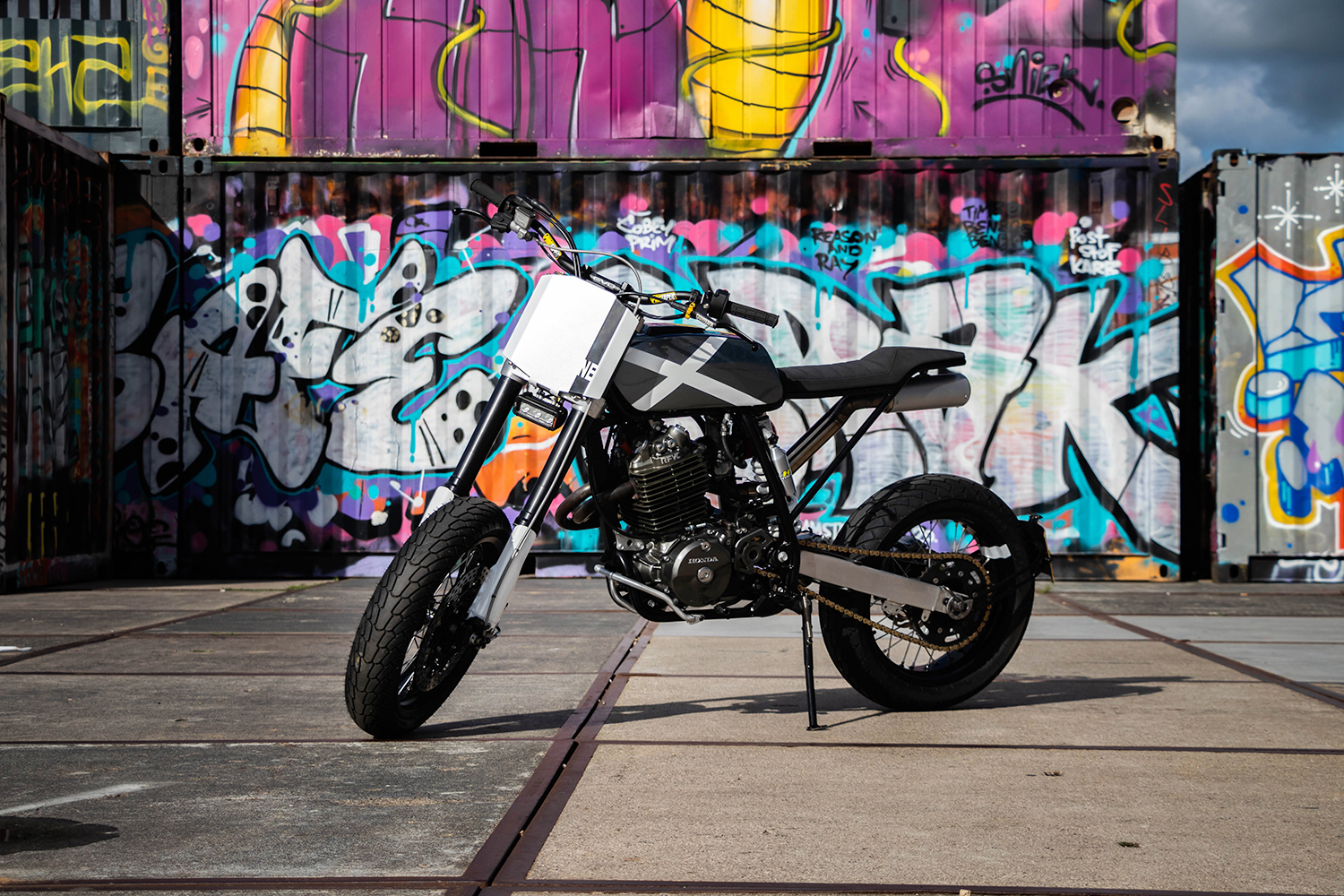 Put together a few mates who are into bikes, take a seat at a pub and let the drinks flow and it’s not long before dream bikes are being designed on bar mats, napkins and in the collective mind. But most of those machines are long forgotten by the morning and even less ever get built. Nick van der Vlis, however, is a different kind of character, with an enthusiasm for custom bikes that’s hard to match. So with the chance to build a friend his dream bike, it was an opportunity he wasn’t going to miss. Destined for the streets of Rotterdam this Honda XR600R rolled out of the Vetvlek Garage ready for some lane-splitting, flame-spitting, street shredding madness, no wonder they call it ‘Noisy Escape’!

Nick’s been building custom bikes in The Netherlands since 2014 and by 2018 he’d made it his full-time job. He’s just one of those people that loves bikes, is filled with ideas and has the sort of uplifting energy that inspires those around him. “We were having a coffee in some kind of way too expensive fancy bar in Rotterdam and I think just then it hit him that I could be the one to make his lifetime dream come true,” he tells us of the conversation he had with the brother of one of his best mates. “As he lives in Rotterdam he wanted an agile Bastard bike,” Nick laughs, describing his idea of a hooligan street tracker.

“So with that said and having brainstormed A LOT! I did my best to combine all his wishes and made them into our own unique design.” But before work could commence they had to find the right donor bike, a Honda was high on the list, but first there was some convincing to be done. With clean lines and lightweight in mind, Nick was able to get his friend to agree to kick start only and with that done the XR600R made perfect sense. With the right bike located and all the ideas swirling around in his head, it was down to work as quick as he could, the man just loves to create.

With the bike stripped back, the engine out and a bare canvas to work with, the first thing he wanted to get right was the look, but it wasn’t going to be easy. “So to have an idea is one thing, but to actually find the perfect parts that fit in with the design can take ages. This was exactly what the problem with finding a gas tank.” The first tank to be tried was a Kawasaki KH110, it sat too shallow on the frame, next a Kawasaki Binter unit, which Nick had no time for. Finally, he found a guy with an old Suzuki tank for sale online and in the background of the photo he could spy a pile of other old tanks, time to go raid it!

The tank he ended up taking from the stash was a ’70s mini bike unit, rusted, dented and the filler cap locked with no key, it was however exactly what he was after. Both frame and tank required modification to fit, the tank itself has been widened at the rear and the filler lock drilled out and replaced with a nice new cover. “The paint job with the stripes comes back in the rest of the bike. The white stripes in the rims, and in the same thickness there is a black stripe on the white front plate with ‘NE’ which stands for ‘Noisy Escape’. The engine is painted to match the metallic grey in the tank.”

Moving backwards, the rear end is stunning, no battery means clean looks and this tasty treat is finger-licking good. With the pipe bent up for each side of the new subframe, they were all welded up with the rear hoop sporting a CNC milled housing to fit a Highsider Shorty smoke LED rear light. The seat unit itself maintains the minimalist look, hugging the lines of the new metalwork, while still providing plenty of comfort and endless good looks. Nick made the seat pan himself, as well as the plating under the seat to reduce heat before Ellemeyer took care of the upholstery.

Now to get it rolling, “Jan Simon from JSR Service laced the wheels with some stainless-steel spokes and I slapped on some Dunlop Mutant rubber.” Then work commenced on the trick suspension, the head steering head tube is milled and the yokes of a CRF450R filled with the right bearings to match the XR. Then the internally lowered and modified fork tubes are slotted in, all matched up to a Hyperpro shock who also dialled in the suspension for the rider’s weight. The Pro Taper catalogue was unleashed on the bars and accessories, while the braking also gets a big upgrade from Moto Master; the front sporting a giant 320mm rotor.

The power unit has been treated to a new clutch, jetted carb, uni filter and a dyno tune, but it’s the exhaust that does the talking. The stainless steel system barking out of the rear can that Nick made from the scraps so that he could get the small size and design he was after. “I made a whole new wiring harness from scratch too and made it full DC instead of partly AC and DC. This way all the LED lighting works without a battery.” There is a host of clever solutions to reduce it all done to a tiny loom that still operates everything a bike needs to be street legal. It’s the work you don’t see that’s the best, like the details of the number plate holder that are only revealed when you study the pictures closely. But turn the key and pin the throttle and this ‘Noisy Escape’ is street tracker nirvana.