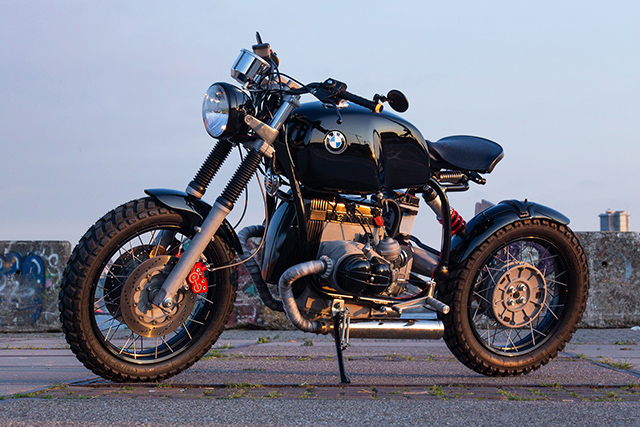 Some projects are just meant to be. We can resist all we want, but fate has a funny way of dictating our ultimate outcomes in what we do. Marc from Haseth Motorcycles in Amsterdam recently experienced this first hand. When shopping around for a project donor, Marc came across a used early ‘90s BMW R80R, though it was a bit worse for the wear, so he ended up opting for an R60/2 instead. A little down the road after that build was complete, Marc came across the very same R80R, though again passed on it. But when it came time to find another suitable airhead donor, and the R80R popped up for a third time, Marc took it as a sign. 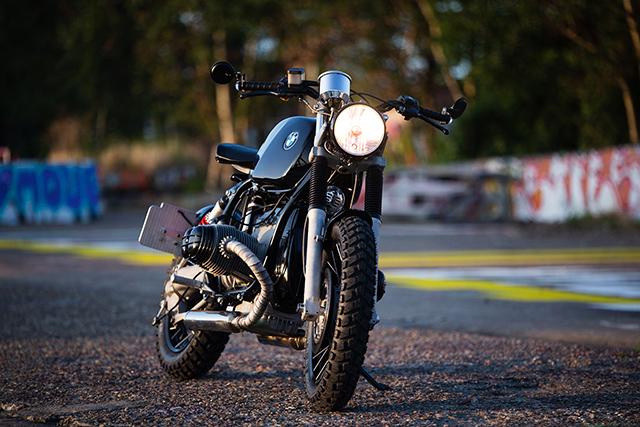 “In short, I was a bit hesitant about this oddball project, but as they say ‘when opportunity knocks’,” jokes Marc.

Despite its rather shabby appearance, when Marc got the bike up on the bench he was pleasantly surprised to discover things were in much better shape than he’d originally thought. “The previous builder had actually done a good job from a mechanical point of view. Not like many of the half-assed projects that have been simply pieced together, but the bike was actually properly gone through. This provided me a very nice clean canvas to start the project on,” Marc tells us. 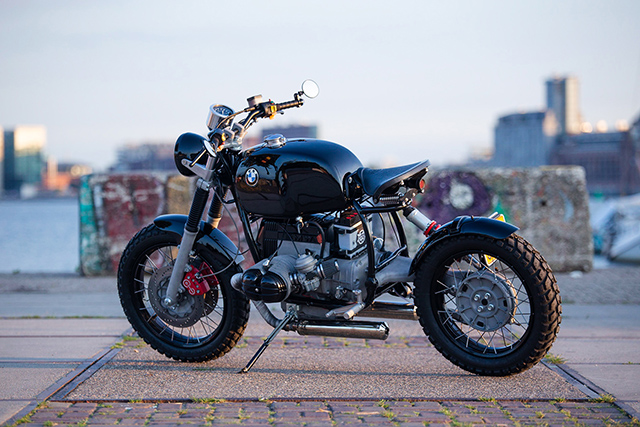 Marc stripped down the bike and began building it back up, starting with the tank, as it would largely dictate the overall feel and aesthetic of the build. “There are some beautiful examples out there of skilled people who have successfully pulled off inspiring versions, but the factory gas tank just wasn’t doing it for me. I wanted to go back to the ‘70s and ‘80s style gas tanks that gave the entire motorcycle a different and sleeker appeal,” relays the Amsterdam-based builder.

After doing some digging, Marc was able to get his hands on a busted up fuel-cell off of an old ‘80s mono. It offered the shape and style he wanted, though required fairly extensive restoration to get in order. Once refurbished, a few minor alterations were required to get the tank to properly fit, too. 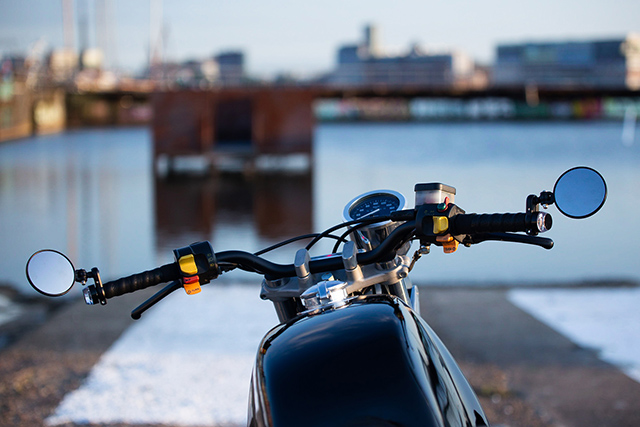 Next in line was the seat. When Haseth acquired the Beemer, it was already devoid of its subframe, so the shop fabbed up a short roost of a seat hoop to support the rider while doubling as the mounting point for the rear Paralever suspension unit. For the actual seat itself, Marc went with an antique rubber Pagusa saddle, cushioned via a single spring set up – a feature the builder says is a subtle nod to the brand’s heritage. 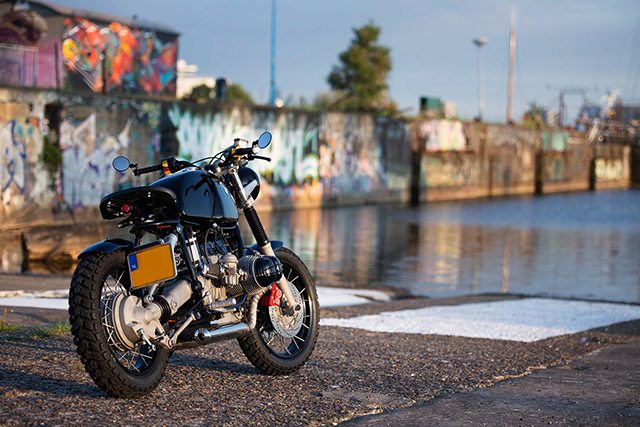 With the bobber-style seat and a single-sided swing-arm, the rear-wheel is left on full display. Wanting to capitalize on this, the Dutch outfit whipped up a long rear fender, mounted at a shallow angle from the right side and floating just above the tire. Up front, there’s a smaller matching fender also closely hugging the tire. The vintage-theme is furthered by the addition of a small round red taillight mounted on the back of the rubber seat, and a classic circular headlight out front.

“After getting the basic outline and stance of the bike to how I wanted it, my focus turned to the details to tie everything together and make the bike into a more contemporary model, borrowing elements from BMW’s bikes from different eras,” states Marc. 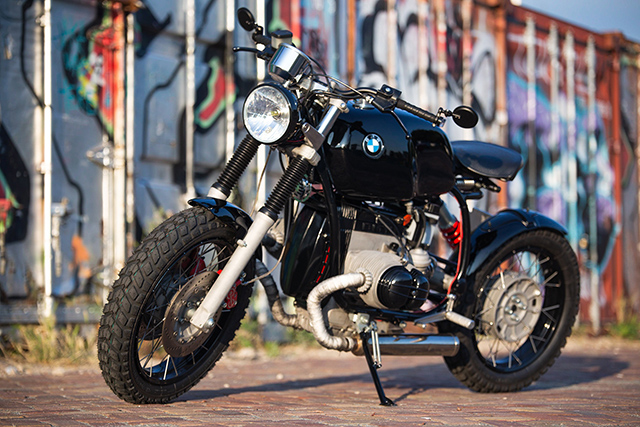 The stock cockpit is now made up of a set of blacked-out low-rise bars wrapped in Brooks leather grips and capped off with LED bar-end indicators and circular bar-end mirrors. The speedo from the BMW’s original side-by-side instrumentation remains, though the tachometer has been jettisoned, and the remaining gauge now sits offset in its own one-off chrome housing. A low-profile idiot light strip lies just ahead of the risers, rounding out the new instrumentation setup.

The R80R’s original single 285mm disc arrangement was upgraded to a dual-disc Brembo setup with red-painted calipers and steel-braided lines. The stock foot-controls were also binned in favor of a pair of trick billet aluminum rear-sets. 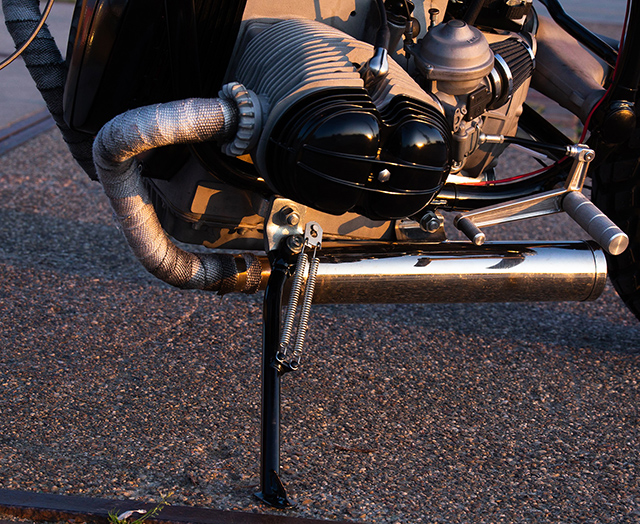 The previous owner had painted the wheels red, so Marc went about stripping them down, only to learn to put them back together is a much taller order. “Apparently everyone — but me — knows that lacing a BMW cross-spoke wheel from scratch is not for the faint-hearted. I came, I tried, and I too failed, so I ended up reaching out to the guys at Haan Wheels in the Netherlands to get it done right,” says Marc.

Once given a clean bill of health, the 797cc boxer twin’s Bing carbs were given a set of pod filters, while the stock mufflers were swapped out for pair of polished cans plucked from an older Kawasaki Z1000. The air-cooled mill then had its side, top, and valve covers hit with a coat of gloss black, while the fenders, headlight shell, tank, and frame all received the same gloss black treatment with “a hint of pearl” in the finish. 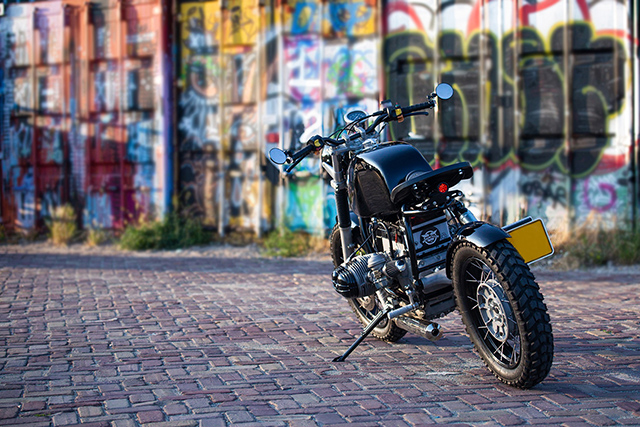 “The key challenge of this project was to get the aesthetics of the bike right without hacking it to within an inch of its life. By combining the older gas tank, the sporty handlebars, rugged all-road Metzeler tires, and dropping the front by a few centimeters, it made the whole machine look a lot meaner and more robust. In the end, I was really pleased that I had gone through with this project,” states Marc.

Dubbed ‘Cerberus’ after the mythical three-headed dogs that guarded the underworld, this stout R80R is a wonderful amalgamation of old and new. It’s a transformative build that manages to retain, if not amplify a lot of the donor’s original character and charm, with its iconic boxer engine at center stage. With a well-considered design and the right modifications, it just goes to show, you don’t always have to go to hell and back to create a solid custom build. 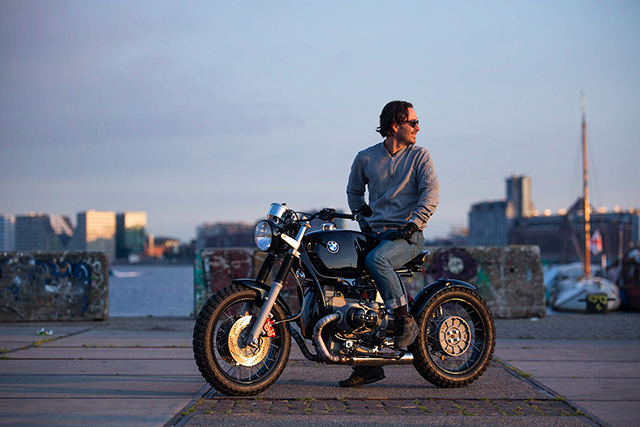