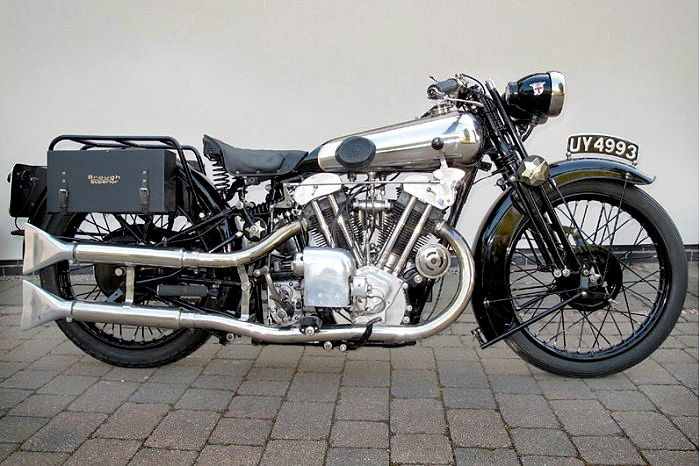 One of our supporters and co-founder of LA’s Falcon Motorcycles recently shared his all time favorite two-wheeled machines with Architectural Digest. We guessed some of you might not be reading Architectural Digest every day, so for those that missed it, enjoy. Words by Ian Barry himself. Nicknamed “Old Bill” after a cartoon character popular during World War I, this was the personal sprint bike of George Brough, the founder of Brough Superior in Nottingham, England. Brough was a consummate showman who dubbed his handiwork “the Rolls-Royce of motorcycles,” and in this modified version of his SS80, he put his machine where his mouth was. This bike will be an influence in the creation of the Vespertine Falcon. This was BMW’s first motorcycle, produced by the company’s chief designer, Max Friz. Friz created something not only incredibly beautiful but also innovative—the bike had a boxer-twin, shaft-drive power train, a system that eliminated the need for a chain or belt and solved overheating problems. The setup continues to be used on modern BMWs. This machine is the sole survivor from a small fleet originally built in an attempt to break the land speed record. While none succeeded, one did achieve an impressive 130 m.p.h. The engine is one of the most interesting and beautiful I have ever seen. It will be my muse for the Peregrine Falcon. The Ariel was considered an exotic racer when it competed at the Brooklands track in Surrey, England, in the 1930s. Ben Bickell, of Bickell and Sons in London, supercharged a four-cylinder engine, making it one of only two such engines that existed in its day. The bike (pictured here is a 1935 model) will be an inspiration for the Altai Falcon. Phil Vincent, the force behind Britain’s Vincent HRD, designed this motorcycle. It is the perfect balance of menace and mechanical art, and among the many inspirations for the Black Falcon. This bike marks the first year of the very successful Manx from Norton Motorcycles, a British company that has racked up its share of achievements at the Isle of Man TT race. The engine from a 1947 model will be used in the Merlin Falcon. In 1967, Velocette made a handful of Venom Thruxton engines with special squish heads, sold only to select dealers, exclusively for racing. One of these engines was victorious in the Isle of Man Production TT that year. It still holds the record for averaging the fastest speed for a 500cc motor—over 100 m.p.h.—for 24 straight hours. Falcon owns one of these rare engines, and it will serve as the heart of the White Falcon. I always look to John Britten’s legacy to remind me of what is possible. He was a mechanical engineer from New Zealand who shocked the racing community when his V1000s placed second and third against the large factory teams in the Battle of the Twins at Daytona in 1991. This was an enormous feat considering that the bikes—including the engines—were entirely hand-built in his backyard. Britten made only 11 motorcycles of his own design before his death in 1995. I truly admire the work of Shinya Kimura, who founded Chabott Engineering, out in California. His commitment and passion have been a huge inspiration to me. The Spike, based on the 1946 Harley-Davidson Knucklehead, is his preferred bike, and each year he races it at Utah’s famous Bonneville Salt Flats, always trying to improve his personal-best top speed. This is the newest Moto GP bike from Ducati. Deemed the fastest racing bike in the world, it represents the pinnacle of motorcycle engineering and cutting-edge technology. What I draw from it is the spirit of taking an idea to its extreme.

What do you think of Barry’s selection? Would you add any other bikes to the list?