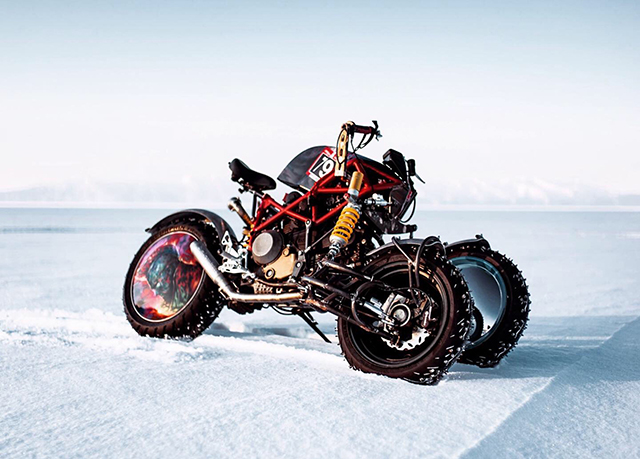 The spirit of rebellion runs deep in the motorcycle world; from the earliest days of racing on the boards, to the post war biker gangs, Easy Rider counter-culture and lads doing the ton around the Ace Cafe. But with popularity comes those who would push conformity, believing there is only one way to skin a cat and trying to police those who seek to be free. But Balamutti’s Vitaliy Selyukov cannot be tamed, his spirit unrestrained by convention he dreamt up one of the craziest contraptions you could imagine and now he’s brought it to life to race the Baikal Mile. It’s three wheels of supercharged Ducati power with just a handful of spikes to keep it upright on the Russian ice. 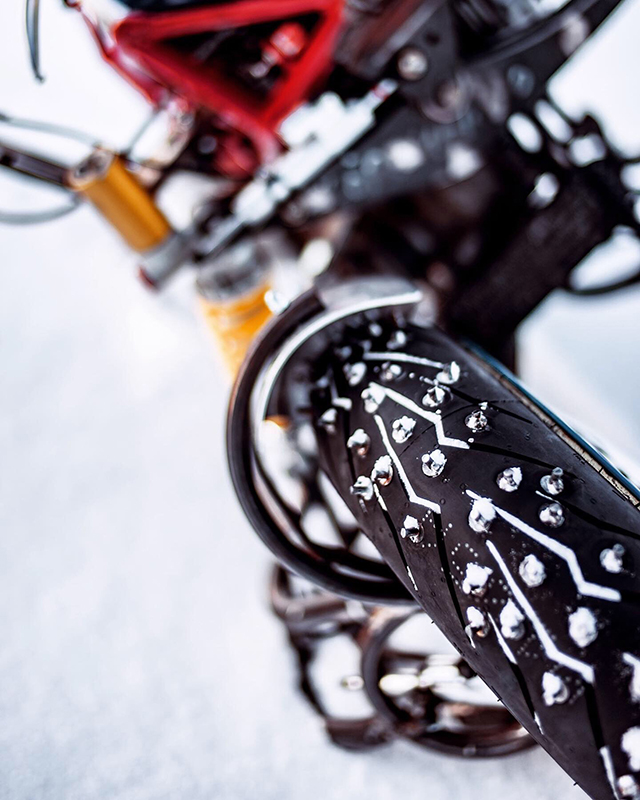 “The idea of building this bike came about in 2016, and grew for several months on paper, in the form of concept sketches that I knew I wanted to transform in the future. It’s hard to say how the idea of such a motorcycle came to mind, perhaps I was inspired by Anakin Skywalker’s Z-74 Speeder,” Vitaliy ponders. But not only did he have plans for one of the craziest machines we’ve ever seen here at Pipeburn, he also planned to race it on the ice at the enormous Lake Baikal, in conditions that can see temperatures drop to as low as -25C.

But such a bike doesn’t come about overnight! Based in the far west of the country in the beautiful city of St Petersburg, Vitaliy was as far from a complete bike as he was from the icy lake, some 4500km away on the other side of Russia. The project is very loosely based on a Ducati Hypermotard, a sensible selection for a man who builds and services all makes and models of Italian motorcycle machinery at his workshop. The donor gave up its engine and trellis frame, but just about everything else is fabricated by the man himself, including the insane two-wheeled front end. 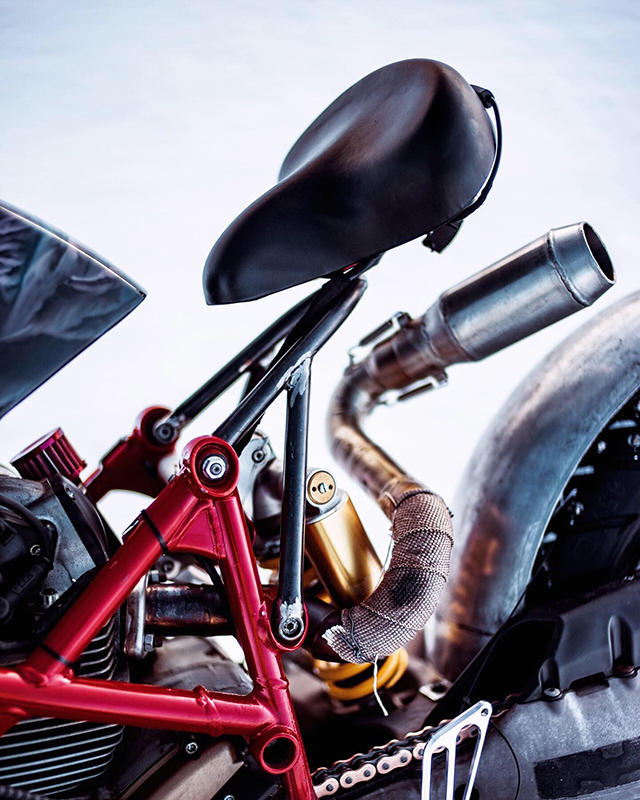 No normal suspension setup could be adapted, it’s almost as if a Bimota Tesi mutated inside a nuclear reactor and emerged with an extra appendage. “With this kind of suspension structure, the development of the steering caused difficulties. For almost a year, I could not find a solution. Variants with cables and hydraulics were tested and rejected.” But finally, he had a plan that he believed would work and a pair of front tubular swingarms were fabricated that are suspended with a pair of Sachs shocks.

However the components to make it turn required a mix of spherical roller bearing equipped hubs and the clever use of twin steering dampers to make things more progressive, and rose jointed actuating rods. A third damper is bolted to the lower headstock and a pivot arm takes its input from the Star Wars-esque inverted handlebars. The rear end is also a single sided swingarm, but of the much more conventional type, coming from Ducati and also controlled by a Sachs shock. While Brembo brakes with wave rotors are also adapted to fit, ensuring the stopping power at least is a sure thing. 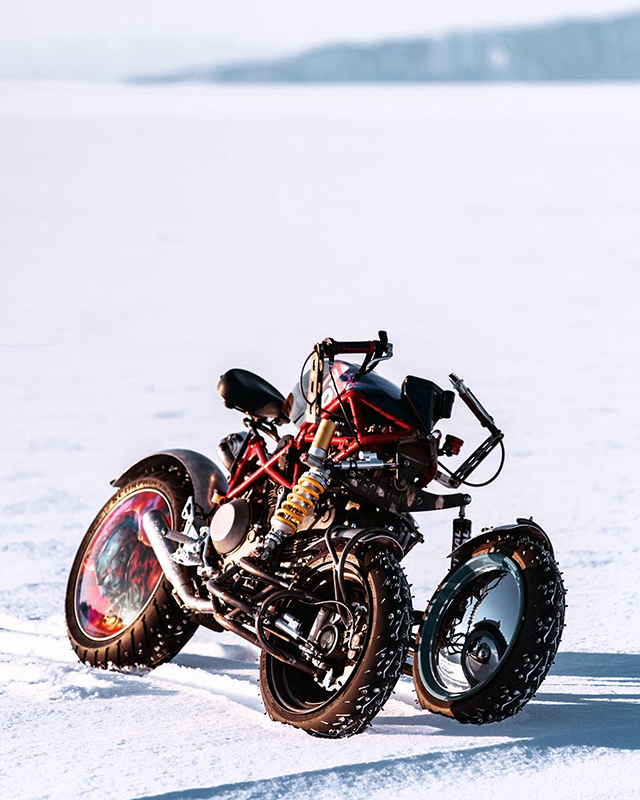 As crazy as the rolling chassis is, Vitaliy’s plan was to race the bike in a straight line and the engine couldn’t be left stock. The 1100cc Ducati L-Twin makes a thumping 103nm of torque, but the 2 valve engine doesn’t crack the 100hp mark. Scratching his head the mad scientist had a solution and knew forced induction was the way forward, supercharged baby! But remember that whole convention thing, nah, not here. Vitaliy took a Garrett GT35 turbo front housing rated for around 700hp, cut off the turbine and converted it into a crank driven centrifugal supercharger system, with his own belt and pulley setup. 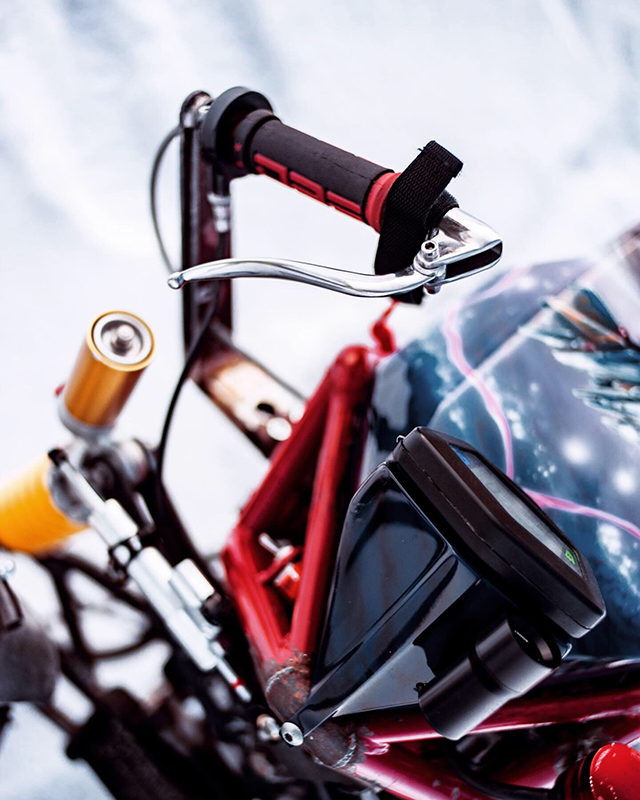 A custom pipe then routes the air into the 45mm throttle bodies, while the post explosion gases leave the engine in a hurry thanks to a pair of single pipes per cylinder that exit out of GP style mufflers. A huge blow-off valve prevents the compressor wheel from stalling on gear changes and a host of wiring modifications and tuning was required to make the engine run crisply. But with the race style rearsets, twist grip throttle and lever combo, controls are, dare we say it, traditional. Of course the looks are anything but and the custom alloy tank gets an incredible paint job that flows rearward to find itself replicated on the back wheel. 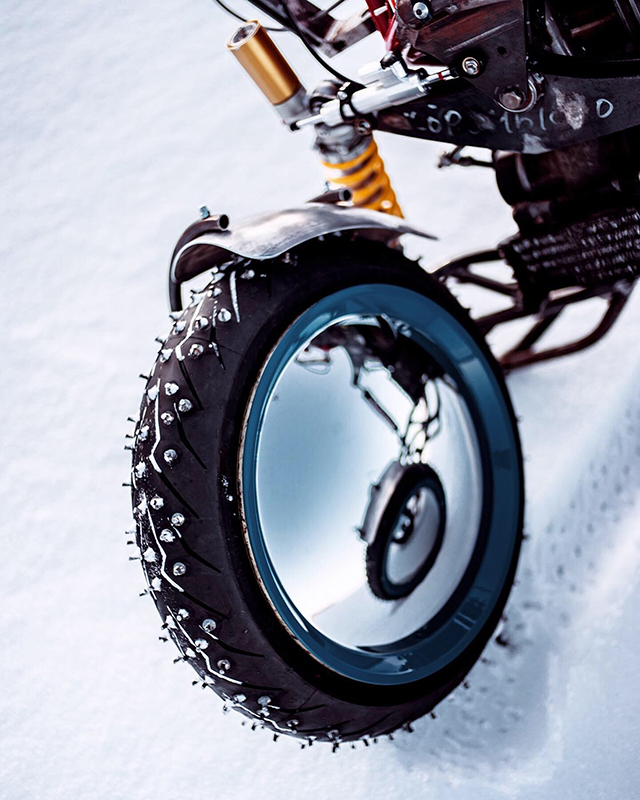 All three of which wear a moon disc, the fronts in the retro chrome finish and with the addition of spikes to the tyres the fitting of three aluminium fenders is as much for safety as anything else. The single seat gives the bike named Yondu a futuristic bobber feel and fitting of that style, the instruments are kept simple with a Ducati digital dash feeding back the vitals. “Contrary to any common sense, the first Yondu test drives were conducted on the ice of Lake Baikal with frost below -10C, and not on warm asphalt, as was originally intended.” Did we mention he’s a brave lad too, or as Vitaliy says a mix of ‘dementia and courage’. And as he thunders down the ice, throttle pinned for the full mile, we can only hope he’s inspired others to kick convention to the curb! 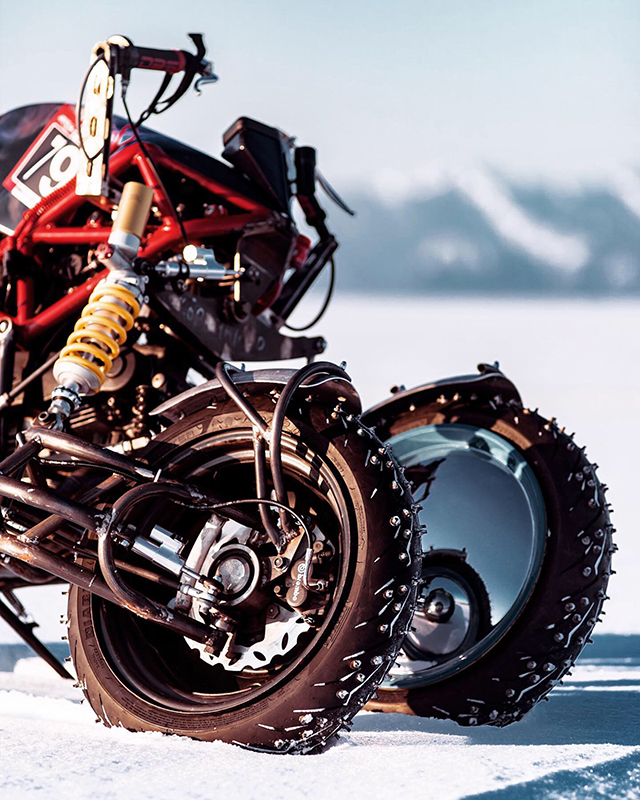