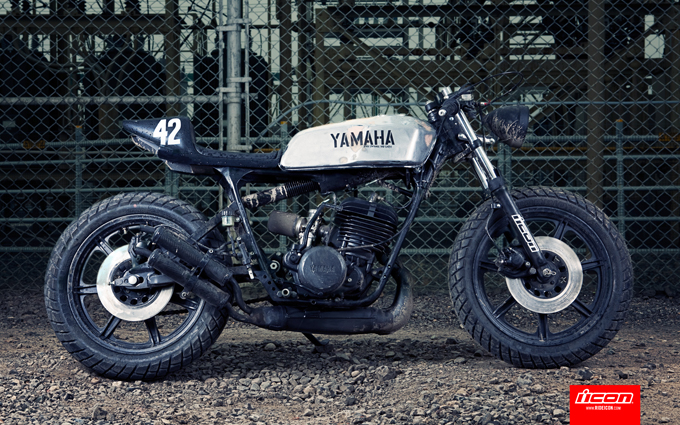 When it comes to creativity, Icon are the leaders of the pack. Not only in their helmet and bike designs, but also in their press releases and photography. This is how Icon’s talented Design Director Kurt Walter describes their latest project – the ‘dirty cafe racer’:

She wanted me dead, that was clear. I could come up with no other reasoning for why she conducted herself in such a hostile manner. With her carbon cans barking like a tortured lap dog the Snakecharmer was hellbound on delivering pain. And not the kind of pain that you just walk off. No, she wanted to deliver the kind of pain that burns for weeks. Where every shower is a constant reminder of your failures. The kind of pain that forces you to sleep on your stomach eschewing blanket or even sheet. The type of pain that your wife not only doesn’t care about, but actively mocks. And who could blame her?

She was a bike built for a different age. An age before drug resistant infections and air quality standards. Powered by the finest premix technology a 1979 Yamaha corporation had to offer, she was both reckless and beautiful. A homogenized concoction of 400cc bits from the entire Hamamatsu product line. RD400 top, XS400 front, YZ400 rear, IT400 middle. Much like Cher, she was an intoxicating half-breed. The result of an ill-conceived tryst between a street racing father and hare & hound mother. She was in two words – a Dirty Cafe.

With a ‘choose your own adventure’  illustration for a paint job she would rule the gravel strewn grounds of the north Portland Container Yards. Spewing both rock and fuel in an unfettered rage against the injustice of all things pure. Her mechanical malevolence was magnificent. And then, without fanfare or ballyhoo,  she sputtered and died. No dramatic fireball, no gasping seizure of piston or rod – just the slightest of backfires and then silence. Some say it was a fouled plug, others, that she was just too beautiful to live. Whatever the reason, the Charmer’s flailing heart had finally stopped. Her dirt encrusted carapace is now enshrined amongst the rafters of the Slabtown whisketeria, where she looks down longingly on the drunken patrons. Even in her misted cylinder sleep she appears tense and brooding. The Snakecharmer was handsome killer – plain and simple.