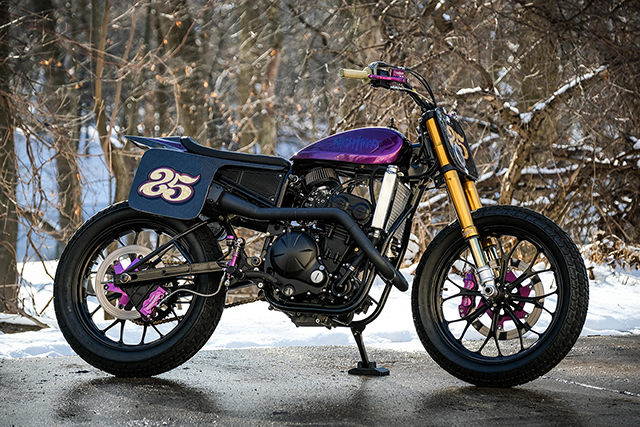 Telling someone ‘it can’t be done’ has proven to be one of history’s great motivators; Einstein and Edison were considered too dumb by their teachers to amount to anything, billionaire vacuum cleaner mogul Sir James Dyson couldn’t get a single company to look at his designs and Stephen Spielberg was rejected from film school, TWICE! So when Ryan Maloney was told by everyone that building a Grand National Flat Track bike for the street was ridiculous, it only lit a fire inside him to prove the world wrong. Named for the very thing it gives its doubters, this custom framed Kawasaki Flat Tracker is winning trophies, tearing up the streets and causing many a ‘Nightmare’! 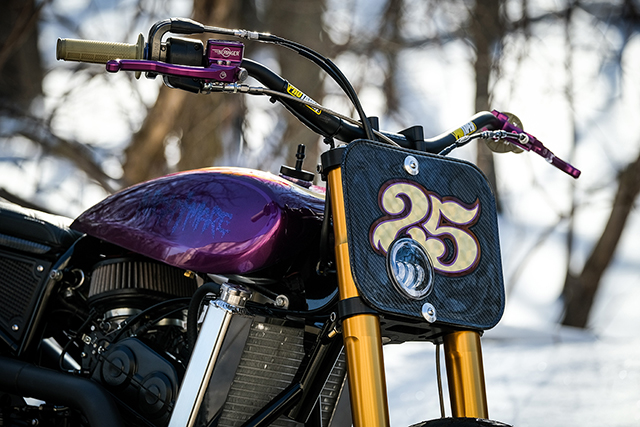 During the day Ryan works as an HVAC technician but when work is over for others, the lights go on in his basement and he turns his talent to bike building. “My whole family races flat track it’s definitely in our blood. I’ve been racing since I was young from dirt track to drag racing cars, I’m obsessed with going fast,” he told us. His sons have inherited the gasoline gene with his four year old removing the training wheels to rip it up on a PW50. For his next build, Ryan was kicking around an idea, “about how cool it would be to have a Grand National bike for the street and that started the negativity from everyone saying it would be horrible to ride, it won’t work blah blah blah.” But rather than back down and definitely not about to take the easy way out by simply building a race replica, Ryan jumped on the phone. The call to J&M Racing Products was for one of their race-winning custom frames that are seen sliding all around the world. Making products to suit the highest level of the sport, J&M provides frames for everything from the modern crop of AMA approved engines, through to units for old school Honda and Triumph singles and twins and the array of modern dirt bike engines. But for his project Ryan selected a centre shock item to accept a twin-cylinder Kawasaki engine. 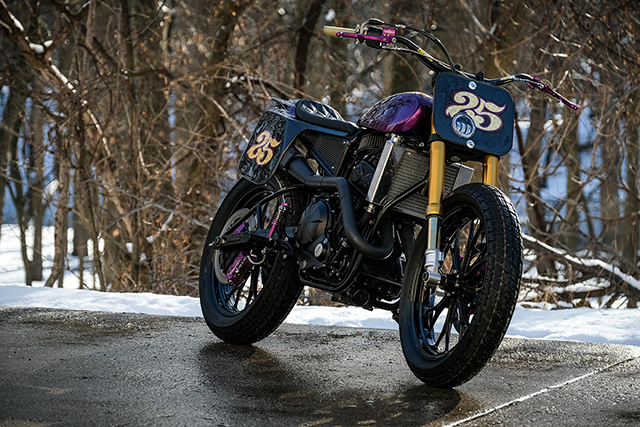 To set it up for the street the wheelbase is now longer to tame things down just a little by extending the swingarm. All of which is brilliantly controlled by a big dollar Penske shock designed to suit the frame and is fully adjustable. Upfront a custom set of triple clamps are also adjustable and suspend the beautiful set of Ohlins forks, originally intended for a track focussed 2015 Yamaha R1. The right leg is machined to lose its brake mount while the left swings a stunning Beringer 6 piston caliper with rotor to match. This is removable for days in the dirt and the rear 4 piston unit takes over. 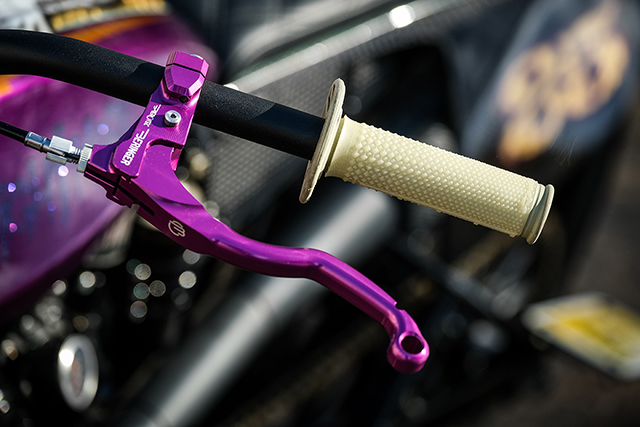 The wheels are an impressive set of Performance Machine engineered forged billet alloy items that are designed exclusively for racing and come with quick-change hubs. Ryan selected a black finish for his pair before wrapping them up in Dunlop’s AMA winning DT3 rubber. To make everything come together Anthony Cicero from 16w Fabworks was brought in to make all the CNC parts. These include one-off foot controls with sealed bearings, CNC side plates to cover up the electricals, kickstand, footpegs, rear shock reservoir mount, and shifter and brake arms, all just for this bike. In Ryan’s words, “He’s an absolute genius!” 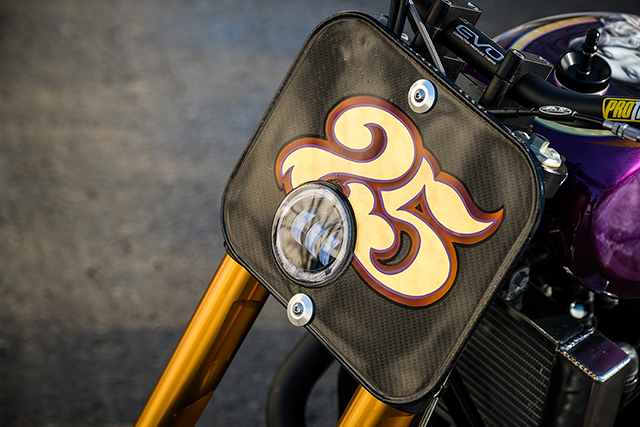 Now with one hell of a rolling chassis underneath him, it was time to bolt in the 2012 Kawasaki 650r engine. The compact parallel twin is a popular unit, not only in flat track but in road and circuit racing too, thanks to motors lightweight, bulletproof reliability and power making potential. To hop things up the twin throttle bodies now breathe through a large air filter, while a custom set of pipes goes their own way before exiting under the seat with twin mufflers. The finishing touch is a one-off alloy radiator to keep the engine cool while Ryan has the throttle pinned to the stop. 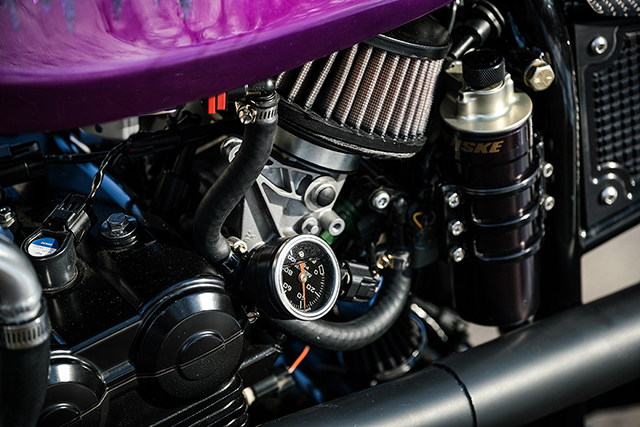 To keep weight low Ryan worked with Airtech Streamlining to make a custom carbon fibre tail section with number plates to fit the frame. All of which is topped off with the perfect seat thanks to Saddleman with a brilliant diamond pattern stitched in. The fuel tank is originally intended for an XR750 but has been modified to accept a fuel pump to feed the needs of the modern engine. Then the tedious task of cutting down the wiring loom to the bare basics began. Before a set of LED lights, front and rear were neatly moulded in place to keep the boys in blue happy.

The 315lb weight and race winning technology mean this bike seriously hauls ass, but it also wins trophies on the show circuit and the man who helped make that a possibility is Bert’s Graphix who laid down the eye-catching colour, “I had him paint my friend Jessica on the tank and the name of the bike Nightmare,” Ryan smiles. But those grins don’t end there, “This bike wasn’t built to be babied it was built to be hammered on and abused. Anyone that rides it falls in love and says they need it.” Which is no surprise, as this is a genuine race machine capable of rolling up to compete at an AMA Grand National but just so happens to spend its days destroying the streets instead. 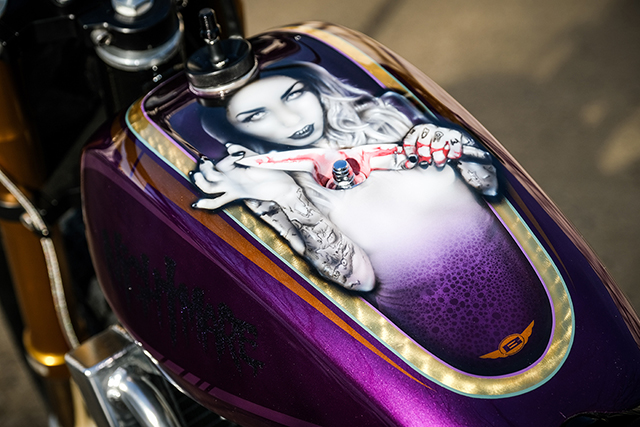 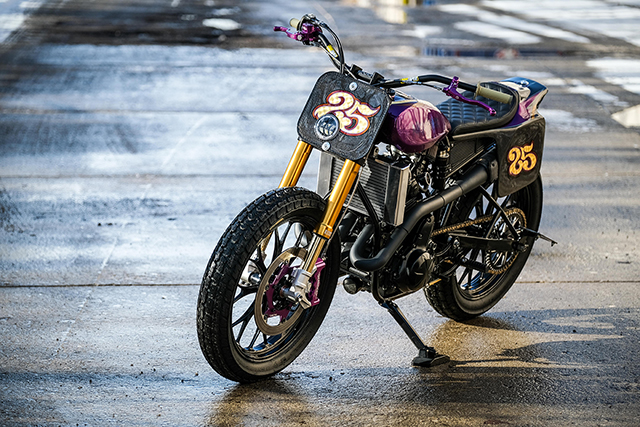 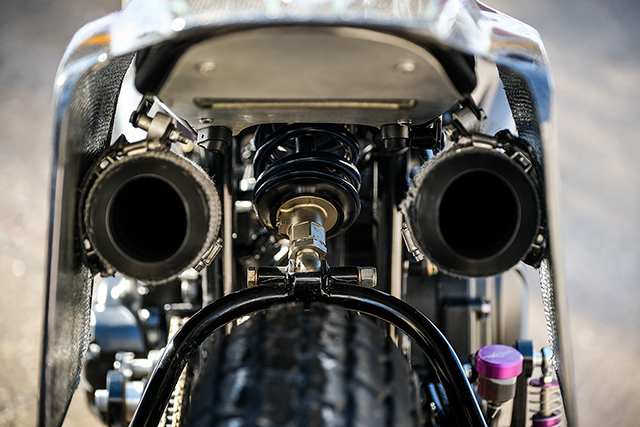 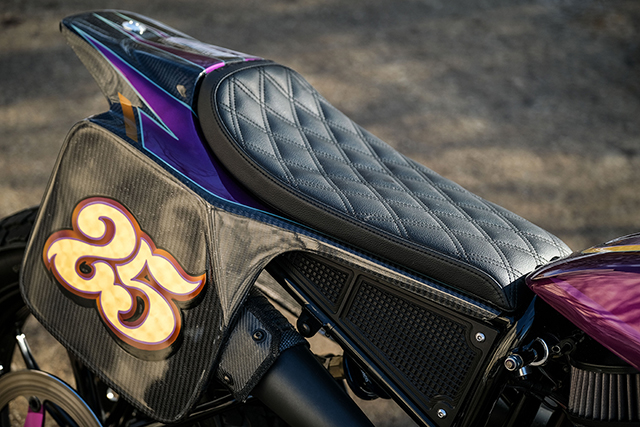 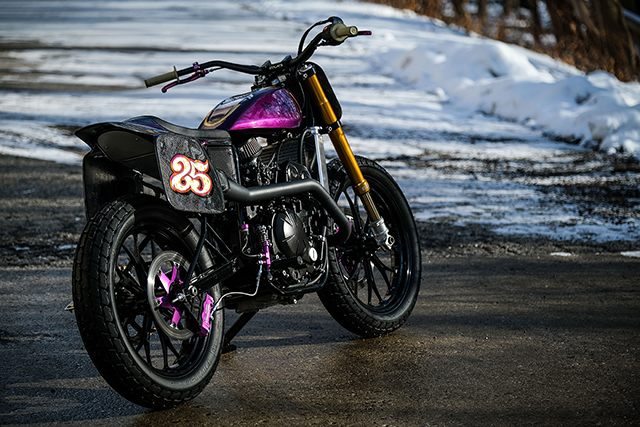 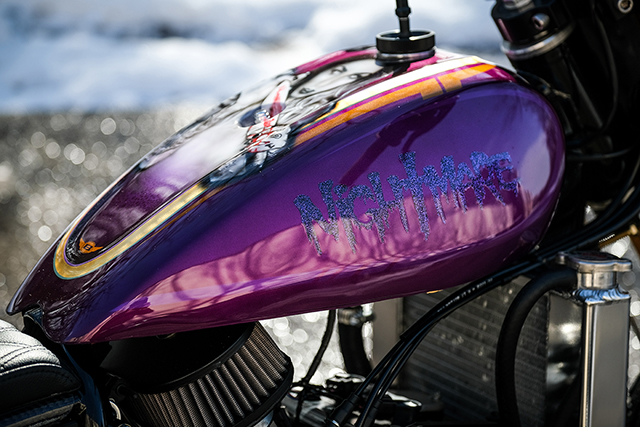 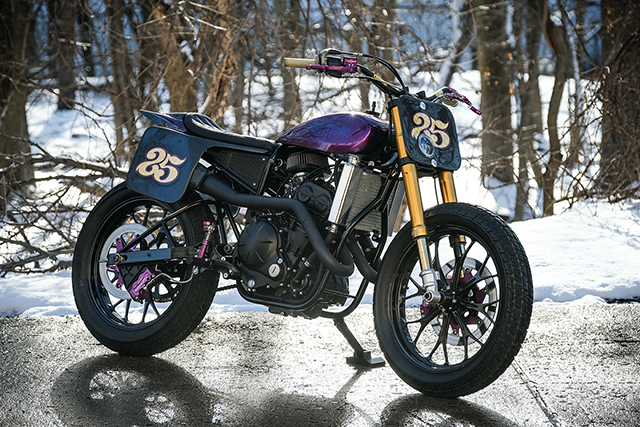 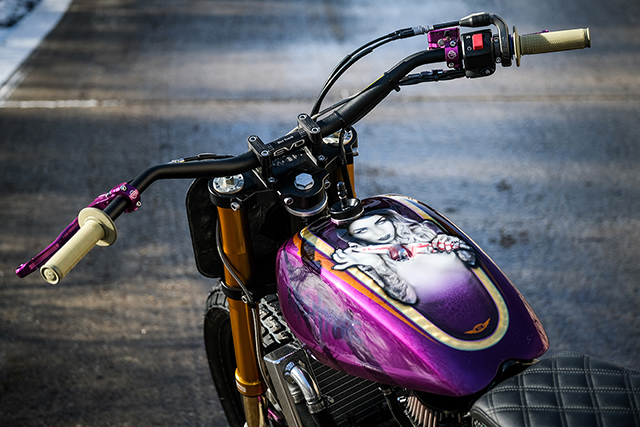 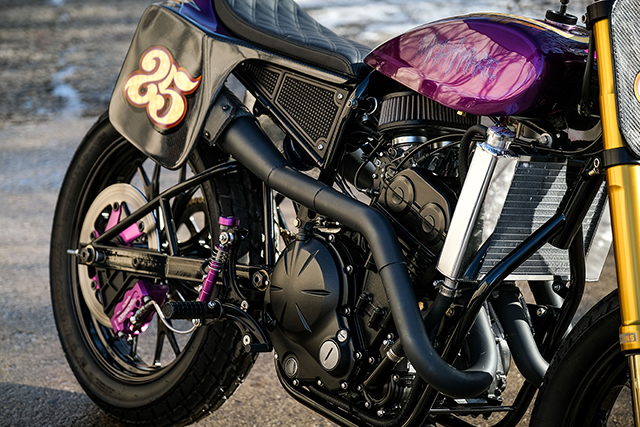 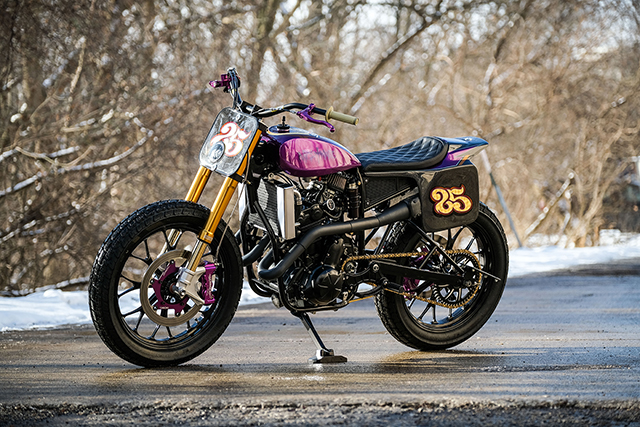