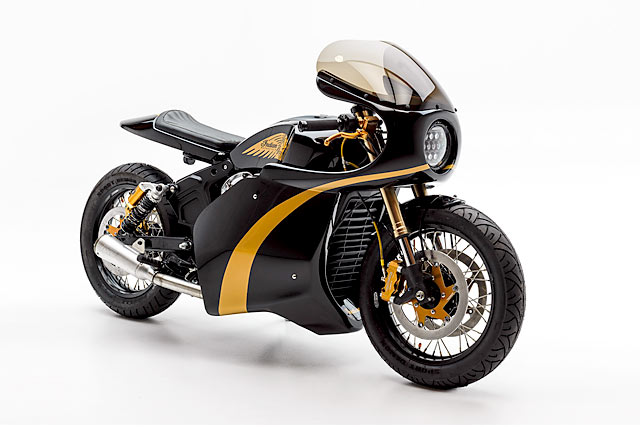 For any motorcycle enthusiast, the idea of being given a brand new motorcycle for free and cash to customise it is a dream come true. But when it happens and you’ve finished pinching yourself, that yes this is real, there comes a moment when you realise now you have to produce the goods. As part of Indian Motorcycles Wrench Build Off each contestant was given a new Scout Bobber and $10,000 to spend; and PJ Grakauskas of Chi-Jer’s Vintage Bike Works was up for the challenge and in for the fight producing this stunning Vintage Racer with all the fruit. What makes PJ’s achievement so special to be even chosen by Indian in the first place is he has a full-time job as a safety inspector, is a committed husband and father and builds bikes in a tiny shed in his backyard. “Never in my wildest dreams did I think I would be building a custom motorcycle for such a great company with a storied history. It’s an honour and a privilege to represent us little guys working in their small garages and sheds. I am truly humbled by the whole experience.” To pick up his brand new 2018 Indian Scout Bobber, PJ headed over to Bair’s Powersports in Ohio and then it was back home with just 12 weeks to get everything done. Inspired by classic Grand Prix bikes it was the fairings that took up the bulk of the time. “I had them all sorted out until my Pops (part of Chi-Jer’s) decided to jump in and change them. A big part of the work is doing the math and assessing what will work and won’t. Then it’s placement of parts while maintaining the design lines,” he explains. The custom and handmade fibreglass moulded full fairing, with belly pan give the Scout a look like no other we’ve seen so far, with the chunky radiator surround nicely hidden. The stock tank was re-worked by Jesse at Raw Iron Choppers who cut the metal and created a perfect set of knee dents. While the flowing fairings get a nice racing touch with custom quick release brackets. Putting a little cafe in the racer is the design of the rear seat and the good folks at New Church Moto took care of the upholstery. As a stock bike the Scout’s foot controls are at the wrong end of the equation and a team effort sees them relocated so well you’d think it was a factory option. A front fender from Cognito Moto finishes the body work and the powder coating would be sent over to 6th City Cycles in Cleveland. But great paint requires flawless preparation and before he wielded his spray guns, good friend of Pipeburn Kacey Elkins of Krossover Kustoms worked his magic. The result is simply stunning with the gold logo and graphics matching the bikes hardware and the glossy black as deep as a bottomless well. From the factory, the Scout is not exactly the sort of bike you’d be looking to take onto the track and only a major suspension overhaul would suffice. The front end comes from a 2007 Suzuki GSXR with its fully adjustable forks allowing the Indian to be really dialled in. Allowing them to fit to such a radically different frame comes with the help of a 50mm offset pair of triple trees from Cognito Moto. To control the rear end PJ went straight to the best in the business with a pair of 12″ Ohlins shocks, with remote reservoirs giving a plush yet purposeful ride.

[superquote]“From the factory, the Scout is not exactly the sort of bike you’d be looking to take onto the track.”[/superquote] More bits from the Cognito Moto catalogue, this time in the form of a front hub to suit the GSX-R conversion, allow for an 18in Sun rim to be laced up with stainless spokes. While at the rear an Indian Motorcycle accessory hub gets the same stainless spoke and 18″ Sun rim treatment. A set of Pirelli Sport Demon tyres gets the job providing greatly improved grip with the ability to handle the extra weight you don’t find on a sportsbike. While hauling that all to a stop is a primo full Beringer brake system front and rear, including Aerotech calipers and master cylinders in gold. The big 60° V-Twin that lurks beneath with its 4 valve cylinder heads is willing to rev more than most American twins and PJ has taken full advantage. Peak power comes at 8100rpm so a more free-flowing exhaust offers an instant boost and the custom 2-into-1 system that finishes out in an aluminium SuperTrapp muffler looks trick doing it. The tyre shredding torque gets a bump too with a Zipper’s intake offering 40% more flow than the standard airbox. Importantly PJ has fitted a Power Commander so the Indian has been properly tuned to take maximum advantage of the engine modifications. The final assembly of the racer took place at Skidmark Garage in Cleveland surrounded by good friends. With Woodcraft clip-ons and Analog Motorcycles rear light and mini LED signals taking care of the accessories. While a Joker machine sprocket cover shields the 530 gold chain conversion for the final touch. “I tried to incorporate people and companies that are either local to me or have supported me in the past. You can never have too many friends. A lot of paying forward was done and will continue to do so. It’s why I’ve always said that building bikes is a collaborative effort,” Smiles PJ. Bravo!