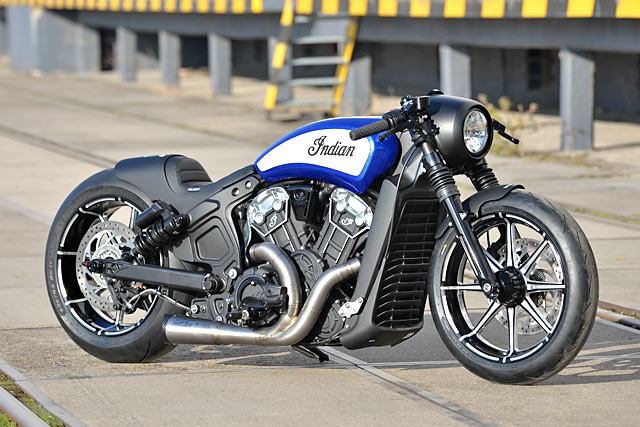 Marcus Walz has a sort of infectious energy that both inspires and amazes. It seems like every time we talk to him, he has two or three new bikes ready to go – each one as different and as interesting as the last. It’s a Norton. Then it’s a BMW. Then it’s a Ducati. And as of right now, it’s an Indian Scout Bobber that’s been prepped to tear up you local biker hang-out in a fashion that would bring a smile to Burt Munro’s face and tears to the eyes of the opposition. 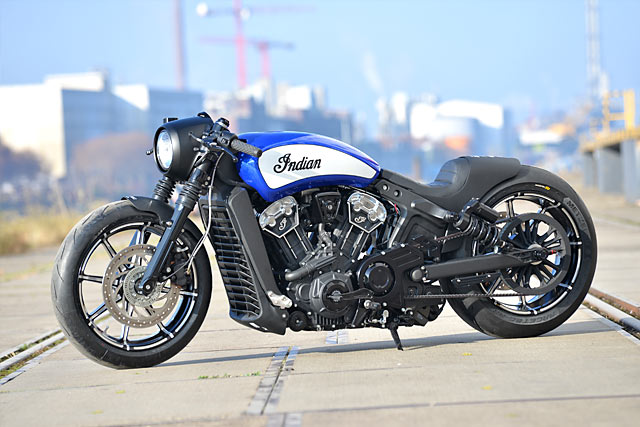 “Yes, we do have a lot of work on at the moment,” says Marcus happily. “We’re working on a modern Norton which hopefully will be finished in spring 2019 and there’s also an old, race-inspired BMW which we’re calling ‘GT1’. We have already finished the chassis build and now we’re working on the body and the suspension.“ We’re pretty sure the wait will be worth it. 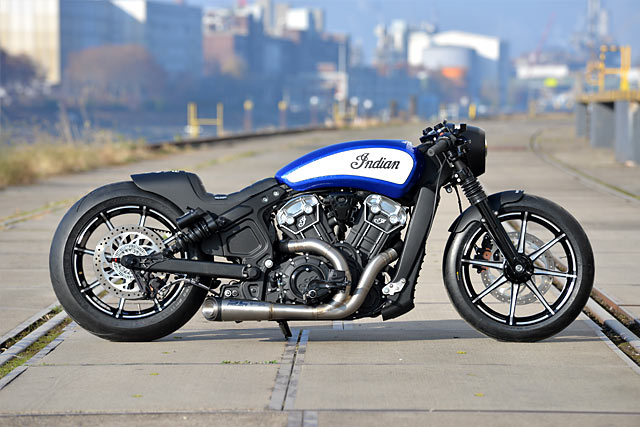 But let’s focus on the bike du jour. With 20 years of custom bike experience, a quick Google will reveal that Marcus and his ‘Walz Hardcore Frames’ have been hot poop in the US of A since the early noughties. So much so that forum fans began swapping the phrase ‘drag style’ for ‘German Style’. To say that Marcus has some experience with street drag bikes is like saying that Trump has some experience with fake tans. So Marcus put this knowledge to work on a 2018 Indian. “It was a team effort in conjunctions with Indian Germany and Europe’s leading US car specialist, Geiger Cars. They built a matching Camaro ZL1 with over 700 horsepower.” 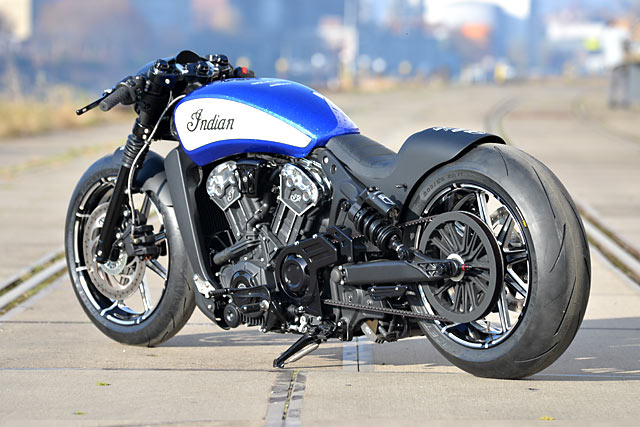 “I’ve been building bikes for a living for around 30 years. Up until 2010, I only built customs based on my own frames. But I sold the rights and patents for those bikes in 2010 and then focused on building cafe racers, scramblers and roadsters, mainly on BMW, Ducati and Triumph bases. So when Indian asked me to build them a custom, I immediately thought it would be a cool idea to build a genuine Walz drag-style bike, but as an Indian and not a Harley.”

[superquote]“And because of my racing background, all of my bikes have proper suspension. This Indian is no exception.”[/superquote]

From the beginning of the build, Marcus had planned to use the opportunity to transform his ‘drag style’ from a 20th Century look to something more suitable for the 21st. “So we started with completely new bodywork. The tank is a bespoke part, rather than a modified stock item. It still has that typical Indian design, but it is about 14 centimetres more narrow and it has lost around 6 centimetres from the side profile. You have to look twice to note the difference, but when you have a stock tank right beside it, the difference is incredible.” The rear section is also a newby and gives the bike that Walz Drag Style look together with the WalzWerk handmade seat. “And because of my racing background, all of my bikes have proper suspension. This Indian is no exception.” 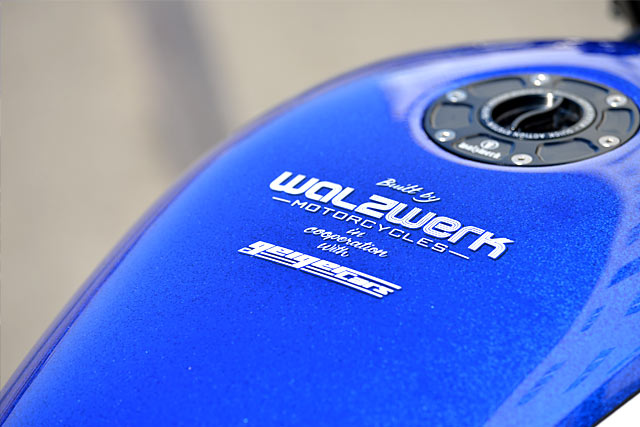 For the suspension, Walz teamed up with ‘Touratech’ – one of Germany’s top suspension manufacturers. “They have a new subdivision called ‘Black-T’ that developed a custom set of fully adjustable rear shocks with only 10mm of travel. It keeps the bikes design as low as possible but which still gives a fair amount of riding performance. The front end is also lowered about 70mm with a newly developed Black-T cartridge system.” The motor was dyno tested and mapped to work with the new air box and a fully handmade titanium exhaust system, manufactured at the race department of SC-Project in Milan using a genuine WSBK S1 silencer and 60mm header pipes. 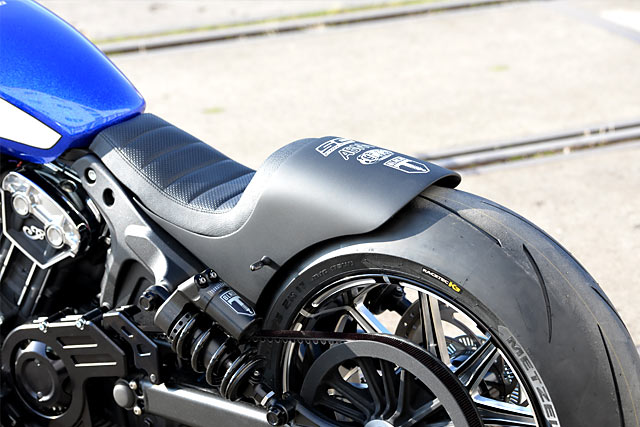 Yes, Marcus’ experience with choppers pushed him towards some massive diameter wheels, but he eventually (and thankfully) settled on these seventeen inch units from CCI wrapped with a set of Metzeler K3 Supersport tires to complete the racing treatment. “The ABM clip-on handlebars use a special mid-control system, meaning that the brake calipers stay stock; we just swapped the hand brake‘s master cylinder to a radial ABM WSBK unit. The stock Scout Bobber headlight housing was modified and lowered to fit the clip-ons and to accept the digital MotoGadget speedometer. Then the stock upper triple was machined to get rid of the old handle bar mounts. The belt and pulley cover was also machined from a solid block of aluminum.” 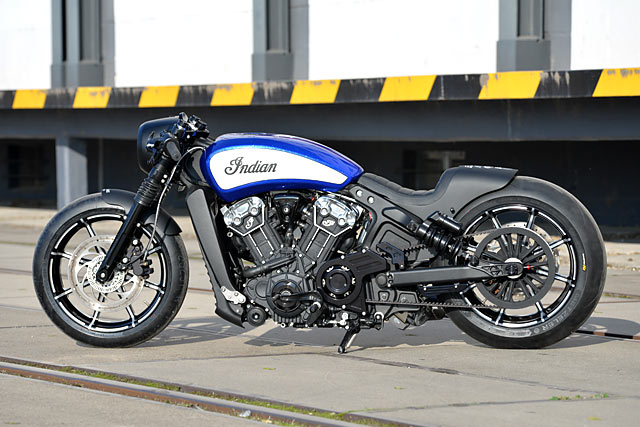 As always, the manufacturing of the new tank gave Walz a headache or two; the factory fuel pump was huge and needed to be properly integrated in the new design. He notes that he would have loved to make an even smaller tank but the fuel pump just wouldn’t have fit. “We thought also about an external fuel pump, but there was simply no space to hide it.” And his favourite part of his new creation? “I like the fact that the bike is so low but still so rideable. The stance is really incredible, especially when the bike is parked beside a stock Indian.”