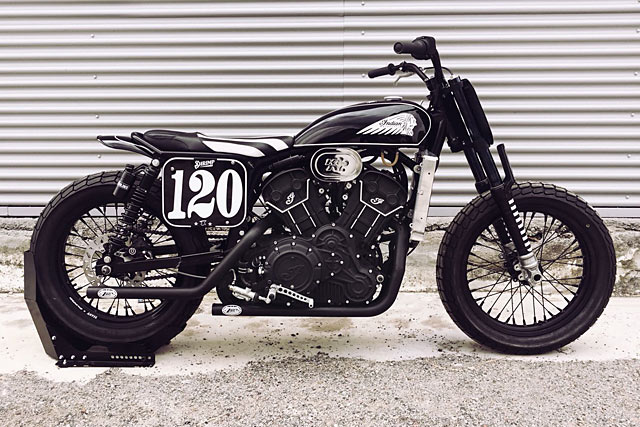 In the earliest days of the 20th century, right across the Continental United States, motordromes were filled with thousands of spectators watching the fastest men on two wheels battle it out on the board track. Amongst the powerhouse factory teams, the big corporate sponsors and the inevitable carnage and death, was a remarkable kid racer. Nearly 100 years on, Indian Motorcycle company has turned to one of Europe’s premier custom workshops and the World’s best suppliers to honour Albert ‘Shrimp’ Burns. The Glimmer Twins of Anvil Motociclette have handcrafted a Flat Track Scout Sixty Racer that’s world unveil will happen today in France the moment this article goes live. Indian has spared no expense in making this special tribute come to fruition with France’s Wheels & Waves festival chosen for the reveal. But the ‘Shrimp’ as it is known is no static display, with talented Italian flat track rider, Emanuele Marzotto, drafted in to race the Indian in the El Rollo flat track race this Sunday. First however a new Indian Scout Sixty was shipped to the Northern Italian workshop of San Marco and Phonz to begin the journey.“One of our greatest passions is to read about motorcycle history. During our research we found out about Shrimp’s story and we were suddenly fascinated by him.”

What captivated the pair was the short life of Shrimp Burns, who started racing professionally at just fourteen years of age. The California Kid was winning so often his adult rivals tried to have him run out of the sport. Known for riding injured, the wonder boy took victory at a major meet despite riding with a fractured collarbone and broken shoulder. Signing with Indian in 1920 Shrimp continued his remarkable career, a spectacular win on the new Beverly Hills 1.25-mile coming when he went from mid pack to winner with an incredible last lap move. But just two days after his 23rd Birthday he died on track in Ohio with his fiancé watching on having come to surprise him.

With such an astonishing inspiration, the Anvil team decided the only way to do the build justice was to add some members to the crew and brought in a frame builder, engineer, mechanic, assembler, upholsterer and body shop mechanic for the epic 300 hours of work. While San Marco and Phonz kept tweaking the design, the process of building the frame for a flat track racer began. With the headstock in the jig the main chassis is made up of a single large diameter backbone and down tube. The equally sized centre post supports the lightweight subframe that incorporates a battery box and shock mounts.

[superquote]“With such astonishing inspiration, Anvil decided the best way to do it justice was to add some members to the crew.”[/superquote] A custom plate supports the swingarm that has been designed to accept the twin shock setup and allow for wheelbase changes. And when it came to the suspension the first of the big suppliers was there, with Ohlins providing the stunning black traditional front forks and twin shock rear end. To mount the big dollar forks a set of custom triple trees was fabricated from billet alloy with integrated risers for the bars. A set of new lightweight hubs was sourced and laced to a set of alloy rims wrapped in Maxxis DTR-1 race rubber; with all the hardware powder-coated Anvil’s favourite colour, black. With the unusual experience of having so much help, this allowed the Anvil pair to focus on making the body work perfect. As they say “It’s been an amazing experience for us, we had it clear in our minds about our project from the beginning and we followed it. We’ve been inspired by Albert ‘Shrimp’ Burns, so his story made us strong and focused on the final outcome.” The hand beaten steel tank takes centre stage with a matching rear guard, signature in execution and style for the old school pair.  Both are finished in black, gloss a slight departure from their usual matte look, with an old school Indian logo in white to complete. Having waited patiently on the workshop bench the beautiful 61 cubic inch Indian V-Twin with four valve heads could finally be slotted into the frame. Custom mounts were fabricated to secure the engine and insure its mass was as low and as flat in the chassis as possible. To get the right bark Anvil joined forces with Zard to create a simple yet rorty exhaust, black of course! While being a water-cooled engine required some extra thinking and the solution is found in a set of twin radiators that are secured on each side of the down tube.

To finish the engine a K&N air-filter keeps the dust out and with the new breathing mods, a final tune sees the Indian twin producing bucket loads of tyre turning torque. A Newfran clutch means there won’t be any slipping and Pakelo came to the rescue with a custom designed oil. With only a rear brake to operate, it all has to work flawlessly and a drilled rotor is clamped by a Brembo caliper with a custom pair of rearsets taking control. Wrapping up the build meant bolting on the number boards and fitting the very Anvil-esque black and white leather seat. The completed project is a remarkable representation of what the world’s best in the industry can achieve, with the added inspiration of an Indian team legend. Despite the pressure and stress the boys couldn’t be happier “We love that we managed to create a real Anvil style on this Indian Scout Sixty, it represents our style and moreover, we are very proud to have redesigned the bike, not only customised it.” But there is one man who just might be the happiest of them all, the pilot of Shrimp the Indian Scout. “This is an honour for me to retrace the story of a great rider. While Anvil Motociclette has focused on creating an amazing bike, my aim is to go beyond beauty and to race as fast as I can,” smiles flat track star Emanuele Marzotto.