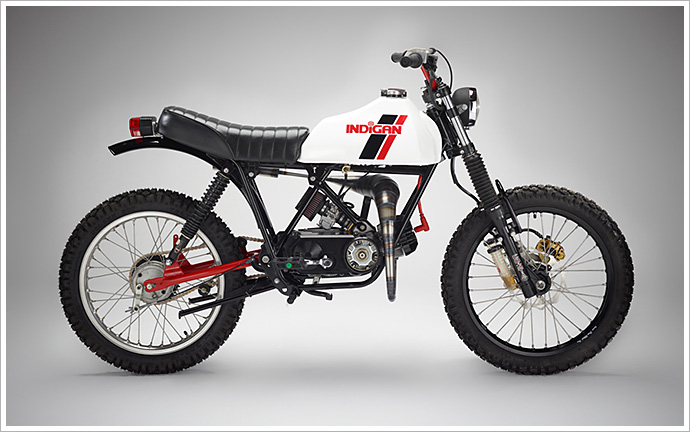 Here’s one that we got our hot little hands on a touch too late. We got all steamy under the collar when we first saw it and then had our high hopes deflated like a bunch of horny teenage virgins interupted by the fuzz when we realised that it had been published elsewhere (damn you, Wes… damn you to hell) and kind of gave up on it. But you know what? After much burning of the midnight oil we thought, “damn it, she’s just too bloody smokin’ to not punch her dance card (do you punch dance cards? Note to self: buy a nice dress and get out more often) and let her take a turn around Pipeburn’s firey dancehall. So here she is. Wicked, isn’t she? Here’s her man – Daniel. He’s the owner of 1977 Mopeds, a shop we’ve touched on briefly before. “The Indigan Diablo, the first custom from Indigan, a brand new Motorcycle/Moped style parts company. The Diablo started as a pipe dream, as most moped projects do. I wanted to have a moped that was big and and off roadable. Not the first thing you think of as a moped.” “I wanted to have a moped that was
big and off-roadable.
Not the first thing you think of as a moped.”

“After hunting around for a donor bike, it became apparent that I was not going to be able to find what I wanted.  So, in starting to put together a bike from scratch I basically mixed and matched all the parts from all the mopeds I liked and then with the help of the Indigan production team we made the parts we couldn’t find.” “The motor was built for me by Bobby Costello, a team rider out of Georgia. Devin Biek made the pipe for the bike, Richard Worham designed up the custom parts, and Kevin Byer put it all together.” “The final bike is astounding in person, it is fun, aggressive, and makes you smile to see it. The pedals look like a vestigial limb, but make for a great spot to put your feet. There is only one lever on the bars, as it is runs a CVT clutch.”