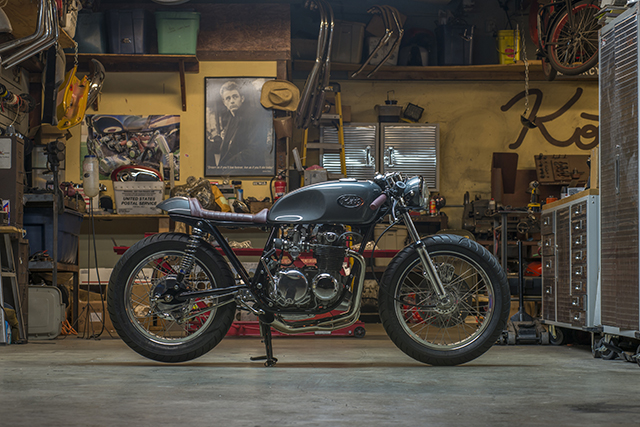 Last year was a busy year for Dustin from Kott Motorcycles in LA. He built a shed load of bikes – around 12 to be exact. We thought we would ask him a few questions about his love of old Honda’s, what the future holds and showcase some of the immaculate café racers he has built in the last 12 months. Enjoy…

Can you introduce yourself to our readers? What’s your background?

My name is Dustin Kott of Kott Motorcycles. I am thirty seven years old and I am the owner and operator of a relatively small motorcycle shop just outside of downtown Los Angeles. My personal background is that of a Jack of all trades and master of none. I say that because I have had my hand in multiple trades, jobs and hobbies throughout my life and as I progress and grow in any one of them the more I realize how little I know and how much more there is to learn. As far as the motorcycles go however, I was very fortunate to have been around them at a young age. Even more so, I believe the real privilege was to be around older men who loved machines and committed themselves to either keeping them alive, restoring or improving them and passing that knowledge and passion along. I recall being captivated by the artistry of motorcycles which seemed to be innate in them due to the exposure and visibility of their design. Also, equally as important was the mechanical truth that one has to align with in order to achieve the end goal of being able to ride and bring life into a machine. Simply put, a combination of creativity and subjectivity along with mechanical guidelines and parameters. I am presently at a somewhat forgettable hotel in the city of Cleveland Ohio. I was fortunate enough to have built a custom motorcycle for Progressive Insurance this past year, and they have flown me out to a number of different cities to represent and speak about the bike at the touring International Motorcycle Shows. My first machine was a 1966 Honda S-90. I remember that motorcycle made the world feel like a big place for me. Even though the bike sounded like it was coming apart at 60mph, I knew I had found a great way to escape in my own mind, or perhaps from it. That bike was given to me by my Grandfather. You obviously have a love for old Honda CB’s. What’s the attraction?

I have an attraction toward the sixties and seventies era Honda CB’S for a number of reasons. The truth is that when I really started to look into getting a real motorcycle in my late teens I had an affinity toward anything vintage. Having been around the beauty and mystique of the early English twins and always having a genuine appreciation of early American board track racers. The sobering reality is that you cannot have champagne taste on a beer budget. The Honda CB was the clear and obvious alternative. During the late 90’s I remember seeing pages of CBs listed in the paper and at that time they were only $300-$500, usually titled and running! That cost has since then quadrupled here in the great golden state, but it has proven to be the perfect machine to use in order to emulate the silhouettes of the previously mentioned bikes that I was so influenced by. I have always pulled inspiration from the idealism of simplicity. I found that the bikes that I have spent time restoring and modifying only seemed to improve as more and more of the encumbrances dissipated. I have occasionally received underhanded compliments concerning the redundant simplicity of my builds but I remind myself that more than half of all my efforts are details that no one will ever even see. This also is an inspiration, to focus energy into aspects of a build that are unlikely to be visibly recognized or appreciated. I believe that one of my favorite bikes that I have built is called the “Naked Speed” 750. The reason I appreciate that machine so much is that the build represented an attitude of no limitation. It is unfortunate however that on some occasions whether it be money or time or creative restrictions, one may have an idea that just never reaches fruition. On the Naked Speed build there was never a moment of hesitation when certain ideas posed adversity that they were not immediately and successfully addressed. I feel like that bike was a real turning point of professionalism and dedication in my shop and my business.

I have had an amazingly memorable experience with motorcycles throughout my life so far. There is no doubt that my fondest memory to date, is that of riding a 1971 CB750 across the U.S with a close friend of mine about ten years ago. I recall some people, shortly before we embarked, placing standing bets that neither one of us or our bikes would make it out of the garage, much less, to New York city, which was our final destination. There is a great photo of both of us on our bikes right in the middle of Times Square. That was a great moment! There really is nothing more fulfilling than silencing a critic! I always knew that it was just a matter of time before the major manufacturers would release a compelling and relevant machine that could compete with the trending vintage and custom movement. Out of all the manufacturers I think that Triumph and BMW have successfully captured the aesthetic, stance, and ride quality most appropriately. I recently rode the RnineT and thought to myself that this would be the machine I would buy if I decided to get a modern motorcycle. What bike are you riding right now?

My present daily rider, ironically, is an almost completely stock 1975 CB750 Supersport. I very rarely come across a machine that has really survived the test of time. Most older Hondas were ridden hard, neglected and then left for dead. This particular bike was in very good condition with early seventies electric blue paint and yellow pinstriping! I had the inclination to leave it alone for now and just enjoy how fun a motorcycle it really is. In just eight months I had put nearly 8,000 miles on it. Dream bike if money was no option?

I think that if I had a chance to own the “proverbial” dream bike I would love to have one of the very few Britten race machines. John Britten was a mechanical and artistic genius who was able to successfully translate that genius into the motorcycle history books. Apart from the rarity and hand built aspects of the bike, I always admired the imperfections in them. Even though symmetry is beautiful, sometimes I think that as human beings, the emotive and fragile qualities that misinterpret symmetry tell a more compelling story. When one observes any one of the ten Britten motorcycles in existence, each is different and fallible, but one would have to assume that they were intended to be otherwise to think that a mistake had been made. Perhaps the flaws are the most unique and identifiable qualities about each one of them. That, I believe is truly special and priceless. What’s up next, build-wise?

This year (2016) I am really dedicating myself to development and refinement of skillsets. The overall output of custom builds from the shop will probably turn out to be minimized as a result, this of course is the cost of creative growth. I want to refine my welding and machining capabilities but moreover start to increase my creativity and demand through more advanced metal shaping. If someone tries to pigeon hole me into describing what I do, I am forced to simply point at a finished motorcycle and declare that everything that made this machine what it is. To individualize and perfect each one of those skills and to in fact finally become a master of all and a jack of none would be a desirable outcome.