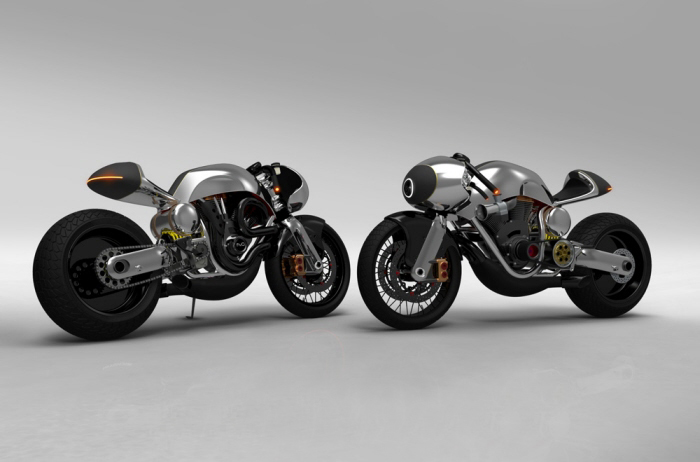 We have all seen amazing concept bikes created by Industrial Designers that never see the light of day. They are created on the computer and spend the rest of their days in the pixel world. Well, this Fiv0 concept was designed by Gregory Thüne who is trying to take it into the next stage — production. We asked Greg a couple of questions about this stunning bike and we cross our fingers and hope it does manage to do a “reverse Tron” and make the jump from pixels to the real world.

I’m a professional Industrial Designer (Canadian by birth) working with Astro Studios in San Francisco — I studied ID in the 90s with the thought of designing my own motorcycle, then really dove into researching the “hows” and “whys” behind designing a functional bike from the ground up in the early 2000s while designing toys, consumer products, electronics and the like, cause you know… a man has got to eat.

So this isn’t the first time you’ve designed a motorcycle?

In 2004, I finished my first overly thorough bike design I called the Ferine (pictured below). This bike was modeled all the way down to the compression ratio and I built a 1/4 scale model. I realized that the cost of producing this machine would be astronomical — also, my needs and taste in motorcycles had changed by then, so I drew one quick sketch of the bike that I felt reflected what motorcycles represent to me. At the time and currently, I’d say the café racer embodies all that is spectacular about Motor-Cycles. Your latest concepts look like a fusion between a vintage café racer and modern race bike. What was the inspiration?

When I designed the second bike (the Fiv0), the inspiration wasn’t the café racer because those are mimicking 1950s race bikes, so I only looked at the 50s era bikes which to me was a great time in “amateur” aerodynamics, innocents and passion in the pursuit of speed on two wheels. The name Fiv0 is a short (or long depending on how you look at it) way of saying 19″50″ Five-Oh or Fiv0. Looks like a lot of thought has gone into the mechanics. Can you run us through some specs?

Yes, this bike was based on a 45 degree V-twin, 55in wheel base, a conventional rear suspension and the single telescoping aircraft style front end. The intent was to have a single monocoque upper chassis bolted to a simple space frame lower-end that could be modified for a variety of power plant substitutions. The Engine shown is based on Randy Torgeson’s 106″ HyperMotor (in external dimensions) with some intake modifications. You said you are about to go into stage 2, which takes it closer to production. What does this involve?

Money and time, I gotta make a few new friends to help get this thing going. I started to collect components for the build back in 07, but I met a girl whom I now call my wife and there are only 24 hours in a day…

Lastly, what do you ride?

We love this Fiv0 concept bike and hope Gregory finds the money and time to build it. What do ya think? Worth building for real or do you think it should stay on the hard drive? You can check out the rest of Greg’s impressive portfolio here.