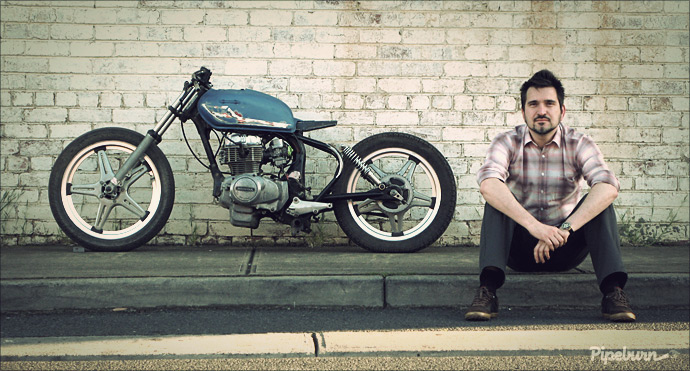 Can you tell us a little about yourself and your background? How does your profession overlap with building bikes? I’m an industrial designer currently working in the automotive industry. There are parallels but not many overlaps. Like any designer, I get paid to have a good eye for detail and proportion but I certainly don’t fabricate at work, nor do I get to work under such open-ended circumstances. The two courses I did last year (welding and panel beating) helped with the build more than anything!

We’ve all seen “Much Much Go” – can you run us through the build? What was the original bike and where did it come from? My friend had offered this 1979 Honda CB250T to me before, but I was daunted by its cobweb and dirt encrusted state. Without instruments, carburettors, throttle, chain, lamps nor most of the body it was an unknown entity that looked more like a money pit than anything else. When the call-out for the competition came I found out a little late and when I struggled to find another donor bike (possibly requiring a little less work) I took up the offer and was left with 55 days to build the bike. I liked the look of the bike – it had a big tank, a substantial block for a 250, and interesting wheels which we don’t see on many customs. The first few days were spent stripping down the bike and coming to terms with what I had. I wanted to keep faithful to the brief – “making the most with the least”. The brief didn’t mention that the bike needed to be roadworthy which opened up possibilities and kept me from needing to spend money to replace the  missing gauges and lamps. I have chopped the back of the frame off and mounted shorter suspension struts in a way that allowed the bike to be dropped about 175mm at the rear. This naturally rotated the frame and raked out the front end but it wasn’t enough, I wanted a more balanced look of the motor sitting equally between the wheels. To achieve this I cut a wedge out from the neck and raked the forks out further. I made my own seat pan and subframe to get the cantilevered look which would keep the visual mass of the bike equal between the wheels.

The dinted tank was reshaped to fill in the missing flip-up cap that was a styling feature of the original bike. The handlebars have been mounted under the top bridge and the footpegs set back to the pillion position. I made my own linkages. I wanted the exhaust and intake to sit high and match so all the tubing was gathered in and around the motor, in one continuous form. $735 was spent in total. The rest was time, hard work and plenty of late nights. Luckily I had lots of good advice and a helping hand when I needed it. All hail the lord of the comstars

What inspired the bike’s design? How do you do your concepts? Sketches? Photoshop? Overall, I wanted this bike to be a nod to Japanese customisation, but at the same time I didn’t want it to be like any bike I’d seen before. During the first week I did a Photoshop rendering of the bike to nail down the details like the exhaust. For my previous project, an SR, I did lots of hand drawn sketches but there just wasn’t time for that approach here. Many of the ideas seen on Much Much Go were floating around in my head and sketchbook for years and have come from many sources, which I think is key to coming up with something a little different. What’s the story behind the tank artwork? The spectacled guy with the anti-gravitational hair is based on a sign that I photographed in Tokyo many years ago. To me he symbolizes the Japanese whole heart adaptation of cultural movements.

Did you really have a bald front tire on it for the show? Why? It was just a little bald – but that’s the way it was when I got the bike and changing the tires for the show would have been a disproportionate expense when compared to how much was spent on the rest of it. I wanted the wear on the tires to provide some of the ‘before’ and ‘after’ contrast.

What’s it like to ride? I’ve only ridden the bike as a mock-up – the final bike was assembled just a few hours before it was driven to Sydney. The seating position is comfortable and for me familiar as I set the seat and foot pegs to match my SR, but with the higher handlebar position, Much Much Go should be comfortable! Much Much Stop – the bike in it’s original condition

What’s some of your all-time favourite bikes? I like Ducatis of the ’70s and ’90s, ’60s BSAs and custom bikes from builders like Gravel Crew and Heiwa in Japan. I also like motorcycles with interesting motors like that of BMW and MotoGuzzi – these bikes have great potential for customs.

Sydney and Deus get a lot of limelight in terms of Australian custom bikes – what’s the scene like in Melbourne? Motorcycle building in Melbourne is harder to define because few big players have emerged that can claim to categorise the scene. Customising is alive and well, just a little further underground.

What other bikes have you built or are you building? What other bikes do you own? I have a Yamaha SR400 cafe racer. It’s on a silver frame with a raw aluminium tank and side covers. It’s very metallic looking but a much less ambitious bolt-on custom. Before customising the stock SR I restored a 1969 Honda CB175 which I still have but no longer ride. Much Much Go is the third bike I’ve worked on but the first bike I’ve taken a grinder to – in a way, it’s really the first bike I’ve built. I’ve learnt so much doing this bike. Obviously you can’t ride M.M.G. on the roads; what are your thoughts on “functional” bikes versus “show” bikes? I have a fascination with show bikes because they are an opportunity to express imaginative solutions that are not restricted by the kind of rules that bring a sameness to most bikes. I have more of a problem with the ‘theme’ bikes that we see on reality television.

What’s your next project going to be? I would like to take the ideas that were rushed into Much Much Go and refine them further. Many of the ideas seen on the bike have been in my head for years and I know I could do them further justice.

Finally, what’s your favourite bike film? I like Girl on a Motorcycle – the soundtrack is great too.