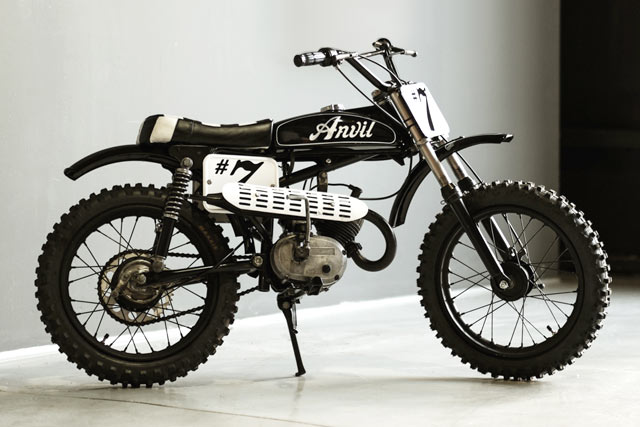 Like a trippy ’90s Mandelbrot set, custom bike inspiration has a rather magical ability to multiply almost infinitely the more you look at it. Just when you think something’s been done to death, a creative mind will lightbulb on an idea that opens up a whole new room for other builders to play in. When customisers thought that scramblers were getting old, they looked to ‘60s and ‘70s Enduro and Motocross bikes for greener pastures. So when Italian moto magicians Anvil Motociclette grew tired of that, where to next? Il Bambini, that’s where. 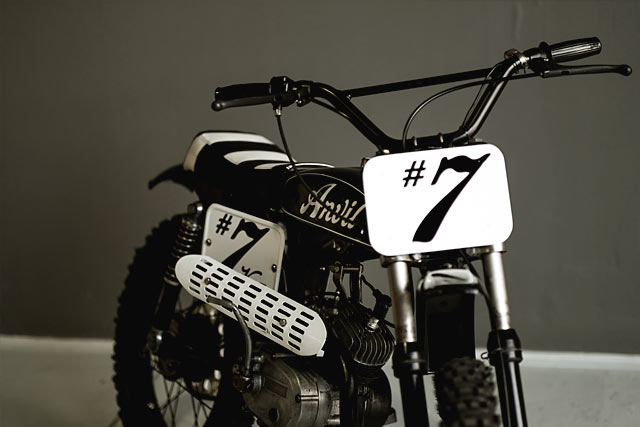 In their usual deadly stylish Milanese manner, shop owners Phonz and Marco talked us through the mix of creativity, insanity and serendipity that led them to create ‘Koz’. “Most of the time at Anvil we reason more with our hearts than the heads. If we were to put it on a scale, the emotional quotient would make up about 90% of our work. This has got us out of trouble  a few times – and it’s also caused a bit as well. But in the end we believe that putting all of our love into what we do has become a kind of trademark that really shows what Anvil is all about.” 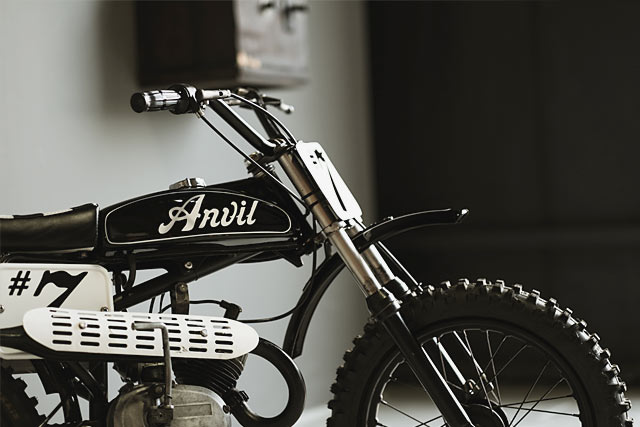 “We’ve been at the markets and seen old, dusty tools that have been abandoned; worn and battered after a lifetime of hard work. Stuff like this drives to the heart of Anvil because we very much see the soul of the object. As an true elder, it must be respected and cared for. In a nutshell, we see it as a kind of emotional rescue and that is just what has happened to the little Anvil ‘Koz’ 50cc.” 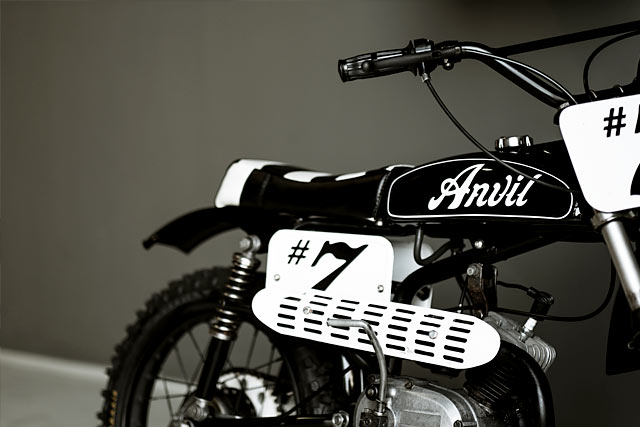 Visiting one of these very vintage motorcycle markets on a miserable, rainy day in 2017 the boys liken the scene to that the of European trench battles of World War I. “There was mud and debris everywhere, mostly camouflaged by the fog and misty rain.” Lord knows why they persisted with the expedition, but we’re lucky they did.

“Trekking through the market without slipping over or plunging into a half meter puddle seemed to be the mission for the day, but for some unknown reason we still pushed on to see what the fair had to offer. And just when we were going to finish our muddy tour, we noticed something hidden under wet plastic sheeting – something wearing small knobby tires. We were intrigued and we approached it to take a closer look.”

[superquote]“And just when we were going to finish our muddy tour, we noticed something hidden under wet plastic sheeting.”[/superquote] 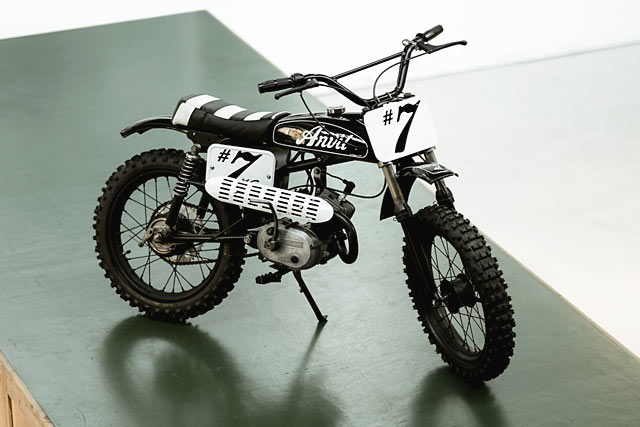 To their amazement, the pair found a kid’s 50cc Italjet M5A minibike. “It was beautiful; it’s shape and proportions would make many a newer bike envious. Marco and I looked at each other and straight away we knew that the bike would have to be saved. And by a happy coincidence, a great friend of ours had told us a few days before that he was looking for a bike for his son. Another thing we believe in at Anvil is that many times, fortuitous situations are created and develop by themselves without you having to push them forward too much.”

“Obviously, this little gem went home with us and we began a total renovation because beneath all that mud there was a fair bit of rust, too. We have completely rebuilt the engine, changed the carburettor, and painted the frame, rims and pretty much every one of its tiny little parts. We also added a racing touch to the small Anvil by making the finish reminiscent of our race bikes, because its owner  – besides being a huge fan of the shop – is also a racer in the Team Anvil.”