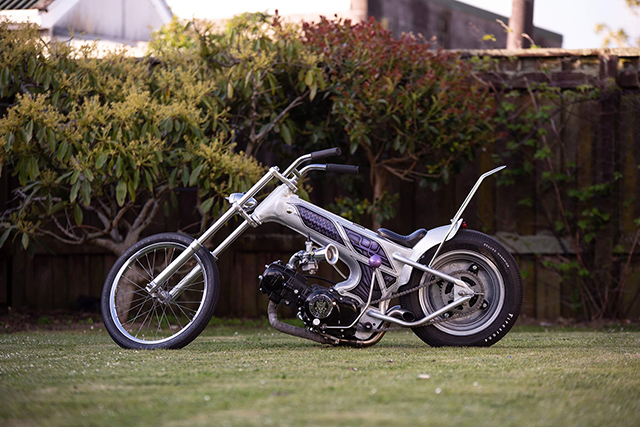 Hogan Jeffs has completed other Honda Dax builds in the past, but none like this. The New Zealand-based builder and member of New Zealand’s Quake City Rumblers, had picked up one of the little Honda runners and was planning on lightly modifying it just as he’d done several times prior, though when the wheel of a small car was haphazardly rolled up alongside the Dax, Hogan couldn’t stop the cogs in his head from starting to turn. 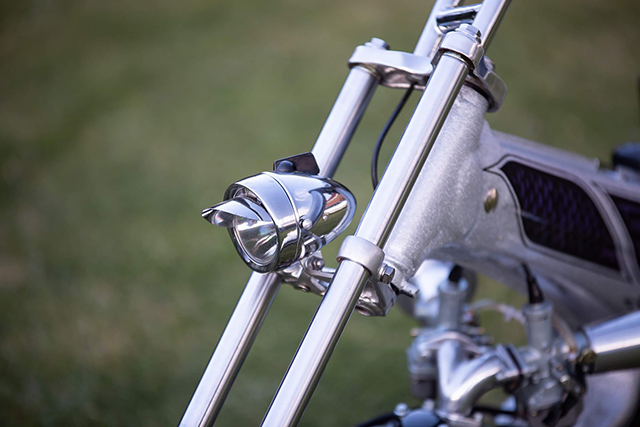 “It was done as a joke, but we quickly decided to see how it looked with some new front forks on it, and from there, thought It could actually really work as a little chopper,” Jeffs tells us.

Hogan started the build with a “1970ish” Honda Dax chassis and a collection of parts. The pressed-steel frame was chopped up and new bespoke sections were grafted in, including a new hard-tail rear-end out back, while in front, a decidedly raked set of CT90 forks were mated to a modified headstock. The Daxxer’s stock set of 10” wheels have also been pulled and replaced with a thin-spoked BMX rim shod in a beefy tire in front, and a Fiat Bambino wheel in back that’s been altered to fit the Dax hub. 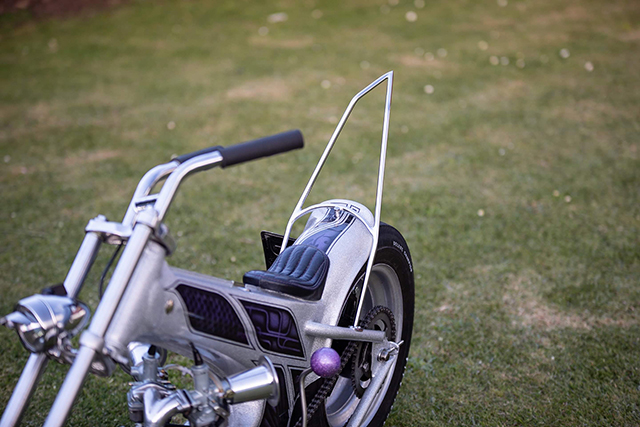 Above the hard-tailed framework Jeffs has whipped up a bobber/chopper-style rear fender that now seamlessly blends into the stretched chassis. A custom leather saddle was also created that rests where frame meets fender, and jetting up from the new hardtail is a set of custom brackets supporting a swept-back sissy bar coming to a sharp point at the top where it meets. A new chromed headlight with a partially-hooded shell comprises the remainder of the diminutive chopper’s new bodywork, though Jeffs has bestowed the Dax with plenty more tricks up its sleeve. 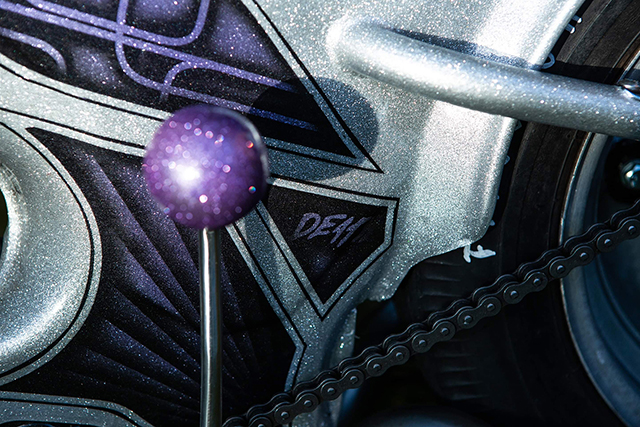 Next, with the body and framework in the rear-view, Jeffs and the gang turned their attention to the Dax’s powertrain. Before being hit with a coat of high-heat-resistant gloss black and a custom cover, the air-cooled OHC mill was treated to a nifty dual carb setup, with polished velocity stacks in a V-formation poking out on either side directly below the frame. Fuel now comes from a modified tank, housed within the frame and with the filler cap poisoned further up. 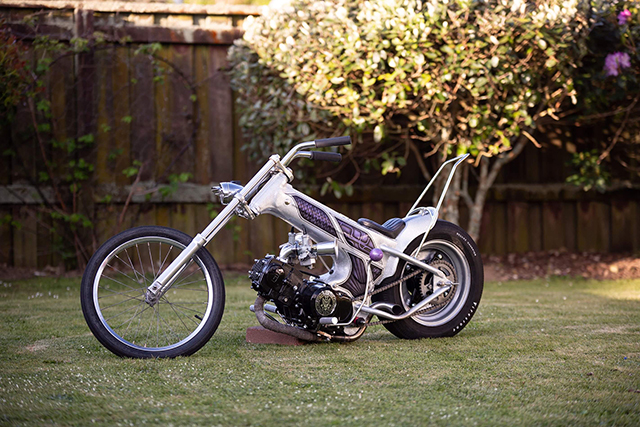 The chopped Dax’s three-speed transmission is now operated via a right-hand suicide/jockey shifter with a custom linkage running up from the power plant before being capped off with a pool-ball-style shift-knob. Equally involved is the little Honda’s cockpit and controls. A custom set of mini Breezer-esque bars are fixed to a custom top triple, with the entirety of the cabling and throttle assembly hidden away internally. And, in place of the stock foot controls are now a set of milled mid-forward control pegs. 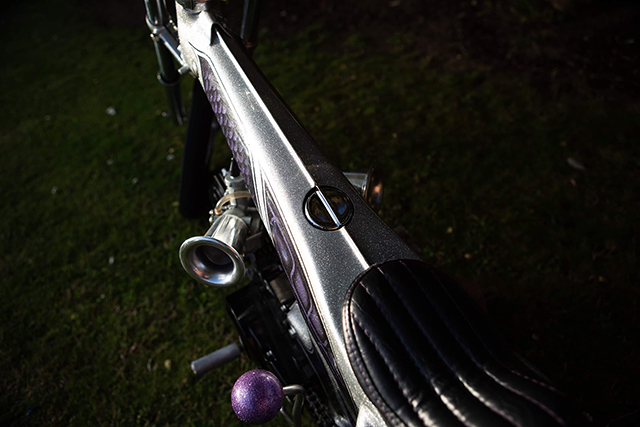 Rounding out the small-wheeled steed is a one-off exhaust, winding from the header, underneath the engine and exiting out just above the chain in between the hard-tail, and an elaborate, fish-scale-themed multi-color metal flake and air-brush paint job covering the bespoke frame and bodywork, as well as the shift-knob.

“The aim was to look like an old-school chopper and be as clean as possible. Everything on it was built to suit the look with a lot of time put into getting the correct proportions to make it look almost like a full-size bike when no one is on it,” relays Jeffs. 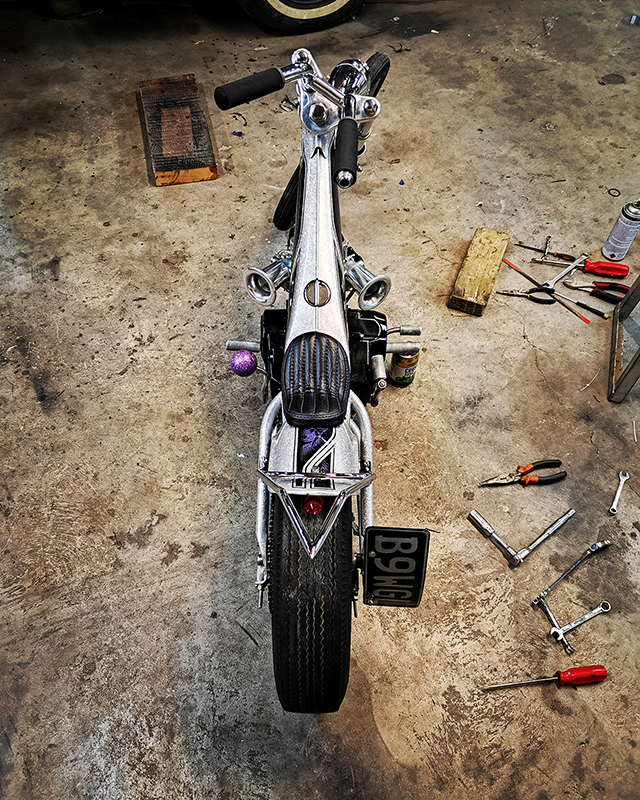 Overall, Jeffs and friends have done a remarkable job of transforming the Dax into a shockingly clean and well-polished one-off machine that stands squarely in the chopper-class, despite its pint-sized nature. And, the build is made all the more impressive considering that, unlike turning a Harley or Indian into a chopper, there’s little to no market for aftermarket Dax chopper components, meaning everything Jeffs laced the bike up with had to be dreamed up, designed, and fabricated from scratch. Love it or hate it, this is one small bike with a very big personality. 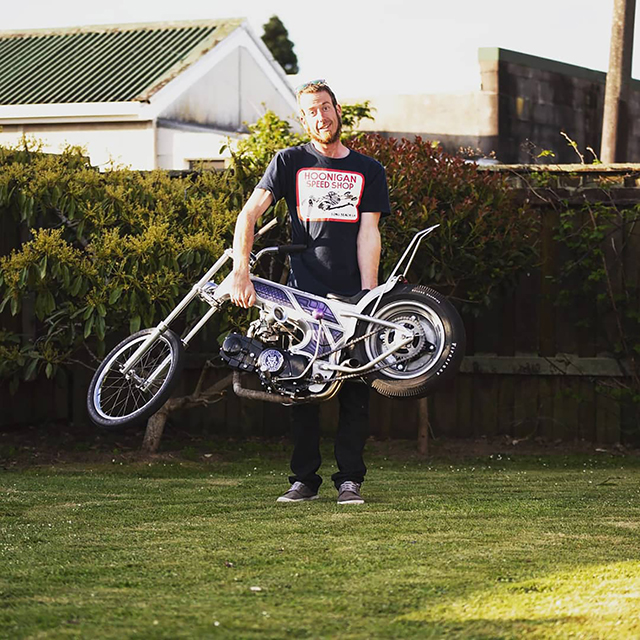