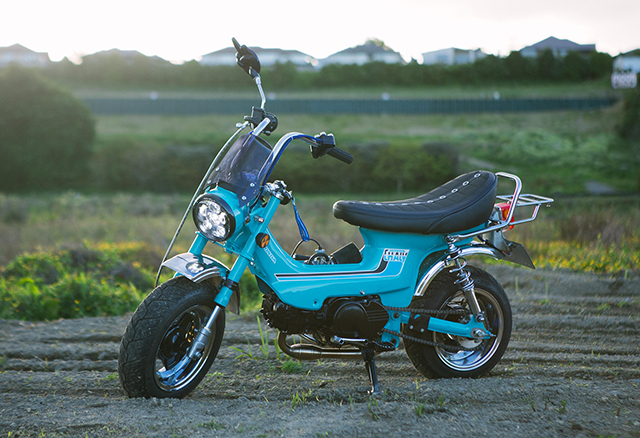 There is an idea in some motorcycle cultures, that having a bigger bike isn’t necessarily better. I can agree with this line of thought. I remember opening up the throttle in sixth gear on my Suzuki 250, leaning into a corner, feeling like a MotoGP racer and seeing that the bike was just nudging 95kmh. This culture of smaller is better is prevalent in South East Asia, where big capacity bikes are not an option, yet the desire to customise bikes is still strong. This part of the world is where our story begins, with Callum Blackmore discovering in Thailand exactly what he was looking for in a motorcycle. And so today we feature the fruit of his labour, his 1972 Honda Chaly Custom. 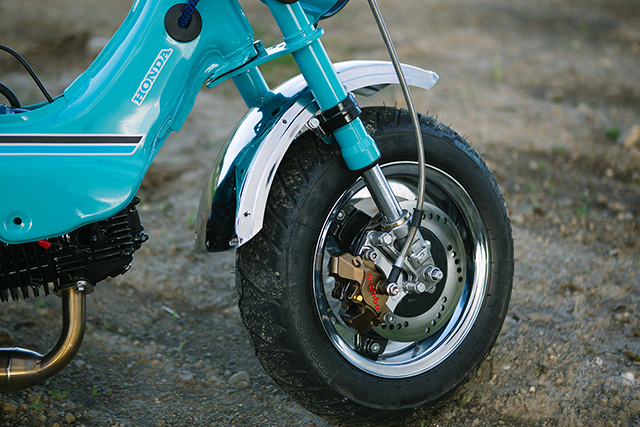 In 2014, Thailand was an interesting place to be. Callum Blackmore had been living in the country for a year, the military had taken control and Callum was forced to stay in the provinces while everything quietened down. It was during this time that he came across his first Chaly: ‘An old lady had it sitting outside her house; flat tyres, weathered, looking like it could do with some love. I plucked up the courage in my poor Thai language and asked if it was hers? She said yeah, ‘if you can make it work you can ride it around.’ And that is how it all began. 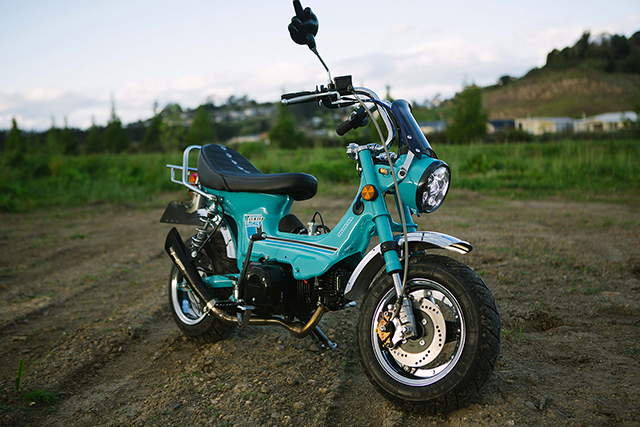 Moving back to New Zealand in 2015, Callum worked his way through a whole range of small capacity bikes, but it wasn’t until he had purchased another Chaly that he really felt like he was at home on a bike again. From stock commuter, to hacked up custom, and onto Ape Hanger, the Chaly went through a few guises until Callum stumbled onto the ‘CDM’ custom scene. Custom built Chaly, Dax and Monkey minibikes were being produced in workshops in Thailand and Japan, bikes the likes of which were nothing seen in the NZ custom scene. 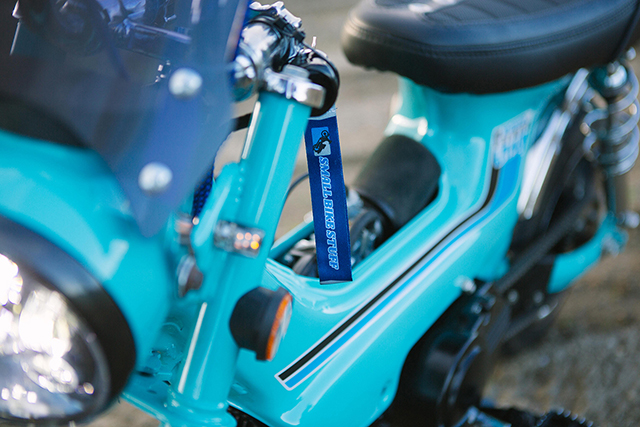 A trip to Kuala Lumpur in 2018 introduced Callum to Nuttawut Chaikapho, the man behind DKK Minibike. Working on a Chaly, Nuttawut had chopped almost 5cm out of the frame under the tank, and another similar amount from the down tube; when reattaching the front end he’d raked it back slightly. Using this build cue as inspiration, and bringing back a bag of parts from the CDM shop in Bangkok, in Callum’s words he had ‘sourced enough for the bones of a wicked build’. 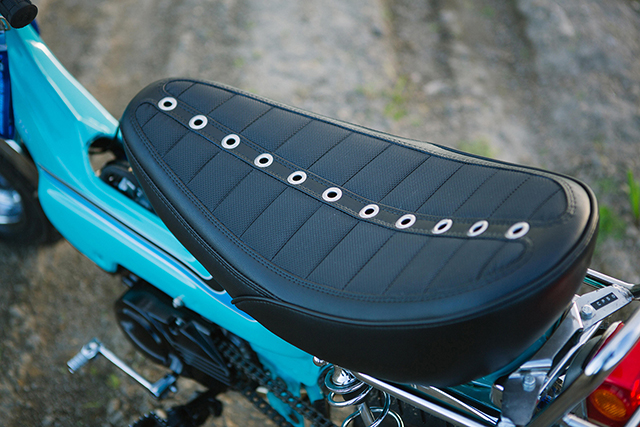 Aiming for functionality as well as form, the Chaly has been left at stock height, although not much else has been left as the factory fitted it. Dax style mud guards replace the original ones, a new rear rack has been fitted. A Honda CT110 headlight bucket has been mounted up, as it allows fitment a Harley-Davidson LED Daymaker headlight unit. The rear tail light has been modified to become an LED unit, with four tiny LED indicators added. 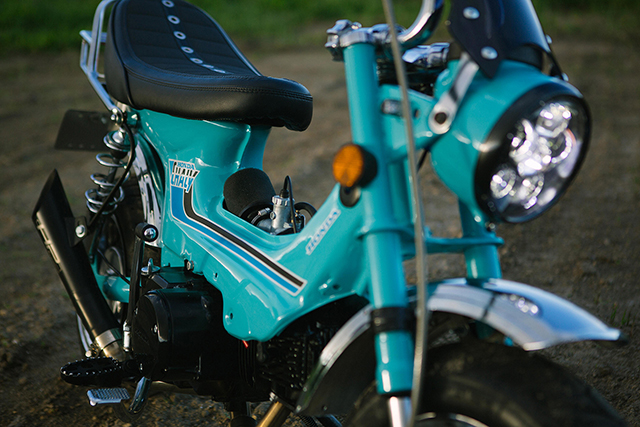 Callum wanted the bike to have everything, horn, killswitch, lights, but to keep with the bike itself the setup needed to be minimalist, with one single switchblock mounted on the left hand side of the handlebars. To help the little bike pull up, a disc brake conversion has been added to the front end, and the rear end is 6.1 inches wide, while still retaining the drum brake set up. 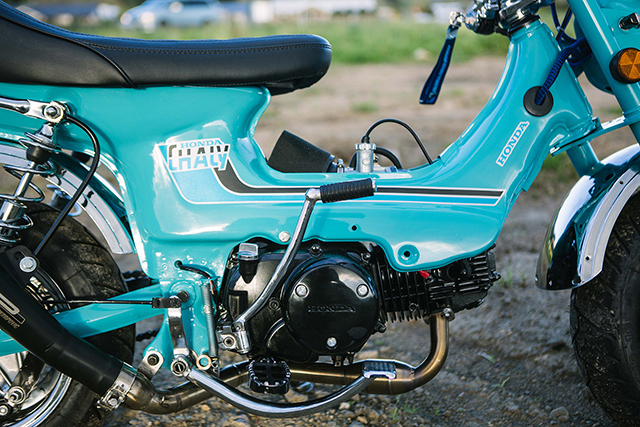 To give the bike a bit more poke, Callum decided on an engine refresh which turned into a four month section of the build. Forced to source parts from five different countries, the instructions on modifying these types of engines made it hard to get one solid source for what to do, so a lot of it was learning as he went along. The big bore kit ended up needing a crankshaft from Malaysia, the crankshaft needed a timing gear from Vietnam, the new clutch kit came from Thailand. Seeing as he was going to all this effort, Callum was able to talk himself into race prepped head, camshaft and big valve setup, ending up with a 118cc motor which is ‘fairly aggressive but not so powerful that it is un-rideable’. The front end lifts up easily, even with such a short wheelbase and the bike itself approaches triple digits in a rather spritely fashion.

Taking a pedestrian commuter bike, Callum Blackmore has taken experience and parts from all over South East Asia, to build a truly unique custom bike. A build like this shows that bigger isn’t always better, and that you can have a hell of an adventure even building a small bike like this one. 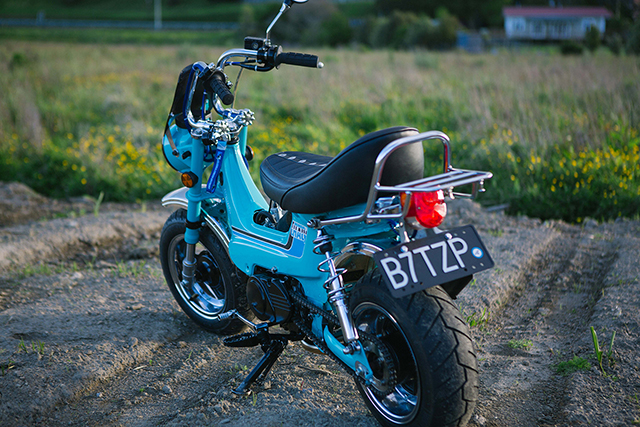 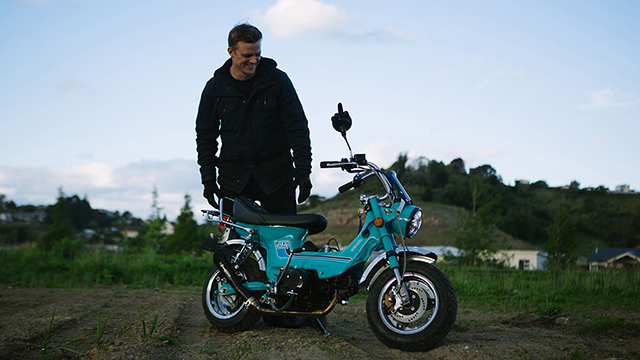 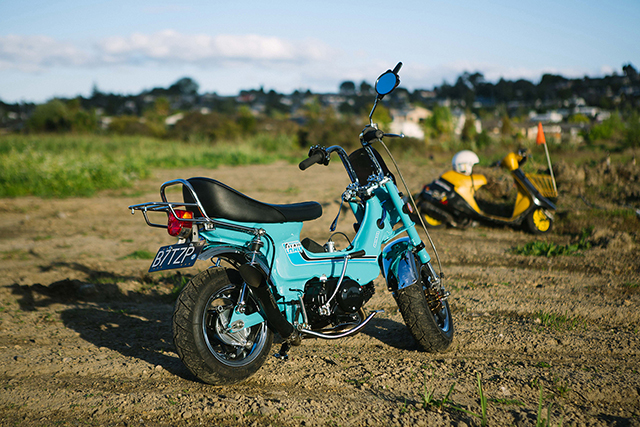 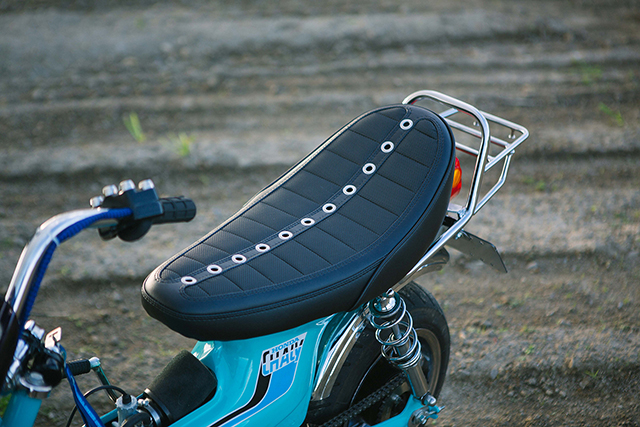 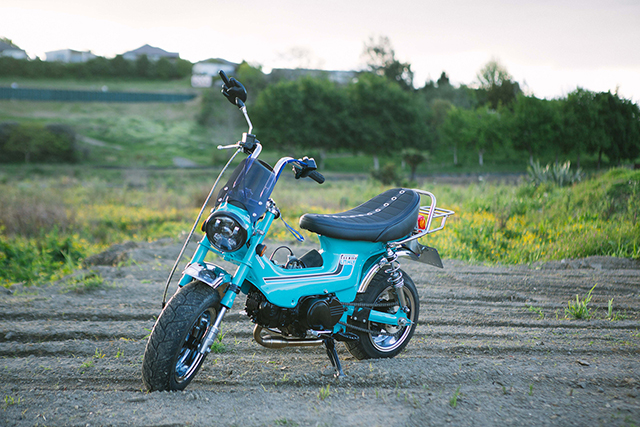 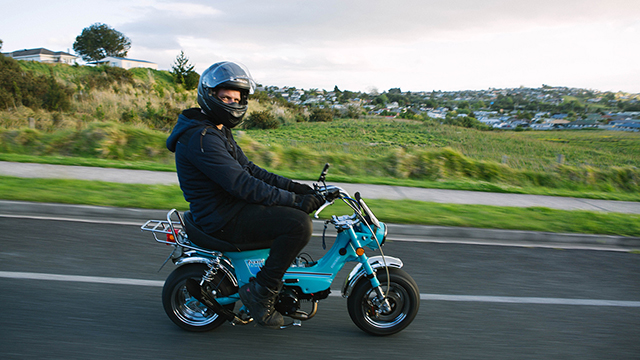 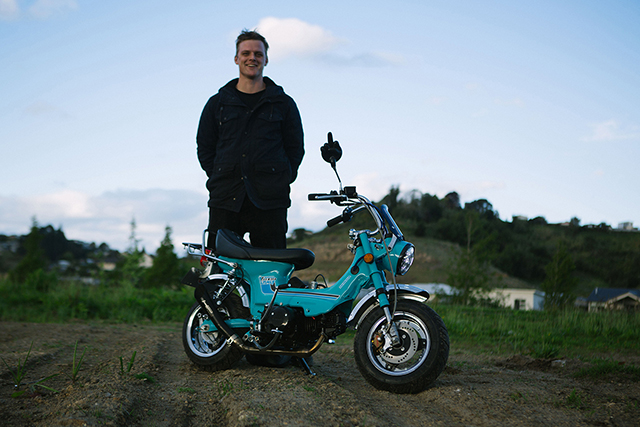