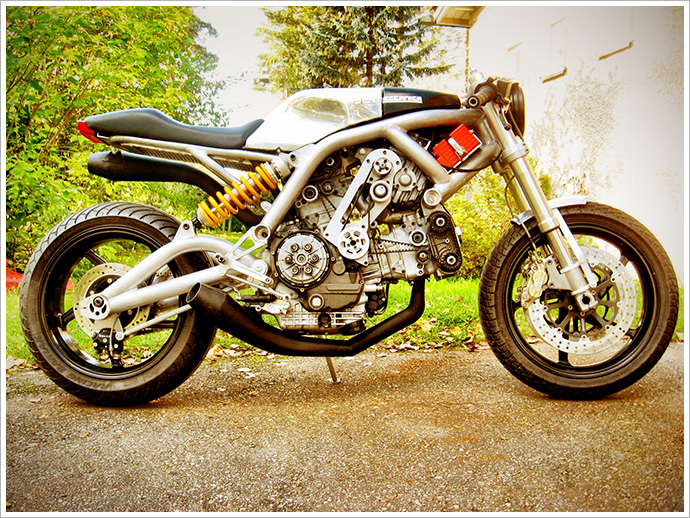 History is a wonderful thing. But don’t believe what the scholars tell you, the most interesting parts aren’t “the lessons from the ages that we must all keep in mind as mankind progresses.” And it’s not the politics or the relationships or the romances either. No way. It’s the really cool big shit. The catapults, the pyramids, the zepplins, the battleships with a thousand guns that can throw car-sized projectiles over the horizon. It’s the rockets that have 38 million horse powers to carry a car to the moon so that the guys inside can do low-G burnouts on another world. That’s the stuff that really matters – the stuff that they will remember in a thousand years. Janne Leiman knows this. That’s why his bikes are amongst our favourites. He’s not the sort of guy that fluffs about with clever colour schemes and faux-aged finishes; he’s the sort of guy who looks at a bike and thinks “what’s the biggest, coolest, most insane mod I could possibly do? I know – how about an enormous, face-melting supercharger to give it enough giddy-up to melt diamonds on a distant planet and make all the Pharaohs simultaneously rise from their graves and give us a very dusty, skeletal ‘sign of the horns’ with both hands.” Love your work, Janne. Love. Your. Work.

“Hello again, Pipeburn. This is my latest bike. The engine is from Ducati 996, mostly stock inside. Those bikes are injected, like all 8-valve Ducs, so no separate ignition. Which was problem, because I want to use carb. Fortunately there is mounting points already machined in engine block for pick-up plate. Only other part needed to swap is flywheel from carb model, Monster this time, if I remember right. Ignitech box and Fireblade pencil coils finish this job.” “Supercharger is Ogura TX12, mounted on intake plenum, which I made by casting three seperate pieces from aluminium, and then weld it together. Welds was grind down for smoother look. Mounting parts are machined from plate, except upper one to attach rear head, it is casting, too. Carb is DellOrto DHLA45, gas supplied for it by electric fuel pump and tank mounted regulator.” “Rims are left-overs from our racing efforts,
and rubbers too”

“Frame I made from 50 mm diameter 6082 aluminium tube. 7020 aluminium is probably better suited, but very difficult to buy in smaller quantity. Swingarm is same material, and it mounts only back of cranckcase, like older Ducatis. Rear frame, made from 25mm tube, houses radiator. Bottom of tank and seat is shaped like tunnel, I hope this will guide airflow to radiator. Rear shock came from Paso, but its made by Öhlins. Front end is from another Ducati, Super Sport this time, and made by another fine suspension company, Showa. Rims are left-overs from our racing efforts, and rubbers too, old rain tyres. Brembo calipers and master cylinders, Braking discs and so on.” Such a big space between those two pistons – if only there was something we could put in there to make it go faster…
“Fuel tank I hammer from soft aluminium plate, front part (black one) is air box, and it is laminated from carbon/fiberglass matt. Under that cover is also most of electrical parts, besides battery, which you can see behind head stock. I also made seat upholstery, but this job I should left for professional.” Nice stuff, huh? Must be an amazing ride. Can’t help but ponder in our little, fume-addled minds what he’s going to do next, though. Whatever it is Janne, please promise us you’ll steer clear of rockets. And explosives. Ok?