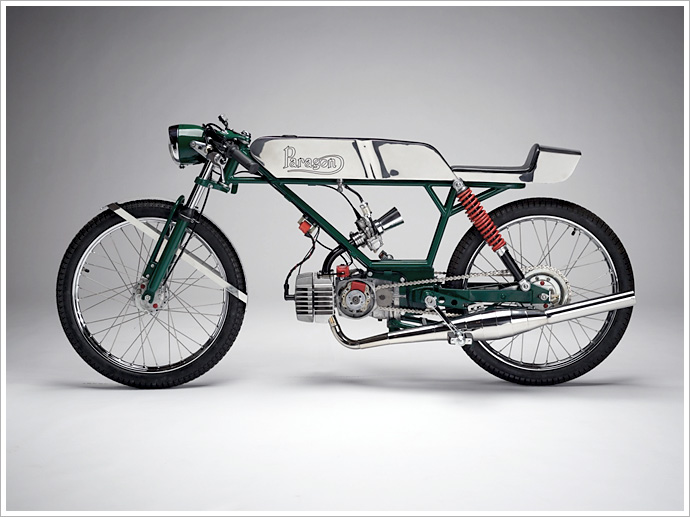 Over the years, I have thought long and hard about the difference between mopeds and motorcycles. There’s the technical considerations regarding pedals et al – the whole “motor with pedals” thing that seems to be the most obvious seperator. Then there’s the licensing thing and the fact that in many countries you can jump on a moped with minimal intervention from “the man.” There’s also the lack of a cross-bar frame and the extreme economy of the typically minute moped engines that split the pack, too. But you know what I keep coming back to as the overarching difference that really defines the two? The sure-fire way to explain the difference to a laymen without risking any sort of misconbobulation down the track? It’s the fact that mopeds are just so beautifully svelte. Trawl back through the Pipeburn archives and you’ll notice that pretty much ever ‘ped we’ve ever posted has the most sublime minimalism – it’s enough to take your breath away. But you ain’t seen nothing yet – at least until you lay your eyes on our new model of minimal excellence, and pretty much the nicest ‘ped we’ve ever seen, The Paragon Puch from Janus Motorcycles. Here’s the very slender Richard from Janus. “My friend Devin Biek who owns Motion Left Mopeds, crafters of expansion chambers and other mysterious moped performance parts galore, had been dreaming of a completely custom moped frame for several years. We had worked together on a number of custom mopeds, and, like a lot of other moped builders, loved many of the top tank models. We have a very special place in our hearts for 60’s and 70’s 50cc GP bikes and had been tossing around some ideas for what our version of a Puch-engined racer would look like.” “Since we were building it from scratch, scale was a big issue; making sure the seat was at the right height, and the distance from seat to triple tree, etc – things you normally don’t have to worry about in the custom world. So the Paragon really transformed from something we decided to do on a whim into a sort of first prototype for what became our small displacement motorcycle company, Janus Motorcycles.” “It taught us a lot – like how expensive engineering a pedal shaft really is. We’re so proud we retained the pedals and did it right on this first bike. It took us longer than it should have to build it: about 3 months to design in our free time (I was supposed to be doing my Master’s thesis), and another 8 months to gather the necessary parts and assemble it.” “The frame, tank, seat, swing arm and fenders are all built in-house. The rims are 19″ items we ordered from France mated to standard Puch hubs with custom stainless spokes. The engine is a heavily modified Puch E50 with a Gilardoni 74cc cylinder, CDI, and lightened and braced clutches. We’re running a 24mm flatslide Mikuni with custom intake and velocity stack with a polished stainless steel MLM BK100 expansion chamber. All the aluminum work is hand-formed 14ga aluminum. It’s a blast to ride and really hauls.”

Here’s a little video Rich and Devin threw togther as a means to promote Janus. We believe that’s Devin on the bike, and Richard in the workshop…