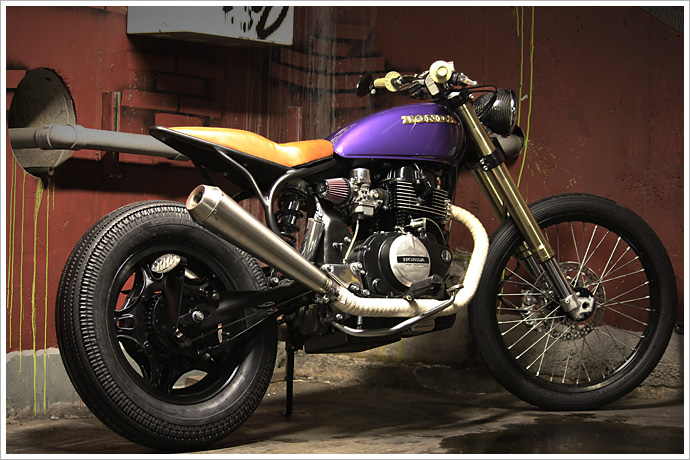 Decisions, decisions. What colour should I make the tank? Or should the tank be bare metal? How do you coat bare metal so it doesn’t rust? What tires should I choose? Should I choose the same front and back tires or should they be different? How low should it be? If I lower it, will it change the handling? What rims should I use? Should I keep the standard headlight? Do I use pipewrap or not? Do I need fenders? Will the bike attract the cops? Should it be clean or ratty? Will it look weird or will it look cool? Customising a bike involves so many questions. All of them seem insurmountable, yet you somehow know that what makes a great bike is just the final sum of all these tiny little decisions. Hold back on them and you’ll get a bike that blends into the background like a turd at a chocolate festival. Go overboard and you’ll spend your weekends ignoring the chuckles and the rolled eyeballs as you arrive at your local hang. But get it right… “Hello, my name is Josh Mott. I’m 22 years old and owner of JMR Customs in Boise, Idaho. I’m a 3rd generation mechanic, racer, and bike builder. I’ve been racing for 10 years in many disciplines such as: flat track, arenacross, endurocross, and desert racing. Currently I’m in the National Hare & Hound series. “This 1982 CB 450 Honda Nighthawk was originally picked up to part out and sell on eBay. It was roached beyond belief. It had bent forks, a wiring harness that was stripped, and a missing fuel tank. Out of curiosity I thought I’d check the compression and spark to see if it had some sort of working order. It had 175 psi in both cylinders and had spark. I decided to clean the carbs and it fired right up.

I had an idea that I wanted to put a motocross front end, lowered down, on a café style build. I had a 2006 YZ250 Yamaha front end sitting at the shop waiting for a project at the time, it was perfect. I ended up lowering the forks 7 inches to get the right height. As I finished this portion of the build, I then had the idea to mount a mono shock. I used a 2005 TT-R 250 Yamaha shock because it fit really well in the small space I had to work with.” “The fabrication work included many modifications. I cut the whole back half of the frame clean off to begin the custom portion. I had the older Champion flat track frames in mind where the frame was exposed right below the rear fender. I wanted the seat portion to sit within the frame.

The overall bike length looked shorter than I preferred so I cut the frame by the headset and raked it from the stock 28 degrees to a custom 34 degrees. I center mounted the fuel tank which involved cutting the top of the tank out. While I had the top of the tank out, I mounted a sleek, flush mount gas cap. Custom exhaust pipes were made to fit some after market Ducati mufflers I had, making the bike sound like an older Triumph. The wiring harness was custom made before I installed the motor. I have a key switch flush mounted on the right side of the frame and a start button on the left. There’s a little switch dashboard mounted under the coil and tank. There’s a high/low beam and a switch that turns on all the lights. I made a box that’s mounted underneath the motor – it holds the battery, starter solenoid, fuse box, and regulator rectifier.” Down on their luck, the Teenage Mutant Ninja Turtles considered stealing the bike for drug money

“I pulled the motor all the way down to replace the cam chain, rings and gaskets. While I was in there I cleaned up the intake and exhaust ports in the head. A Magura hydraulic clutch for a KX 450 was installed to replace the stock component. For a speedometer, I used a Trail Tech Vapor and made a mount that was clean to hide all the wires.