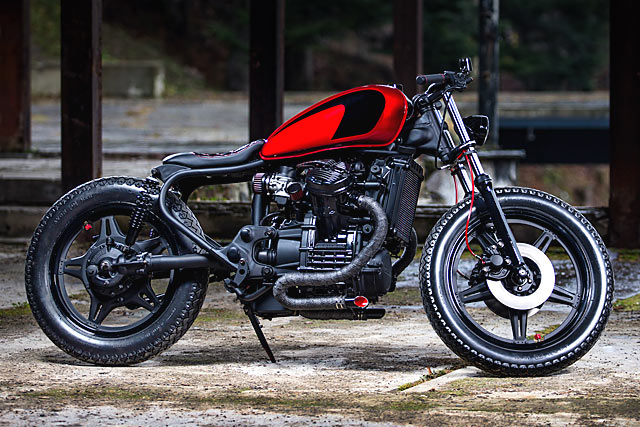 In nature, coloured codes are pretty common. It’s how the planet’s livings thing communicate. Whether you’re trying to attract a mate, protect yourself or spread your DNA, it’s the colours you utilise that will mean the difference between success and failure. And there’s no prizes for guessing that when it comes to things that are red and black all over, it can only mean one thing. Danger. So be it bravery or just complete stupidity, we’ve ventured forth to bring you the story of today’s build, the ‘Just’ Honda Cx500 from Poland’s MichuMoto. “My name is Michal, and MichuMoto is the name I’ve given my own private garage,” says the shop’s owner. “But when I say ‘garage’, it’s more like a small box in the garden. Still, it’s home. I’m a 39-year-old guy with many year’s experience as a motor biker. A few years ago I started to build a custom bike, but it was never finished because of some family matters. Then one year ago, a Honda CX500 came in to my little garage and finally work started.”

The original concept was to build motorbike without any unnecessary parts and to hide all the wiring to keep it as clean and simple as possible. The colours were chosen at the beginning of the project by Michael, so him and his girlfriend just stuck to them. Also, the bike should be for her, but since pondering its fate it seems Michael has developed a sudden case of the ‘mines’. “What we also planned was to have a single seat, the same tyres front and back, and a bike that was made by hand not by a CNC machine. What we did do was to produce as may of the parts as we can using our grinder, lathe and welder.” As Mike’s working full-time outside the bike industry, all the work had to be been done on the evenings and weekends. Put simply, the guy’s very dedicated. “I didn’t realise how much work would need to be put into the project. It was started year ago and the plan was to finish it within the year. In the end, the bike was completed in a total of 13 months, so it wasn’t such a big delay after all.”

“I bought the tank from a Yamaha SR500 which was cut in half to make it wider. Also, the tap has been moved to the centre and a speedo was placed at the front. It was easily the most difficult part to made. It took almost 3 months from start to finish.” “A big challenge was to hide the throttle line inside the handle bar. Because of that, we fabricated a mechanism which is hidden under leather grip. Then, all the bike’s bolts were anodised in black. Our goal wasn’t to buy as many expensive parts as we could and fit them to the project. Instead, our goal was to produce as much as we could ourselves.” The parts that were fabricated by MichuMoto include the bicycle-style ‘bars, a tank based on a SR500 style, top and bottom clamps, foot pegs, rear sets, the brake pedal, the gear lever, a battery box and an ingenious internal gas throttle mechanism. Other parts include some HEL brake lines in two colours, a headlight, tyres, a few smaller parts from Wwag in Germany,  some front indicators from FrenchMonkeys, some bespoke Hagon Shocks from the UK, and a seat and some grips from Lucky. “The bike was mostly inspired by the amazing CX500 by Kingston Customs; it has a very nice shape and it’s really not your typical cafe racer. The bike’s handlebars were inspired by old Russian bicycle called the ‘Ukrain”. Overall, I was trying to find parts for the project which were minimalistic, but that had a bit retro look. I was trying to keep the motorbike as symmetrical as possible.”

So in the end, Mike probably wouldn’t say that it was a single master stroke of inspiration that created look of the bike; it was more about sticking to the points which defined his final look. Less of everything. Pleasing symmetry. And lots of black. “What I like most about the finished bike is its simplicity. It’s got a really clean look. A phrase I hear quite a lot since finishing it is, ‘I don’t know much about motorbikes, but I’d really like to have one like this”. We think we get their drift. “It is very difficult to say which part of the bike I like the most, but I’d probably say it’s the handlebar that includes a handmade internal throttle mechanism and stitched leather grips.” “I didn’t have many chances to ride this bike, as it is winter in Poland. But riding ‘Just’ for me is a completely different experience, probably because this is my first 100% solo project. No, it’s not a high speed beast. You’ll enjoy every single minute of riding it and you feel totally happy. A big smile is on my face all the time. It has everything that’s needed and nothing more. Riding is a pleasure not a stressful experience at all. And the custom bar’s width gives you the impression that you’re riding some motorbike from 1940.” Sounds like an entirely good thing to us, then.