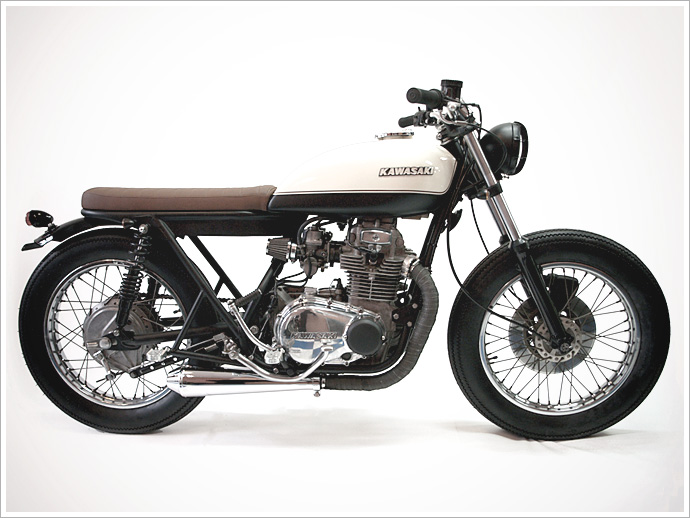 Although we’re about as religious as Karl Marx around this here blog, we thought that for Easter we’d like to show you bike from a country that would understand the irony of celebrating the religious holiday about resurrection with a rebirth of a slight different kind. Here’s the latest build from Barcelona’s Free Kustom Cycles, a bunch of guys who obviously know a trick or two about bringing things back to life. It’s it a miracle? Probably not, but by gosh it sure is pretty. Here’s Marcos, head honcho at FKC. “The story began a few months ago when the bike’s owner, Joao, came to me to make him the bike he had always dreamed of riding. He was very clear as to what he wanted the bike to be; he told me that his bike must be a bike with a classical essence.” “I started by tearing down the bike to strip all the pieces, re-assembling it roughly and then modify the parts necessary to give the appearance that Joao was looking for. The next step was to cut the rear subframe to do a new round rear hoop. The engine has received ​​a facelift (the internals were clean) and then we polished all the covers. I cleaned the carburetors and an air filters were installed with chrome highlights, then we rejetted to make sure the carburation was making full advantage of the engine.” “All the electric parts, including the battery, are now under the seat in small box that we made; under it is the ignition key and the starter switch. This work was the most difficult, because I had to simplify all the electrical wiring to put it inside. The other parts that I changed were the original tires for a Firestone Deluxe 4.00x18s, the handlebars and a new front brake line by Goodridge.” “Then we added a speedometer with all the indicator and warning lights on a support made by us too. The grips are Biltwell kung-fu grips. We also added the turn signals, a new/old headlight and a new taillight, the new footpegs, and I adapted a new aluminum rear fender, too.” “As for the exhaust pipes, we adapted two megaton baffles with exhaust wrap and made some new brackets to hold one on each side of the bike. The paint job is classic and simple, just as Joao wanted, and was done by our bro Kilian Ramirez of Pic-Astudio – he did the pics, too.”