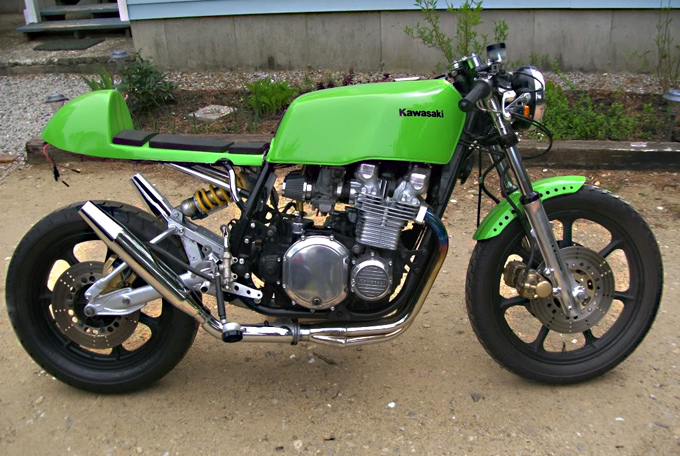 After yesterday’s ‘Mad Kwak’ article I thought it was appropriate to feature this monoshock Kawasaki green KZ1000 café racer which was recently a finalist on Do the Ton for ‘Bike of the Month’. Built by ‘backyard builder’ Andrew Lakowicz who told us “the bike was actually given to me by a relative, it had about 60,000 miles on it and was in a very rough shape”. Andrew did everything on this bike himself, including all the welding which he learned during the process. He is far from finished though, and already has a list of changes for his bespoke creation. “I actually just finished taking the swingarm off, as I am going to redo it. I am not too happy with the way it looks. My first stab at it was really an exercise in design and function, now I want to make it look more aesthetically pleasing”. The bike is well documented in it’s many stages, with numerous build threads (one, two, three, four, five, and six) on Do The Ton, showing how Andrew transformed this vintage bike into a beautiful monoshock café racer.