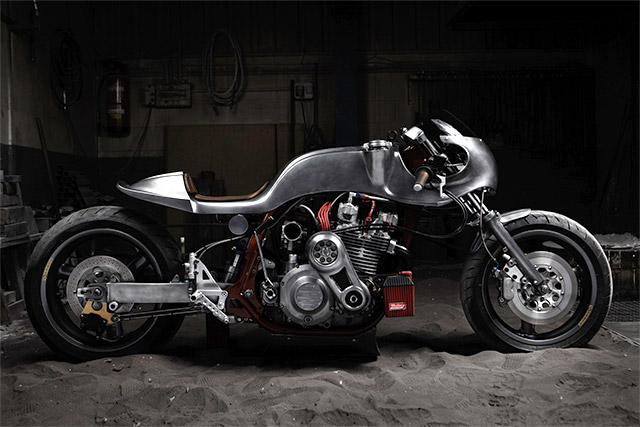 You’ve got to hand it to the Spanish. They are nothing if not risk takers. While America, Australia and England get their jollies from innocuous bat and ball sports, the Spanish get theirs taunting angry bulls. Now, I think it’s fair to say that the number of combined casualties for soccer, cricket and baseball players over the past few hundred years or so would be pretty much zero. Sure, there’s the cricket players that died of boredom and the soccer players that were just pretending to be dead, but overall they’re negligible. But compare that to bullfighting’s 533 deaths in the last 300 years. Serious stuff, but probably what you should expect if you jump into a ring with a beast like that. Or like this. Wave your red capes in honour of the nastiest, most powerful bull that’s ever lived, ‘La Bestia’ from Madrid’s Valtoron. The Valtoron boys set out with the notion of building something that paid homage to the both classic drag bikes and those you’d see tearing across the salt flats at Bonneville while hunting for a land speed record to two. The name, as you can imagine, was pretty much the only choice for a 230hp, big bore, turbo drag bike. Except maybe ‘Diablo’. The engine is about as subtle and a flaming sledgehammer to the teeth; there’s a Kawasaki Kz1000 with a Rajay F40 turbo force feeding it, a Kwaka big block 1327cc cylinder head and various MTC engineering components including their big bore piston kit, crank, cams and clutch. This was topped off with a special transmission, replete with an air shifter system. Something tells us these boys weren’t doing thing by halves. On top of the fully modified frame sits a bespoke monocoque body, made in a single part from the tip of the fairing to the final, duck-tailed cowl piece. As the boys put it in their own, Madridian way, “Is the most time-spending part of the bike and obviously the most difficult part of the bike too.” We hear you. The obvious, nay vicious rake on the forks was included as a means of increasing the beast’s wheelbase. Not only did this provide Valtoron with the stance they were after, but it also dramatically decreased the likelihood of wheelies, which is something that’s more than a little likely when you have 230 ponies on tap through your right wrist. The forks came off of a Yamaha FZR 600 and were shortened to suite. While a much more sophisticated front end could have been sourced, these ones were fitted because they filled the brief of being light, simple and reliable while being about to handle a lick of speed, too.

The final touches on the bike were added using some rather elegant sand-cast pieces, including the turbo’s exhaust gate cover and the bike’s Mallory ignition belt guard. The parts were first fashioned in clay, and then used to make sand moulds into which the molten aluminium was gravity fed. We not only applaud the lads for trying such a different approach to their parts fabrication, but we also think that they are the beautiful focal points that really take the bike from good to great visually. And we love the typography, too. If you, like us, are finding yourselves suddenly interested in bullfighting (especially the internal combustion variety), the you’ll be pleased to learn that Valtoron were kind enough to send us a muy español video featuring the bike which you can see here. Ole!