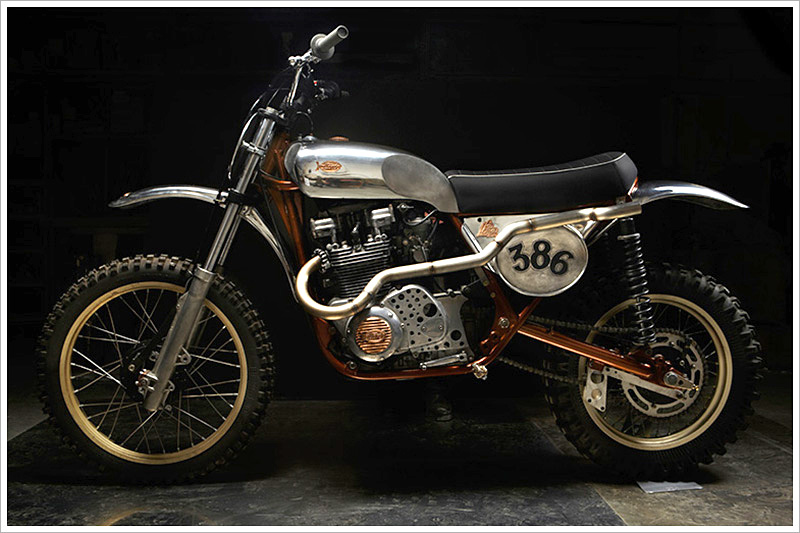 Passion. The Spanish are known for their passion; in life, in love and most importantly for us, in their custom motorcycle builds. The lines of a vintage MX bike, massaged into existence with a Mediterranean flavour make for one hell of a beautiful ride. This unique custom rolled out of the Spanish workshop Valtoron, named ‘La Loma 750’ it’s a reworked Kawasaki KZ750 stripped of the majority of it’s factory componentry. In its place you’ll find a stripped back dirt chewing machine, with go to match the show. And what a show it is. Taking the standard Kwaka, the Valtoron crew stripped the bike back to its bare frame and ditched the factory swing arm. The frame was modified and strengthened to give the bike a better chance at surviving the rigours of off-road riding. Sitting in place of the stock swing arm is a Suzuki GS1000 unit, stripped of anything superfluous to cut down on weight. A pair of old school MX coil springs flank the rear guard, adding to the dirt ability of the machine. The ride at the front end of the Kwaka is thanks to a set of 41mm Husqvarna WR250 forks, with a stock SR250 brake setup mounted to it. Atop the forks sit a pair of handlebars donated by a Bultaco Pursang MK8, adding to the bike’s Spanish styling. At the rear the brakes have been fashioned from Husqvarna components, both front and rear rims are also Husqvarna sourced spoked items. The body work on the bike is 100% Valtoron, leaving their stamp quite literally on some of the custom metalwork. With the original bodywork stripped from the Kawasaki, new panels were fashioned up in the Valtoron workshop. A new guard was manufactured using cast aluminium, a new seat used to fit with the concept of the build. Most importantly, a fuel tank was built from scratch to suit the lines of the bike and to give that off-road feeling the Valtoron boys were aiming for. The foot pegs are KTM items, to give the foot grip you need for control on the dirt. With no need for an exhaust system that sits low, a new scrambler type system was produced. A single pipe from each cylinder, running up either side of the bike and finishing flush with the rear coil springs. The transformed road bike is running sans silencers as well, to give that full on MX noise. The factory round engine plates have been ditched, in their place sit custom Valtoron plates, showing the ability of the bike building brothers. The engine cover plates have been given the drill treatment, to add to the look of lightness in the build. Sitting proud on knobby tires, the bike definitely has captured the look of wanting a dirt trail to explore, while looking pretty enough to catch attention while on the way there. With Spanish flair and the ability to craft the majority of components themselves, the brothers Valtoron have come up with another amazing build to add to their CV. From a rather pedestrian road bike something beautiful has been created, that is still able to be ridden. And ridden hard. You can be surprised with what passion can create.