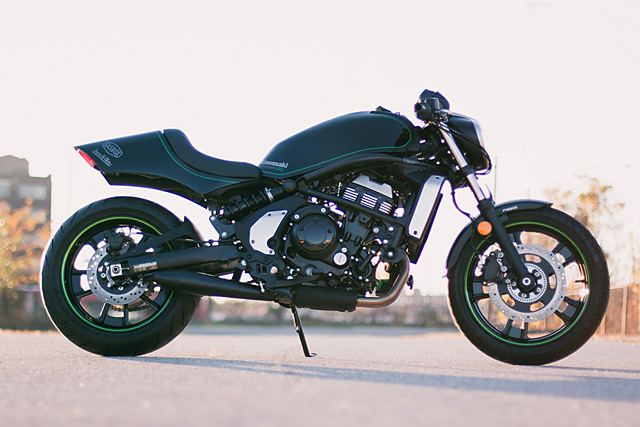 There was a time when the big manufacturers didn’t wish to be at all associated with the custom scene. Racing? Definitely! But smartarse grease monkeys? No thanks. But so big has the revival of the custom scene become, that global corporations are now turning to the very group they once shunned to lead the marketing of their new models. For Kawasaki, it comes in the form of their Breaking Boundaries Build-Off that tasked four fantastic builders with the challenge of doing something truly unique with their newest Kawasaki Vulcan S model. The manufacturer tapped Steve Howell with Iron & Air Magazine on the shoulder and they called in one of the industries best builders to spin the spanners; none other than Jesse Bassett from Ohio’s The GasBox. Before Jesse could get building the two companies put their heads together to come up with a design; Scrambler or maybe a full on race bike, no, adventure bike with hard bags, not really. They just weren’t feeling it, but after enough time thrashing the Vulcan around they finally fell in love with that typical Kawasaki trait, the thing will just do it all. So rather than opt for a particular style this bike is a nod to the golden days of Team Green’s Supersport era, think Eddie Lawson, the GPz and the brilliant Z1. With that the design for what would be known as the Vulcan SS was born and Jesse could get to work on creating a custom build that still maintained the essence of the Vulcan and Kawasaki but in a re-imagining of true “take me back to my roots” style. The standard sheet metal is gone, this is not something you see too often in manufacturer based commission builds but Jesse has more than enough skill to pull it off. The tank is a brilliant piece of execution, even with the constraints of an airbox and perimeter frame Jesse has crafted a tank that flows as beautifully as anything from the period of inspiration. The tail section and seat too are also entirely built by hand, the rear piece devoid of the generic cruiser lines and instead brings elements of both race and cafe styling to totally alter the look of the bike. But even with such a dramatic change Jesse managed to integrate the factory tail light, albeit upside down. The flawless black paint work gives the Vulcan SS a tough look but the subtle use of Kawasaki Green replicated on the wheels is the sort of touch that let’s you know just which of the big Japanese companies is behind this bike. Jesse also managed to cleverly retain the stock headlight and with the premium custom seat the visuals are spot on. One of the features Kawasaki will be hoping attracts new riders is the ultra low 705mm seat height that means even the shortest of riders will be able to plant both feet on the ground. But it gives the Vulcan a very cruiser like stance and wasn’t anywhere near aggressive enough for the crew so Jesse modified the Offset laydown single shock linkage which raises the machine a good 5 inches. With its bum up in the air and the 41mm telescopic factory forks still in place the result is instantly more cafe racer and proves how one clever modification can drastically alter an entire motorcycle. The factory brakes are more than adequate with a single 300mm front disc with twin piston caliper doing the majority of the work and the addition of ABS providing an extra level of assurance for riders of all skills. With the stance of the bike now cafe over cruiser it made perfect design sense to seat the rider as you would expect from such a transformation, only this Vulcan does that with an extra shot of attitude. The high styled cruiser bars that are fitted from the factory have been ditched, but rather than go with clip-ons that would have been fairly impractical or simply fit tracker bars the choice was made to fit a set of aggressive drag bars. The result is a similar hand position to the sportier Kawasaki Ninja 650R but with the muscular look of a Walz like Pro Street Chopper. To complement the new layout the forward controls were relocated on custom mounts towards the back of the bike and are now more racer rearset than lazy cruiser. It’s these changes that didn’t “have” to be made but were, that make all the difference in both the form and function of this truly custom ride. The heart of the Vulcan is the very Kawasaki parallel twin that shares a lot in common with the engine they’ve developed for decades and used in their lower level sportsbikes. The advantage of the 649cc engine are many, water cooling and years of refinement deliver the sort of reliability you just can’t get from an all new engine, there is no frame shaking vibration like the V-Twins fitted to many cruisers and its sporty DNA gives great throttle response across the rev range with peak power at 7900rpm and peak torque at 3800rpm, that is a serious spread.

With a restrictive stock rear box in place to meet the ever-growing emissions and noise requirements Jesse decided a change was needed. Releasing some extra ponies from the Kawasaki donk and drastically improving the sound is a matte black reverse cone muffler he adapted to fit the standard exhaust. The wheels are one of the most impressive sets of rims you’re likely to see on a reasonably priced machine; the dual 5 spoke rims are cast and measure 18inches at the front and 17inches at the rear. The design while clearly cruiser orientated will work with most stylings but to suit their look GasBox fitted up a set of sticky Metzeler M7’s for confidence inspiring grip in all conditions.

The end result is nothing like the factory Vulcan S model while still retaining all the best features that Kawasaki have brought to the market. This is what smart motorcycling building is all about, adding form and function where it is needed and maintaining the things millions in R&D have shown to be spot on, it’s why Jesse Bassett’s work on the Vulcan SS project is so damn good.