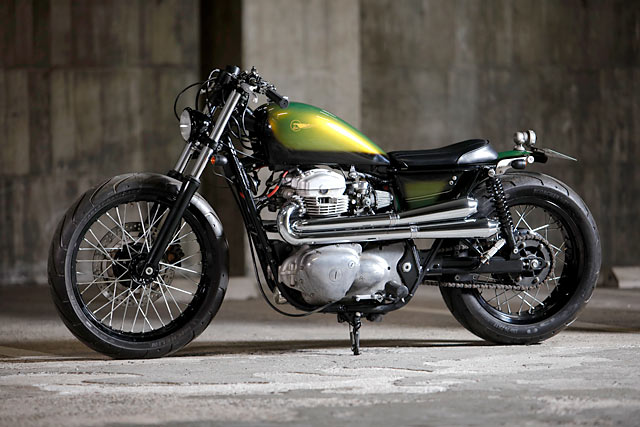 In an industrial area near the wharves, on a white weather beaten wall, is an old Castrol sign that looks like it marks the spot of an old English workshop. Step inside and the ’60s Triumphs and girder forks leaning up against a Pre War drill press only seem to confirm the earlier suspicions. But Newcastle upon Tyne this is not, welcome to Hiroshima and the now world famous workshop of custom builder extraordinaire Kengo Kimura. His Heiwa Motorcycles are instantly recognisable for their classic Japanese aesthetic and relentless pursuit of perfection. From an incredible portfolio comes his latest Kawasaki W650 build, his tenth, and this piece of bobbed motorcycle Nirvana is arguably his best. A brief glimpse of a Kimura-san custom and any half serious motorcycle aficionado knows exactly who built it. But Heiwa Motorcycles are not outrageous, there is no signature colour scheme or gigantic logo to give it away. In fact there is a simple beauty that would have the newcomer thinking they could copy the look. And you better believe that many have tried and all have failed. These are machines that are built with the hands of a man who has laid them on hundreds of bikes, who has earned his reputation in the tough judging eyes of the Japanese show circuit and who approaches his craft like each move will determine his next breath.

The Kawasaki W650 is the perfect donor for Kengo to go to work on, the vintage styling and classic parallel twin engine’s looks giving a very British vibe to this trusty modern machine. This 2005 model was commissioned by one lucky customer from the beautiful Shimane prefecture. A relatively sparsely populated area of the countries main island of Honshu; the build called for a bike that could eat up the winding roads while still looking as good as anything Heiwa makes. To start the build Kengo stripped the 650 down and began creating the perfect stance, “The first thing I started was working with the suspension.” The rear gets a drop closer to the ground with a set of progressive rate coil over shocks, while modified internals in the front forks are designed to match. The stock 18in rear wheel with a 130 section tyre is replaced by a 17″ Excel aluminium rim laced to the stock hub. Both tyres are Michelin Scorcher 11s, wider than stock, with a 120/19 squeezed on the front and a meaty 150/17 out back. But the purpose of creating a low and level bobber was not just to improve the handling, but to be part of the visual elements of the bike too. “It was a conscious decision to make the bike’s keyline straight, extending from the handlebars, under the tank to the seat rail,” explains Kengo. The continuous parallel line from front to back a more deliberate feature of this build than any other W he’s crafted to date. This meant cutting off the rear section of the frame that features the kick up and straightening the seat rail perfectly flat from the rear of the tank to the shock mounts.

Now the master could begin the metal work and mixing form and function is all in a day’s work for Kimura-san. “Although it is an engine with an old-fashioned design, it’s reliable. This is a bike that can really ride. Therefore, we made the tank slightly larger,” he notes. “The extra fuel capacity means more time in the saddle and who would ever want to get off such an incredible bike. The tanks lines have a Sportster appeal and flow seamlessly back to the centre-post.

[superquote]“Although it is an engine with an old-fashioned design, it’s reliable. This is a bike that can really ride.”[/superquote] The rest of the Kawasaki’s body work is kept very simple, to do nothing but accentuate the already beautiful lines. The hand rolled rear fender extending rearward just enough to catch the worst of the spray with Heiwa’s own strut supports giving it a floating look. The side covers fit neatly into the recesses of the frame and conceal the vast bulk of the wiring for an ultra clean finish. Then it was time for paint with the stunning shades of citrus gently transforming into black on the lower half of the tins. But the visual aspect of the bobber that gave Kengo the hardest time was on the mechanical side, “At the end I was worried about an ‘up’ muffler or ‘down muffler’,” he explains. Having previously built W650s with a range of exhaust designs the final decision was to create a scrambler style to maintain that perfect parallel line. But not only did he craft the pipes, the twin cone mufflers with slash cut tips were also built in house, when you require perfection and you’re Kimura-san, you do it yourself! To finish out the bobber build, all the necessary additions to make the bike street legal were made with a small Bates style headlamp joining the four equally blacked out indicators. The tail light is the Heiwa signature piece that adds that little Hot Rod touch and a single speedo is all you need for carving the coast roads of Shimane. With a set of passenger pegs and a slightly extended design Heiwa seat the owner can even ride two up as requested and there will be no shortage of the fairer sex wanting to be seen on such a bike. Which is all part of the Heiwa experience, a killer custom that will win you trophies, be a beast on the streets and ensure everyone knows you only mess with the best.