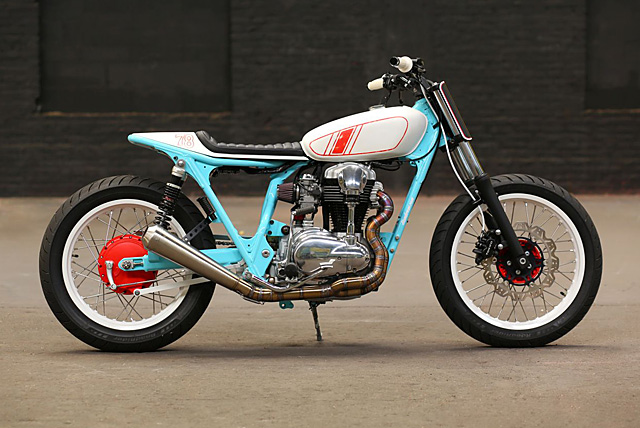 Two years before Triumph relaunched the ‘new’ Bonneville range in 2001, Kawasaki had delivered their W650 to the market. It was a bike that was described years later as being “closer to a ’60s Bonneville than Triumph’s own latter-day replica”. Of course, that line alone will kick off the greatest of debates between purists of the British brand and those who fell in love with the new Kwaka, but what can’t be argued is how good a job Kawasaki did at re-creating a retro machine with plenty of modern-day improvements. While the late ‘90s ushered in the era of the modern race bike for the road with the launch of Superbikes like the Yamaha R1, the W650 gave new bike buyers the option for a much more laid back, classic ride. When German motorcycle enthusiast Uwe Kostrewa first saw one he instantly fell in love and now, years later, he’s been able to create his perfect W650, a ‘99 model come Street Tracker with all the goodies you could ever hope for. When you look at the quality of the build you’d be forgiven for thinking bike building is what Uwe does for a living. But it’s not even his day job, he just loves cars and motorcycles and based on that brilliant exhaust, can weld with the best of them even if it is just a hobby. Growing up his first bike was a Honda Monkey at the tender age of thirteen and ever since he’s been pulling them apart and rebuilding them. His personal garage that he calls Hombrese Bikes currently contains four bikes and a 1966 Mustang, but its custom motorcycles that get his heart beating “many, many bikes, ..for me it is like a drug (a good one) or meditation.” So when it came time to ingest a little W650, Uwe found this 1999 model in reasonable condition from a private owner with 34,000km on the clock. The twin cylinder Kawasaki is legendary for its reliability and with a frame off rebuild in mind the main concern was just getting one in his garage. With the Stang looking on Uwe started pulling the Kwaka apart, but not like those of us who go ballistic and have the thing in a million pieces in an hour. Uwe is far more methodical and slowly removes each piece at a time, even the wiring loom is careful marked, extracted and laid out on the floor for inspection. With the bare frame now in front of him he cut off the long Bonnie like tail section and fabricated a new shorter and squarer looking tail piece that would form the foundation of the tracker rear end. Not content to simply weld the new piece in place, despite it not being load bearing, Uwe went to the extra effort of using slugs inside the round bar for extra strength. The rest of the frame was then smoothed out and any imperfections ground back with the same treatment being given to the swingarm; with both sent off for powder coating in the eye catchingly rich baby blue. When it came to the body work Uwe found an old decision was about to be very fruitful; he’d picked up the ’70s Yamaha Enduro tank for another project but it didn’t fit. Sitting amongst his collection of parts he thought he’d try it on the Kawasaki for size and what do you know, not only did it fit it also gave the bike part of the tracker look he was going for. With a little fettling to get it sitting right he made up a set of mounts and with a new petcock it was ready for its new home. The seat section was to follow and once again Uwe’s meticulous nature pays off in spades. The whole tail section was laid out with cutting board before pin stripping tape was used to replicate the angles and curves he desired. Foam was then used to create the buck into a full 3D model that was then coated with a releasing agent and the fibreglass laid down. The final piece of bodywork to be created was the front number plate that wraps around the forks for a clean look and has two neat openings for the headlights, an LED and spotlight combination. Then it was time to get dirty sanding it all back until every piece was arrow straight and ready for paint. Uwe sprayed the bike himself with the stark white working perfectly with the bold choice of colour for the frame. Vintage red graphics were then laid down on the tank and tail piece that are deliberately given a worn look to artificially age the bike. The front plate is more in your face with the same white and red colour combination creating the “78” logo but shadowed in black so that it really pops. To finish out the look Uwe had the seat base wrapped in a classic black leather with body matching white stitching for a uniform appearance. When he’d first fallen in love with the W650 what had really caught Uwe’s eye was that distinctive looking 676cc parallel twin. Now with one in his possession he was intent on making it look even better and he spent a great deal of time polishing the side covers, repainting parts of the engine and exposing the cylinder heads cooling fins. But the piece de resistance of the long stroke motor has to be the handmade stainless steel exhaust; once again “part time builder” Uwe did it all himself. The lobster cut single side system welded from individual bends of steel, closely wraps tightly around the engine, before finishing it out with a GP muffler. The exposed welds a testament to his skills and the new system easily drowns out the extra induction noise that comes from a pair of K&N pod filters for better breathing. To put the power down the wheels were first powder coated, vintage red for the hubs and white for the rims. They were then relaced with stainless steel spokes before being wrapped in tarmac friendly Avon Roadriders to keep grip to a maximum. The front forks have been internally lowered with the triple trees and lower legs getting a lick of black paint. But it’s out back where the big money has been spent, the soft factory shocks swapped out for fully adjustable YSS items. Braking duties are handled by a two piston Tokico caliper than grabs an EBC wave pattern rotor up front and the stock 160mm drum rear has been rebuilt. Steering the street tracker around the back alleys is a new set of LSL bars, with white grips and a new master cylinder sending the hydraulic power down a white Probrake line. To finish things off Uwe rewired the entire bike building a new loom parallel to the factory unit, the bulk of which is hidden in a concealed tray under the seat. Motogadget’s genius little pieces play part of the puzzle with the control unit powering the m-Blaze Disc bar end turn signals. The headlight combo is from Highsider with the tail light beautifully frenched into the tail piece for an ultra-clean finish. While the final piece to go on is the tiny mst speedster analogue speedo from Motogadget and along with other weight saving measures he’s knocked 25kg off the stock bike. According to Uwe “I am a private person who builds bikes for myself and sometimes for friends or on order for people with enough time because this is not my normal job.” So unless you’re a friend you’ll have to wait while he prepares you a special Hombrese Bikes creation, but given how incredible his Kawasaki W650 Street Tracker turned out and the level of craftsmanship he offers, it’ll be worth every second!