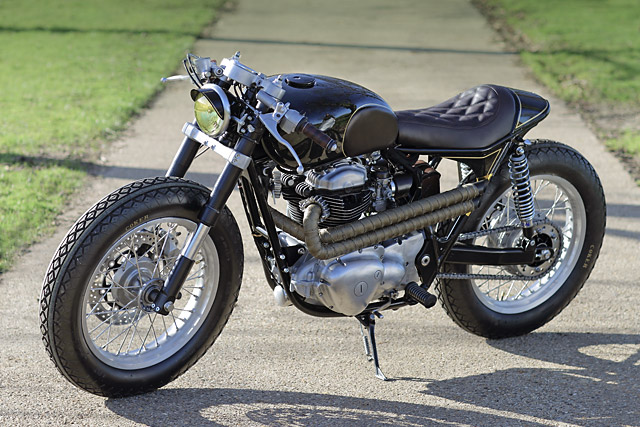 Wales. A rather quiet place, all things considered. Unless coal mining or male choirs are high on your list of wow, it probably doesn’t cross paths with you all that often. But magically zap yourself back in time a few thousand years and Wales would be offering up a whole different set of attractions. And the foremost one amongst a list also featuring dragons, giant Celtic armies and beautiful maidens would be one Mister Myrddin Emrys, a.k.a. Merlin the Magician. So, inspired by Wales’ greatest ever son, our favourite Brit builders have taken inspiration from their wand waving western neighbours and conjured up this little wonder from their alchemic cauldron. Hey presto, meet Old Empire’s magical ‘Merlin’. “The Merlin is our first attempt at a custom parallel twin and our first Kawasaki W650,” notes Alec Sharp; OEM’s chief knight. “We were approached by a customer who is based in Amsterdam. After some emails and skyping, we had a good idea on where we wanted to go with the build. Although much was sent over using our build idea sheet, it was left to us to ultimately come up with a design to take the W650 somewhere we felt it had not been before.” “Looking at the stock frame and engine layout, it became clear why it’s favoured for custom builds. It lends itself to a variety of modifications; from café racer to flat tracker to bobber, the bike has the potential of creating many great custom motorcycles. However, we were not after creating just another great motorcycle. What we wanted to conceive needed to be the best custom W650 in terms of design and functionality. We find it’s always best to aim high.” “The first thing to sort out was the stance, which was achieved by dropping the front of the bike using a set of Ducati USD forks. And although the stock rims are both 18’’, we installed a wider front rim to accommodate the same size Coker tyres front and back. The blunt end was raised 1’’ using a set of  Hagon shocks to achieve that acute angle of attack.” “Fabrication-wise, there was significant workshop and design time getting that minimal rear cowling just right. The original tank retains its front mounts, but we raised the rear end to get that top line running nicely from the yoke down the tank into the seat and off the rear cowling. Making a custom seat pan and installing some handmade gussets front and back was critical in keeping the bike in proportion. The tank also features indents in which leather scallops have been inserted as well a welded skirt that hides the ugly box section top tube.” “We managed to keep all the controls stock, but added some hand-dyed leather wrap and a bit of scotching. Front lighting comes in the form of a big bates headlight with peak and the customer asked for mini led indicators which we mounted as discreetly as possible. We also decided to work with our friends at Smiths again to make up an OEM grey-faced metric speedo which, safe to say, looks mighty fine integrated into the custom top yoke.” “The original state of the engine and frame required us to send them off to be soda blasted by a local firm who did a sterling job of cleaning it all up. The the engine was masked up and the crankcases repainted a high temperature satin silver with the barrels and head going satin black with polished fins. The casings were then fine scotched and the rebuilt carbs with custom air filters were installed to leave the engine looking fantastic.” “Exhausts were hand made from tubular bends, TIG’d together and wrapped to stop them melting your leg. Mini baffles with a good deal of sound deadening material installed take a little edge of what is a really fantastic sounding engine.

The paintwork deserves a special mention as it has to be seen to be believed. Greg from Black Shuck Kustoms achieved the fantastic dark green, smokey, bare metal high gloss finish with gold pin striping you see here. Amazing stuff. In conclusion, this may be one of the finest OEM builds in terms of aesthetics and functionality. We like to think we are improving continually and we can’t wait for our next opportunity.”