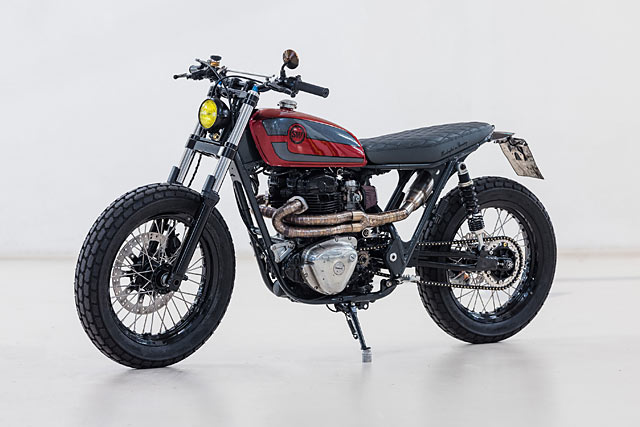 They say a journey of a thousand miles starts with a single step; but for one particular German it only makes sense to begin with a Kawasaki W650. Tommy Thöring has been a mainstay of the European custom motorcycle scene for years and is a regular on the Sultans of Sprint travelling circus. But now he’s packing up his Schlachtwerk operation and heading for the Land Down Under. Sydney to be exact. So to prepare for this next chapter of his journey he’s built a bike to go with him, a killer custom Kawasaki W650, ripe to rip up the Australian roads. 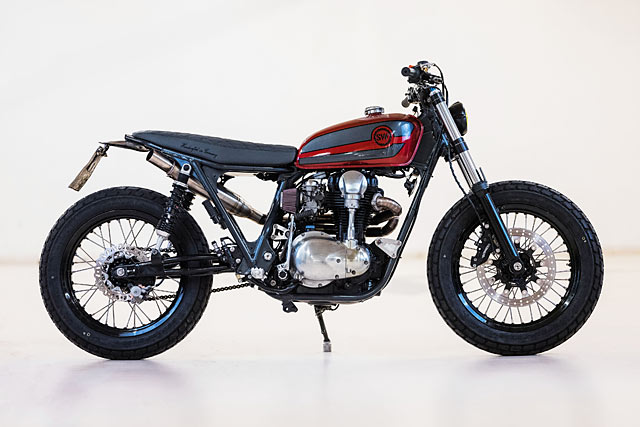 Heading so far from home as a permanent move is no easy decision, but it made the inspiration for the build a breeze. “The inspiration was my relocation to the other side, I wanted to modify my W for a nice and sunny environment, with nice beaches and sandy roads. Yes I know, the K&N filters are not the first choice in sand, but I think in reality this bike will stay on sealed roads 90%. I wanted the lightest W on the road, with a bit more powerful engine, Supermoto seat position and a classic 60s/70s look,” Tommy smiles. 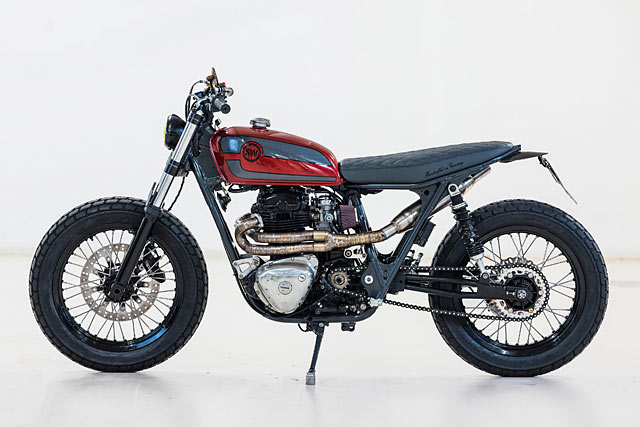 He’s long since made his mark building countless cool customs from the Kawasaki W retro range, so the choice was an easy one. But this particular bike has been in his collection since 2012 when he sold his Hypermotard 1100 S. Sadly the bike was bought blind and without testing, and what would you know the thing just wouldn’t start. Now with just a few more builds for customers left to go before Tommy sets sail it made sense to drag out the old 2000 model W and get it ready to join him on this epic adventure. The first step was to have an engine that would run and it was ripped from the frame so it could get the full Schlachtwerk treatment. Wanting more ponies the bottom end got a full rebuild, with the old adage of ‘if you want more inches, stroke it’ netting a cubic capacity of 740cc. To match the extra gas flow the single cam head was torn apart and both intake and exhaust ports opened up and polished. The electric start was removed to save weight and the kick only operation now spins up faster thanks to a lightened flywheel.

[superquote]“Horsepower is now up 15 ponies over stock to a very healthy 65hp.”[/superquote]

To feed the flames the stock Keihin carbs were pulled apart, rebuilt and given new jetting to suit the mods to come. The first of those is the fitment of K&N pod filters that flow more freely and ditch the weight of the factory airbox. But it’s the exhaust that is the piece de resistance, an area of every motorcycle that Tommy always gets just right. The 2 into 1 system is all stainless and beautifully welded, hugging the lines of the bike and finishing under the seat for a sleek finish. Horsepower is now up 15 ponies over stock to a very healthy 65hp. 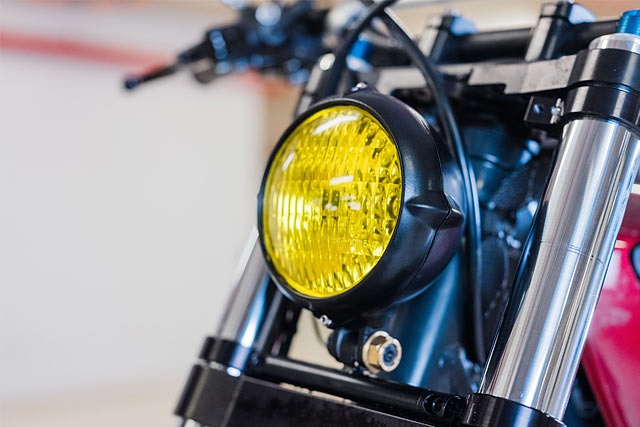 But power is only one side of the equation and the chassis modifications help bring down the weight; with the first being the CNC’d engine mounts. Now look closer and you’ll see things go much further in the pursuit of perfection with a full chromoly steel custom swingarm. With all the calculations done Tommy then gave Wilbers a call and ordered a set of custom rear shocks to suit his exact specifications. While up front a fully adjustable set of Yamaha forks that mate to the Kwaka with CNC’d triple trees do the trick. 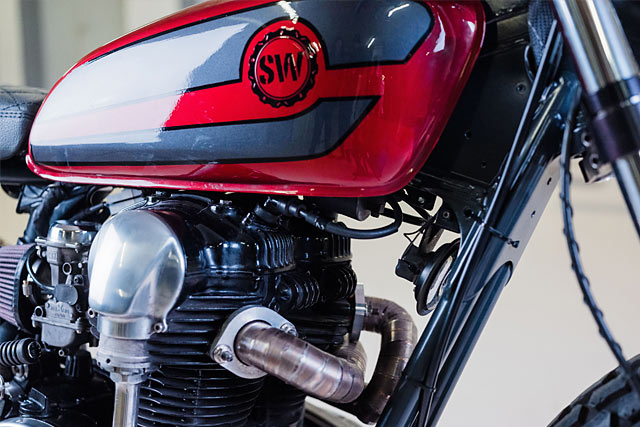 Suddenly the little retro machine was becoming quite the rocket, so to slow it all down there’s a 300mm brake disc with 4 piston Beringer caliper in combination with Magura HC1 radial master cylinder. Even the rear gets an upgrade with a Brembo caliper clamping a wave pattern disc. With the suspension/swingarm changes the factory hubs no longer fit, so KTM 690 items get the task. These allow for all new rims able to run a tubeless tyre, stainless spokes make them fit before being wrapped in Dunlop Dirt Track rubber. 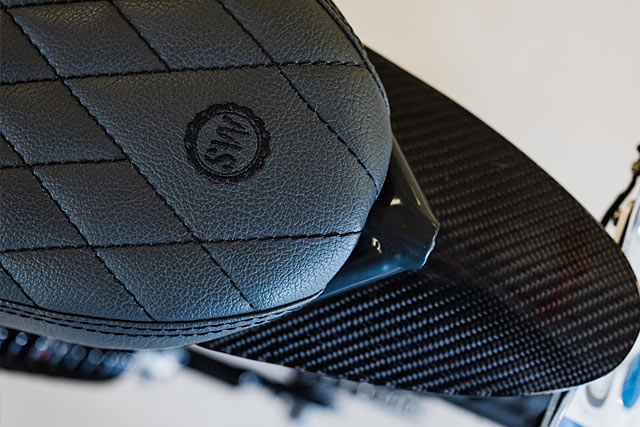 Now to impress the Australians in the looks department Tommy gave the W the full Schlachtwerk visual makeover. The rear of the frame has been cut off and hooped, with extra tabs removed before the whole thing was coated in a dark grey. Next up a smaller Z200 fuel tank was adapted to fit, given a Monza filler and then coated in glorious deep red with matching graphics to let you know exactly who built it. While at the rear the diamond stitched seat is embroidered with “Handcrafted in Germany” lettering, we Aussies can’t take credit for him.. yet! 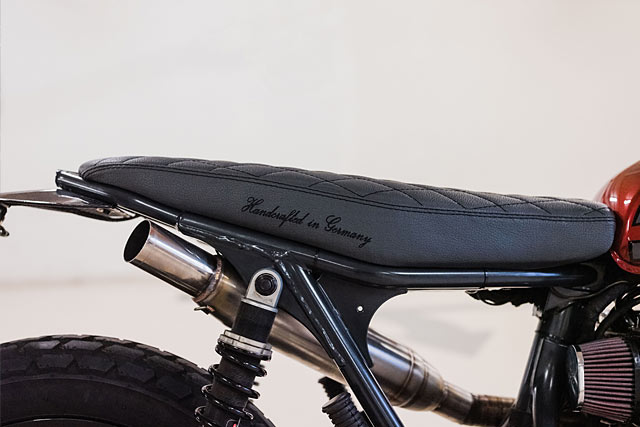 A Japanese style headlight with yellow lens adds some colour to the equation and the Kellermann indicators keep the police the world over happy. To finish the bike off a custom electronics tray is mounted under the seat and features a lightweight battery, simplified loom and ends by supporting the carbon fibre rear fender. All the sweat and tears have paid off with the W740 now weighing a staggering low 146kg. That should save Tommy on shipping the bike too and we wish him well as he brings his custom cool skills to Pipeburn’s backyard!