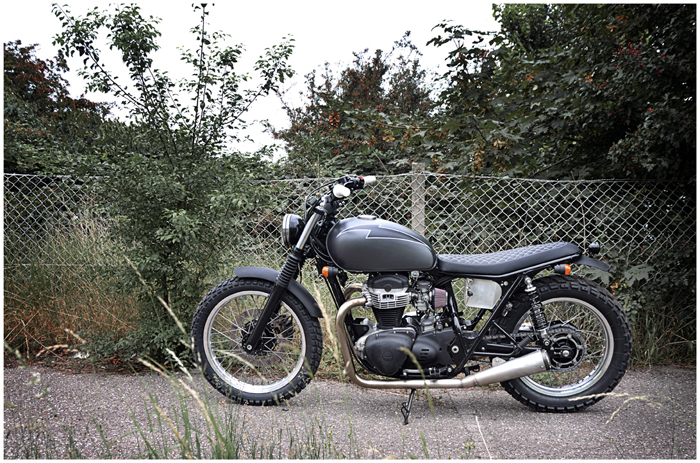 I have a confession to make. I’ve been having a relationship with another girl for years behind my wifes back. I keep her tucked away in a garage up the road and I’m always making excuses to go see her. I could ride her all day long and most of the time I do. Then at other times, it’s just a quickie up to the shops – but always satisfying. You could call her my mistress. My metal mistress. So when Wrenchmonkees sent me an email saying they were building a bike for the Mistress Gentlemen’s Motorcycle Club (MGMC), I instantly related to the clubs name. Not because it sounds like a strip club (that helped), but because I like the idea of a motorbike being a ‘mistress’. MGMC is a fractional ownership club for luxury motorcycles in Lisbon Portugal. You pay an annual fee and you get to choose from the bevy of ‘Mistress motorcycles’. The more you pay, the more quality alone time you get to spend with these bikes over the year. “We have a Ducati Diavel, a BMW S1000RR and a GS 1200, but we needed something unique to complete our fleet” says part owner Gonçalo Henriques. “Our goal was to have a dream garage for our members. First we were thinking of a Harley but we contacted Per from Wrenchmonkees, that we found in a Portuguese magazine called Rev and project Mistress was born!” Now MGMC had found the builders to build this custom bike, all they needed now was to decide on the model. They knew they wanted a scrambler and found inspiration in Wrenchmonkee #6. “We needed a reliable, easy and fun to ride bike so the W650 was one of the first choices. We told Per what were our favourite bikes from them and the only demands were white grips and supertrapp exhausts!” says Gonçalo. This is how Per from Wrenchmonkees describes the ‘Mistress project’: “We agreed to make a project based on the W650, because of it’s more reliable engine than the old Z 750’s, and the overall better condition of a newer W650 compared to an old 750. We had to avoid major changes on the bike for easy approval, and for future replacement of parts and service. We aso had to make the bike easy handling and rideable, due to the fact that it would be used by many different riders. We kept the frame, swingarm and wheels standard. Front fork is standard but lowered by 30mm which also eliminated the very soft standard feeling of the fork, combined with new progressive springs and the tires are Heidenau K60’s.” “The bike was stripped and we made a new battery box, fenders, seat and brackets for the headlight and turn signals. Top yoke was cleaned from excessive brackets and a new ignition lock was placed in the batterycase. Bitubo rearshocks replaced the original and are 25 mm shorter. The bike has a weight loss of almost 15 kg. A Motogadget, “motoscope tiny” speedo was placed were the old ignition lock used to be, along with a classic black aluminum handlebar and Beston style white grips. New Supertrapp mufflers are welded on to the standard headers and angled to give some ground clearence when cornering and for a bit more agressive look. Original foot pegs are replaced with a more motocross style footpegs. Engine is standard, but with the K&N filters and the Supertrapps we needed to rejet the carbs, now it runs really smooth with a sweet deep sound.” Getting dirty with his Mistress

The Wrenchmonkees have transformed this W650 into a much lighter, more agile and some might say a more fun bike than the original – isn’t that what a mistress should be like? Whatever the case, we’re sure the ‘gents’ at the Mistress Gentlemans Motorcycle Club will be queuing up to ride her.