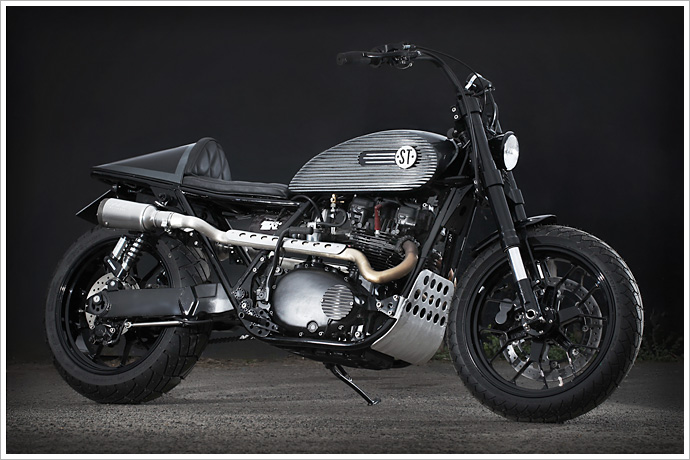 Isn’t it great when ideas just work together? Concepts that aren’t easily conceived, but when enacted turn out awesome? Like using a Mini SU carb on a Kawasaki engine, or using stainless dairy pipe for an exhaust system. Graham Braid of Street Tuff Customs is one man who likes using different ideas that work together, and the latest example of this is this tough looking Kawasaki Z750B street tracker. With three years of work, and a little help from some friends, Street Tuff Customs has produced one mean machine with customisation up the ying yang. Looping the frame was the first task Street Tuff undertook, after which a ZZR swingarm was fitted in place of the stock Kawasaki unit. Mounted on the custom swingarm are 80s Marzocchi piggyback shocks, one of the retro touches on the bike. An Aprilia RSV has donated it’s front forks and OZ rims to the build, with custom machined yokes hold the front end together. The OZ rims are wrapped in Dunlop Mutant rubber at the front, and a Dunlop D616 at the rear. Whilst the frame was being work on, the engine was stripped down and rebuilt, being given a coat of matt black paint on reassembly. Mounted off a custom 1 into two manifold, sits the SU carburettor from a Mini, breathing in through a K & N oval filter. The scrambler style exhaust system is all specific to this build, stainless steel dairy pipe ending in SuperTrapp shorty mufflers, the whole lot brush finished. By Graham’s account the fuel tank was a ‘big job’. The original tank was chopped up, machined metal finned plates bonded to it, and moulded to blend in. Topping it off, Street Tuff has fitted an aircraft style filler cap. Taking inspiration from classic Norton racebikes, the tailpiece was formed from scratch using sheet metal. Hidden within it is the battery, rectifier and some electrical componentry. Through using a mix of older and newer styling techniques, Street Tuff has produced a bike which shows their talents. Componentry offsets each other, the electronic speedo mounted on the flat track bars, offset against the leather diamond trim ‘bum pad’. The LED taillight offset against the 60s style tailpiece. The OZ rims versus the Scrambler style exhaust. It’s all goes against each other, but together it has produced a bike that stands out from the crowd. See what I mean about things just working together?