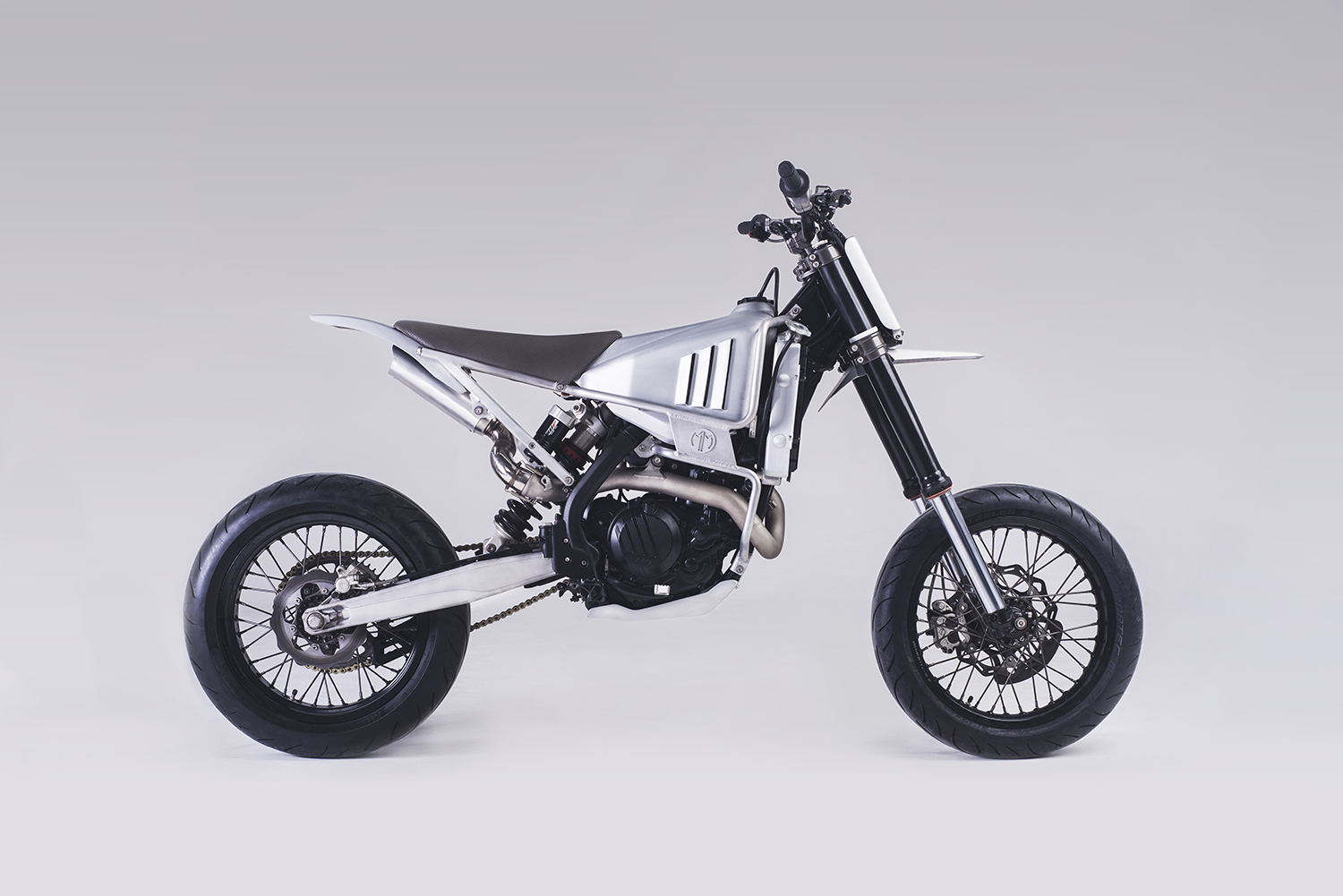 Imagine the life, taking a swim on any one of the hundreds of beaches on your island home, jumping on your beast of a bike for the short 1km ride back to your place of business. Maybe stopping on the way for some amazing food or coffee, a nearby bar in the evening just across the road. Your workplace is a paradise itself, the display area a cornucopia of cool customs for sale and at the rear a huge workshop churning out even more. This is the very real life of Dirk Goetz, and amazingly he’s made it all a reality in just the last five years. From Bali with love, he sends us the latest creation from his Malamadre Motorcycle empire, a computer designed and handcrafted work of art, a killer KTM called MM Shark.

The journey from dream to reality has involved an incredible amount of hard work, but Dirk tells us how it all got started. “The brand was born and established in early summer 2015. We managed to source a Suzuki Thunder 250cc from 2002 with 20.000km on it, we really wanted to modify it into a Brat style, with a classic and vintage look. So, we went and created the first Malamadre Motorcycle (MM1), at a close friend’s garage. One day, I was riding on the MM1 and stopped at a supermarket. When coming back to my bike, a man was staring at it. He started to say how amazed he was with the motorcycle, asked who built it and where he could get one from! So, I, of course, said that I could also build one for him. This was the first MM customer.”

Word spread fast across the island and as more of the MM bikes appeared, so to did the number of customer lining up to place an order for their own machine. By September that year, the headquarters in Canggu had been established and five years on more than 100 insanely cool bikes have been built by Dirk and his team for customers all over the world. You can even rent a custom bike from MM but the owner of this machine walked in knowing he wanted a bike for keeps. The only problem was he wasn’t sure what bike to start with, only that it had to be lightweight, have punchy torque and be capable of a little off-road work with a change of tyres.

Dirk knew the answer lay in a four-stroke, enduro model from either KTM or Husky and the search commenced. What it turned up is one of the best of the bunch, a 2017 KTM 450 EXC Six Days. Of the 131 off-road bikes available from dealers in 2017, users of Motorcycle.com have scored it number one, with owners giving it five stars in every category. But the look had to be totally transformed, “He asked us to create a bike that looked junkier and modern but at the same time keeping the lightness and manoeuvrability of the dirt bike,” Dirk explains. A very realistic 3D design was created and in love, the client gave the green light.

Rolled out the back into the multi-bay workshop the KTM was completely stripped down, cleaned, sandblasted and given a hit of powder coat on just about every surface that wasn’t going to be customised. “We agreed on going full aluminium to make the bike light, clean tail end, hidden electrics and elevated but comfortable seating position. We also agreed on matt black, raw aluminium and metallic grey colour scheme.” That alloy bodywork is superb and from the front on you’re greeted by an angular hand made fender and the front number board that with LED headlight provides an ultra-clean look.

The tank was next on the list, but with it on the bike Dirk realised something was missing, “I went back to my computer, studied the design, tried to get an image in my head…and the result is pretty visible…. the gills!” The integration of the bodywork into the frame is flawless, with the supporting architecture flowing seamlessly to the subframe. Perched on top is the all-new seat, trimmed up to perfection it provides a comfortable place to be, while still remaining sleek like the rest of the design. The neat rear fender and radiator covers all helping to ensure no stone is left unturned.

The engine hidden beneath the alloy is a big part of what makes the MM Shark such a riot to ride, taking all that competition technology and laying it down on the street. The 449CC single spits out a factory fresh 62hp, but its the torque at any rpm that makes the bike such a beast. In standard guise, it wouldn’t fit the look, so it’s been taken from its factory silver finish and the entire engine is now black, black and black. The exhaust is new, the full system wraps tightly against the mad machine, with the FMF muffler swapped for a polished under-seat can that leaves you in no doubt that this apex predator means business.

With the suspension and braking package dripping with competition goodness from the factory, it was simply a matter of a front wheel and tyre change to get the bike right for the road. With that in mind, a full set of lights was needed for the streets and you’ll barely know they’re there until the indicators and taillight come to life in full-LED glory. The finished product is artwork standing still and an absolute raging riot when the right-hand gets twisted. It’s clear to see why Malamadre Motorcycle is such a booming success and here’s hoping to many more off-road machines being turned into cool customs, this savage street scalpel has more than earned the name, the Shark.