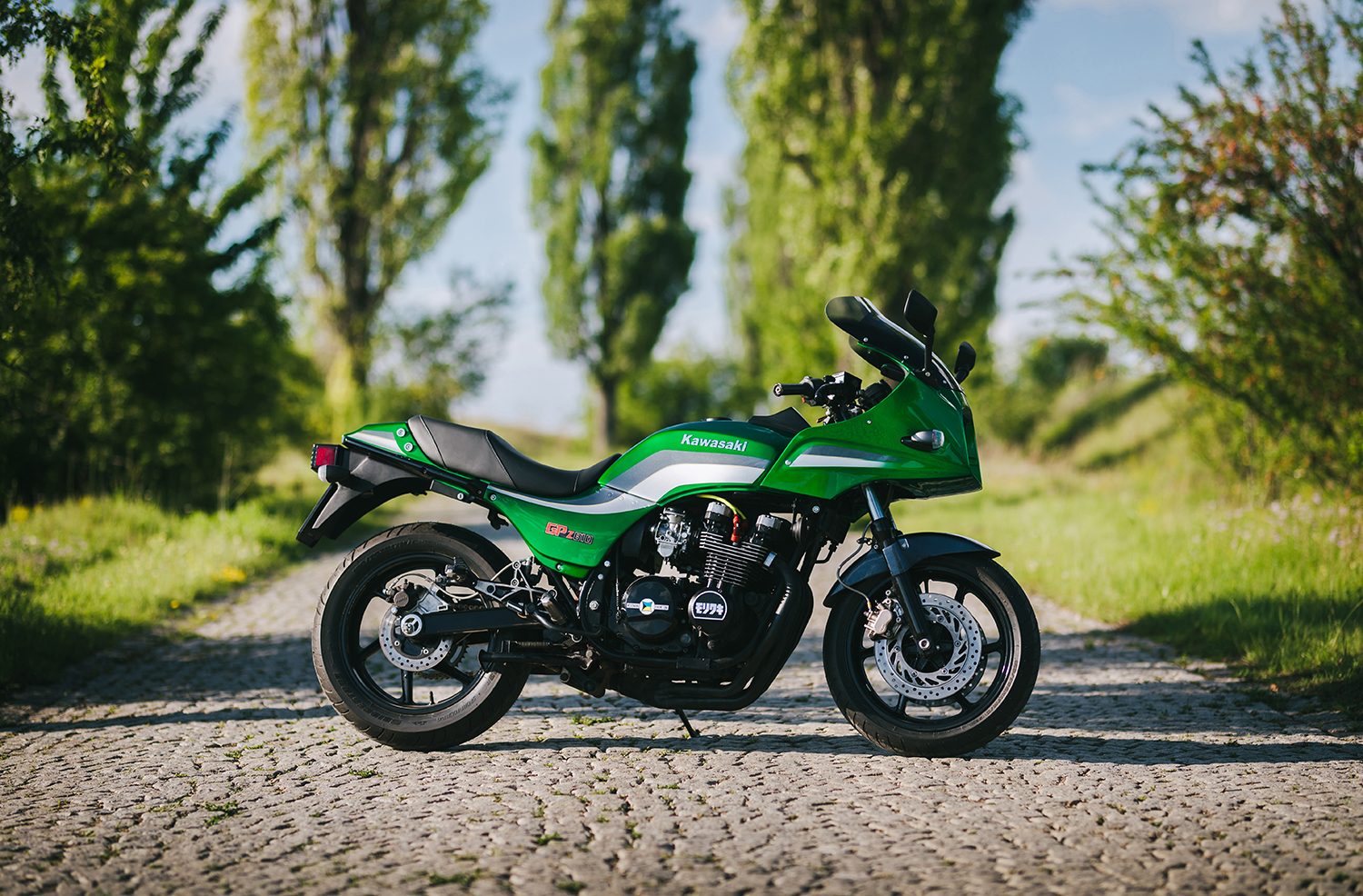 If you can pick a trend before it really takes off there is serious money to be made, and if I had to bet, I’d wager the lot that the next big thing in the custom world will be the return of the ’80s superbike. Not only do they remain plentiful and cheap, they have a racing pedigree just waiting to be tapped into. Take the Kawasaki GPZ750, left unloved they’re neither pretty nor fast but a trip down memory lane reminds us this is the giant killer that Wayne Rainey rode to superbike victory. So it might have taken a few years for the stars to align, but once they did, Serbia’s Marko Visacki was able to complete this killer Kwaka that remains true to the original and yet better in every way single way.

The year was 1983, Rainey was yet to be the superstar Yamaha rider taking the world by storm and instead was plying his trade in the American AMA Superbike series. His teammate of the year prior, Steady Eddie Lawson had left for the world GP paddock and campaigning the 2 valve, air-cooled Kawasaki, it was expected that young Wayne would be massacred by the new V4, four valve, water-cooled Hondas. Against the odds the California kid steered the big Green Kawasaki to victory and the legend was born.

Fast forward to 2010 and Marko discovered this 1984 model, as a half restored and then abandoned project in Austria. Knowing his racing history he saw the potential and snapped it up, boxes of parts and all and headed home. Working from his back shed he set about a restoration, “I got it completed, and rode it for about 7-8 years in original factory shape,” he recalls. But newer bikes were acquired, most notably a ZX9R and the old GPZ was resigned to a life in a friend’s barn. But in the back of his mind, the older bike kept calling his name, refusing to be forgotten.

There was only one thing for it, a full on build! “The lack of power compared to the modern things wasn’t the main problem, but I was really tired of that 80s railroad train type of handling. Also, I decided that I’m not gonna cut anything off the frame or make irreversible changes, cause maybe one day I’ll turn it back into original shape.” Rainey had the same complaint, the handling scared the crap out of him, and to rectify the problem Marko turned to the darkside and has switched to a set of Honda RC36 VFR750 front forks.

To maintain the factory ride height a set of CNC machined fork extenders are fitted to the top along with a set of period correct VFR1000 adjustable clip-on bars. The Honda also donates its superior twin-disc brake setup and its 17in front wheel, allowing for a far greater tyre selection than the old 18. The rear end however was much more work, with a switch to a ZR7 rear shock requiring an overhaul of the Unitrak linkage. The alloy swingarm is retained and a Honda CBR600 17in wheel added, with new offset spacers to allow for the 530 chain conversion. While a CBR600RR rear brake assembly and braided lines front and rear complete the task.

With the handling now spot on attention could turn to the bodywork and there is no mistaking the unique look of the GPZ. With all the panels arrow-straight the stunning colour has been laid down flawlessly and the candy pearl forest green comes magnificently to life in the sunlight. To keep the incredible look going, Marko opted to paint on the decals rather than use a generic sticker kit and the results speak for themselves. While a new front headlight, smoked screen, and clear indicators ensure there is no distracting from the mouth watering hue.

But if the look catches your eye, it’s the trusty 8 valve overachiever that grabs your heart, and Marko has ensured it’s a brute. With it all ripped apart he took care of the starter clutch issue that plagues the model with a secondary shaft assembly from a ZR7. Then the cases were bored 3mm and a set of high compression Wiseco pistons fitted up resulting in 810cc at 10.25:1. The ignition systems of the day struggled to keep the spark alive but a racing pedigree means a brilliant replacement is found in an all new Moriwaki assembly.

Giving the bike its soundtrack is a race engineered L&W 4 into 1 exhaust system, that not only adds the ponies but allows for the removal of the oil filter without pulling off the pipes. While a modern dash assembly with shift light means whether by sight or sound each gear is grabbed right on time. The finished result is a thing of beauty, with every upgrade well thought out and the performance to match the perfect good looks that defy the bikes ’80s styling. And with all that Marko has achieved, why wouldn’t anyone want to follow suit and enjoy the old school superbike lifestyle.

[ Photography and build by Marko Visacki ]