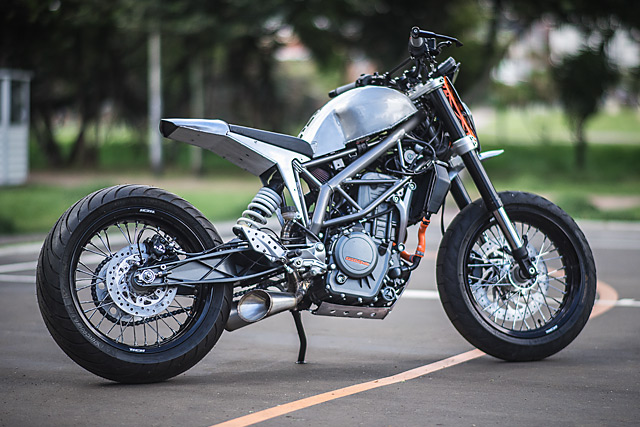 Colombia’s Garaje 57 is growing an impressive reputation for hand crafted machines that have been ordered by clients from around the world. But with the new KTM 390 Duke landing on their shores, there were two very good reasons why Bogota brothers Esteban and Gustavo Pasquale decided to apply their old school fabrication skills to a brand new machine. “The first one is that the Duke here in our Country is beginning to be popular, and at first sight it was a real challenge to take that bike and make it our own.” The second reason; popular Colombian footwear brand BOSI had entered the Motorcycle apparel game and commissioned the pair to build a machine to catch eyes at trade shows and in window displays. Two big challenges could be taken one at a time, but the brave men from Bogota combined them both to build a truly one-off Duke known as the “Silver Arrow”. For a motorcycle in the Naked category and a small one at that the Duke still has a lot of plastic compared to anything from days gone by and this was the first area of attack for the Brothers Pasquale. From the plastics around the tank and the headlight, to the belly pan, seat trim and fenders it was all removed to reveal the 390’s bare bones. From here they had a better idea of the exact lines they were working with and could formulate their new design. One thing the plastic removal revealed was a bigger and heavier subframe than first thought, as true fabricators they had no fear in pulling out the grinder and cutting it off. But rather than construct a new subframe next the wise decision was made to first get the overall stance right so that the new one piece rear would truly match the bikes stance. For the Super Motard look the front rim was downsized half an inch to a 16 ½ inch spoked item over the modern cast design and the rear a 17 inch SAXESS unit. To make it all work new components like hubs, a rear sprocket and adapters were all machined in-house from 7075 aluminium before wrapping the new rims in Michelin rubber. With a rolling chassis to work with the metal work commenced with the focus on creating an aggressive look that still retained some classic elements. Completely hand crafted the tank is all aluminium with the front section given the smooth clean lines of a peanut tank before the rear section was tapered and given knee inserts for an industrial take on a classic cafe racer. Being mounted to a trellis frame required the fabrication of tabs front and rear before topping it all off with a Garaje 57 7075 alloy gas cap. With the frame modified to take a new subframe the brothers had to find a suitable aluminium to construct it from with 6061 not widely available in Colombia and their stocks of 7075 being unsuitable due to its potential for micro-cracking when welded. With their engineering textbooks open they found the solution in 7020 that was used to shape, hammer and weld the small and angular subframe that forms the seat base with the same material being used for the rear hump. Filled and painted it would appear to be one piece but the boys opted to leave their impressive fabrication skills on display with the raw finish. With such brilliantly crafted raw alloy body work there was no way the brothers were going to ruin the clean lines with gordy lighting, but the request had been for a street legal machine. So hidden in the tail section behind a custom mesh insert is an LED tail ight with integrated indicators. For the very same reason there are indeed front indicators, but without being illuminated you may never see them, it’s a designers own version of Where’s Wally. The front light is a KTM item, but removed from the bulky plastic surround it maintains its front on shape but with the new alloy mount is virtually flat against the forks. The challenge of keeping such a unique machine street legal also posed challenges that proved to assist the look of the machine, the hand-made alloy front fender was high-mounted like a Ducati Hypermotard and definitely adds to the theme. To complete the body work a functional aluminium bash plate was fabricated and placed where the cosmetic plastic belly pan once rested, it’s a simple item that shows the full evolution of this build. All of this aluminium body work has resulted in a bike that with fluids on board that weighs just 119.7kg, there are literally professional athletes running around that weight more. Combining that level of weight reduction with the thumping little 373cc single cylinder engine results in one hoot of a bike to ride. Bare in mind this is no basic single, high-compression, short stroke and impressive Bosch ignition and fuelling means the little single has all the torque you’d expect from such a design with impressive horsepower figures and an ability to rev and rev hard. Reliability is also brilliant as not only is the engine liquid cooled but features race inspired forced oil lubrication with 2 Eaton pumps, it’s high tech in a little package. To squeeze some extra ponies out the whole lobster cut exhaust system was made in stainless steel, welded in-house utilising the back purge method in order to get minimal flow distortion. The slip ons are a megaphone style with slash cuts to resemble the exhaust system of a helicopter and finish out each side of the swingarm. Wanting to integrate the logo of the BOSI Motowear line into the bike the call was made to Juan David Rodriguez who applied the block line pattern onto the tank. What you’ll notice when viewing the machine from above to look at the subtle logo is that Garaje 57 not only fabricated all of the alloy parts, the grain of the aluminium all flows in one direction, words cannot describe this level of attention to detail. The other subtle visual impact the brothers wished to make was a small use of orange colour to remind people this is indeed a KTM. So the engine was treated to some KTM orange hosing, the headlight support given a coat of the same colour and the lettering in the engine also given a splash of orange. One final alloy piece needed to be made, the drive cover, and with the workshops new toy being a vintage Bridgeport Mill their Father came in to show them just how to use it and create this finishing piece. With that piece mounted all that was left to do was fit some practical parts that had already been sourced. A set of Renthal bars give that wide Supermotard visual and Renthal also supplied the grips with this urban warrior keeping the riders hands safe with MotoGP style bar ends. The leather seat was deliberately kept simple so as to be functional without drawing too much attention and the KTM instrument cluster and switchblocks returned to their original place so this bad ass piece of motorcycle design could be fired into life, ridden through the Bogota streets at rapid speed while still serving as a perfect display piece for BOSI, it really is winners all round!