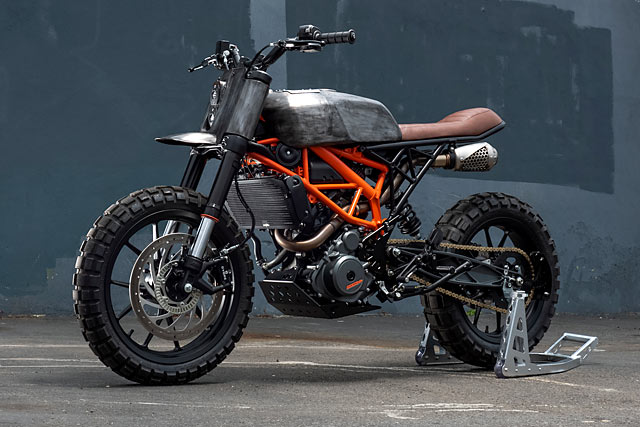 ‘Colt Wrangler Lyons.’ With a name like that, I’d be disappointed if he didn’t come from Texas. Based out of New Braunfels, in the North Eastern corner of San Antonio, this charismatically named 26-year-old turned his hobby of hacking and slashing at motorcycles into a business in 2015. And he’s been pulling in a steady amount of work since. His latest creation is this, a tight little Scrambler built around a brand-spankin’ new KTM 390 Duke. 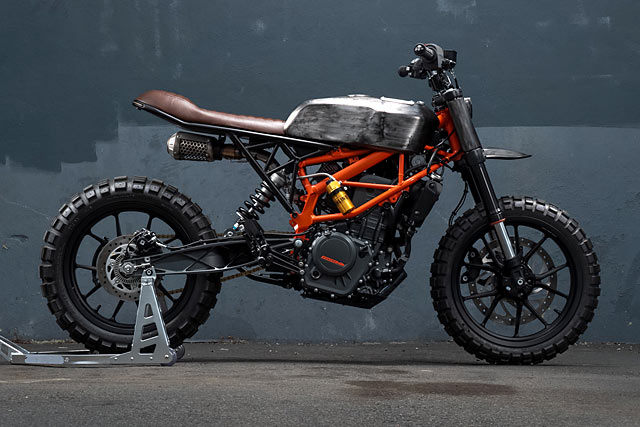 Colt’s previous work had brought in an offer to build a bike for a client working overseas. “He really liked a 1970’s Honda scrambler that I’d done in the past,” Colt says, “but he wanted a motorcycle with inverted forks and monoshock rear suspension – and no more than 500cc. We came to the conclusion that a new KTM Duke 390 was the perfect platform for the build”. 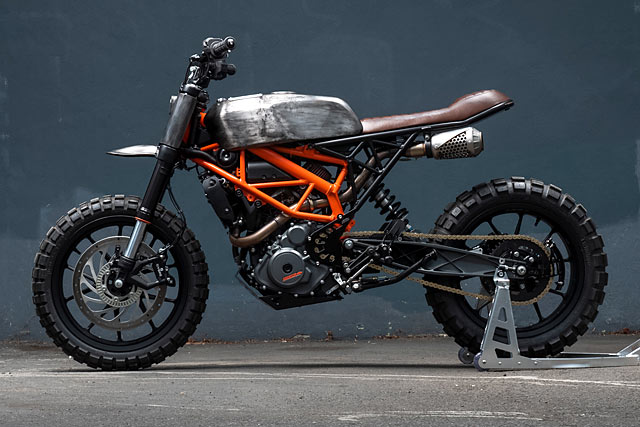 And he’s bang on the money. Loads of bike builders are using the KTM as a platform for their work. Not only is it a lightweight, punchy little ride that’s not too expensive it also has a trellis frame and bodywork setup that heralds some remarkable results when attacked with a grinder. So Colt shot off to his local temple of orange to buy a new bike for the client. “It felt a little weird tearing down a brand new bike,” he says. 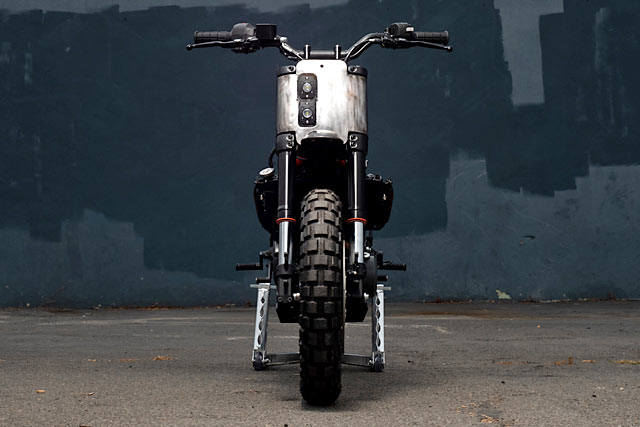 And a new bike presents some challenges during a build. In the case of the BabyDuke, it’s the bodywork and the dash display. If you’ve never had the chance to butt heads with the 390 Duke in person, the instrument cluster is a big ol’ eight inch full-colour LCD panel. It’s pretty damn amazing – showing everything from charging volts to engine temperature. Hell, it can also be paired to your phone. But on a build like this it’s decidedly out-of-place. So Colt decided to hide it in the new tank he had planned.

[superquote]“Sometimes I think that building a tank from scratch might have been better but I’m pleased with how it turned out.”[/superquote]

“I started with an old Yamaha RD400 gas tank,” he says, “which I outfitted it with the standard KTM fuel pump and ignition switch”. In a twist, he mounted the factory 8” LCD cluster into the tank itself behind a clear plastic cover. “By the time I was finished planning I had 12 separate pieces that needed to be welded together. Sometimes I think that building a tank from scratch might have been better but I’m pleased with how it turned out.”

Next up came work on the subframe, the rear end of which was built from scratch – with flush mounted tail lights and turn signals. All of the electronics were squeezed in between the subframe pan and the seat pan. The seat itself was made by Colt, but then sent off for upholstery. 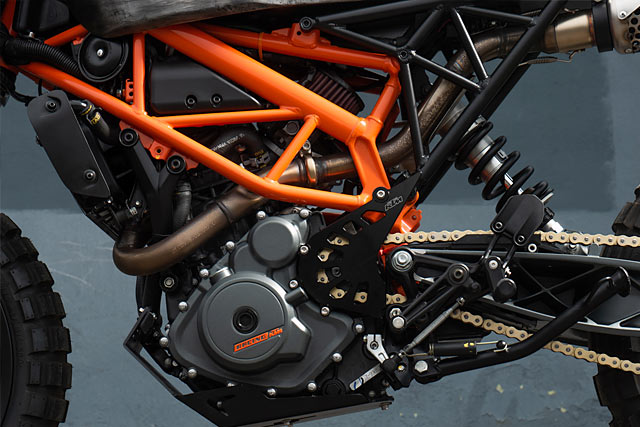 Engine wise the little Duke had it’s airbox and emissions regulation equipment torn out and a K&N intake pod filter and crankcase breather fitted. The exhaust was the next item in Colt’s sights. He opted for a customised stainless steel slip on silencer. To make that, Colt used an aftermarket muffler but replaced the shell with sheet of perforated steel to give it a more rugged look. 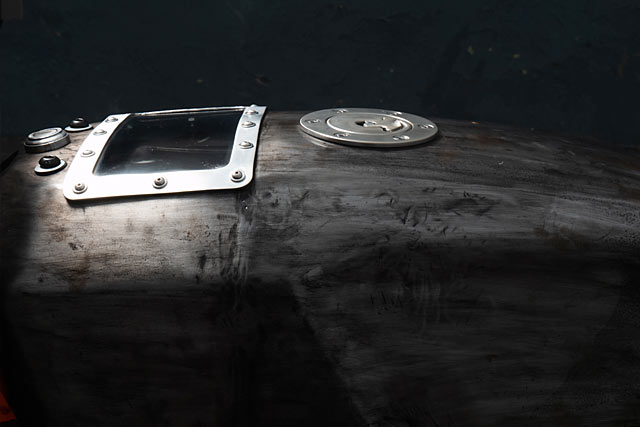 The front headlight was made from sheet steel and an old fender, with two rigid 1″ flush off-road lights for the headlights. Apparently, they work damn well. Underneath it all the suspension has been rebuilt to add an extra 1” of ride height to fit the customer better. All the exposed metal surfaces were stained on request by the customer and then coated with a matte clear. The wheels, shock coil and subframe were powder coated flat black. 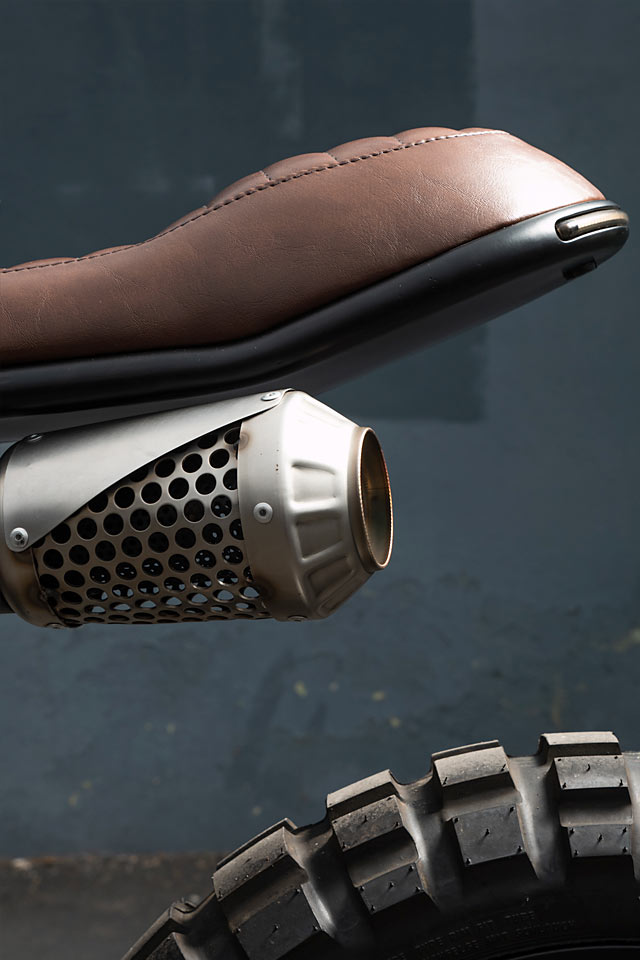 The result of all this is a great little blend of old and new, a scrambler that can be ogled and ridden hard, without losing any of its reliability or functionality. It’ll make it’s new owner damn happy having Mr Lyon’s latest creation. Once again, Colt proves that he’s a gun when it comes to building custom motorcycles. 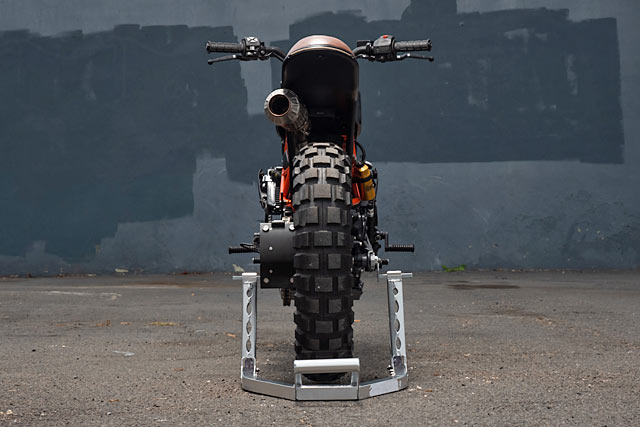