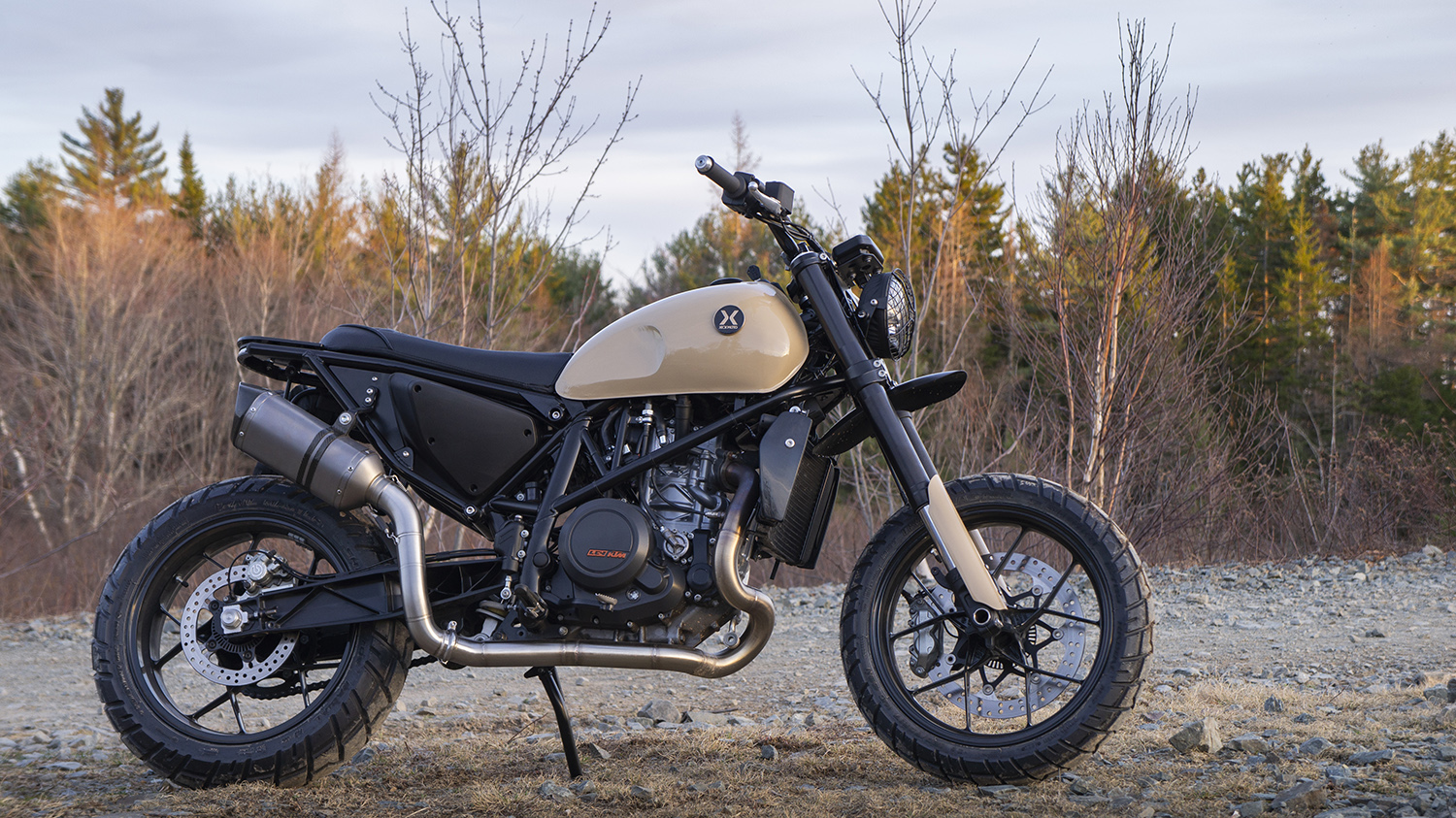 The riding season in Nova Scotia, Canada, is a pretty short one compared to other parts of the world. So when the weather is good, the good get going. With hundreds of miles of beautiful blacktop on the legendary Cabot Trail to enjoy, you’d want to make the most of it on the right bike. Jeff Shaw, who is one half of Halifax-based KickMoto, knows the area well. After spending the last year riding a Husqvarna Vitpilen 401, he decided it was time to build himself a bigger bike that could take on the local highways and keep up with his riding crew. After some research he landed on the reliable and versatile 2018 KTM Duke 690 and bunkered down for the winter, building his ideal bike for when the roads turn from white to black again.

The KTM Duke turned out to be the perfect donor bike for what Jeff had in mind. “I really wanted a bike that was a mix between a scrambler and a supermoto,” recalls Jeff. “The Duke was the obvious platform to build this bike off of. Its lightweight design and large single cylinder were perfect attributes for the build.” The concept was a simple one: take a modern, mechanically sound and reliable bike and give it a scrambler-style aesthetic and capabilities.

The first thing to work out was the design of the bike. “I started sketching, and then sketching turned into some photoshop renderings that inevitably gave us the proper direction,” he says. “There were many different design directions, but we decided to go with something clean, proportional, and functional.”

With the concept design in hand, the ground-up build started with the subframe. “The Duke has a cast two-piece subframe design, which was fantastic in terms of finding the centerline of the bike and creating a symmetrical subframe right in place. We opted to keep the airbox and instead modified it slightly to work with the design. We placed a compact lithium-ion battery from Shorai into the rear of the subframe, mounted in a custom holder. We reused the keyed seat latch so we could have access to the trunk where we were able to house the stock-supplied toolkit, along with a charging plug for your phone or heated accessories.”

Moving up front, the guys chose a Koso Thunderbolt headlight for its slim lightweight design and the extra lumens needed for backroad riding. They used Motogadget blaze pins for signals to keep things discreet. These were all fitted to a custom-designed mounting plate that was cut in three pieces by waterjet and welded together. They also 3D-printed some custom spacer for the blaze pins to fit the curvature of the headlight mounting brackets. All of this was rubber-mounted back to the triple trees to keep the vibrations from the big single cylinder minimal.

At the back of the bike, KickMoto integrated a rack to strap some extra gear or luggage. Right below this custom-designed rack sits a 3D-printed LED housing. They came up with a clever solution for the LED Hoop: the 3D-printed housing plugs into the end of the frame rails and creates a curved pocket where the LED strip for the brake and signal lights can sit.

The Duke already came with an Akropovic exhaust, although it sat down too low for the scrambler-style look they were going for. They chopped the header off right after the oxygen sensor and ordered up some 2” stainless tubes in various standard bends. They then routed the exhaust in an indirect path, making an extra sweep back and forth to keep the overall length of the system maximized. “We raised the muffler up above the wheel and started to connect the dots. We 3D-printed a set of our own 15-degree exhaust building blocks. The whole thing was TIG-welded together by Jordan, the other half of KickMoto.”

Moving to the other side of the bike, they created a removable side rack that can hold some gear or spare fuel cans for those longer rides. Directly above the racks are the custom seat pan and seat, which were made from aluminum and covered in vinyl and synthetic suede for a two-tone look.

The stock KTM tank was always going to be swapped for something a little more classically styled. Jeff decided to challenge himself by trying his hand at building his first tank. He purchased a small English wheel and began practising. “I was instantly intrigued by the process and just decided to go for it. If it didn’t work out, we would just try again. The plan was to create one half of the final form out of foam, then make templates that could be transferred to sheet metal and be hand-formed into its final shape. The shaping went surprisingly well, until you realize you have to make a mirrored half next. We used a Harley Davidson bung welded into the top and a Motone Gas Cap made for Triumphs.”

The tank took a lot longer than expected, but the end result is amazing for his first attempt. It wouldn’t have been possible without their friend Marc at Urban Hand Craft, who let them use his expensive welder and shop space to do all the welding. Lastly, the tank was given some paint by Rob at Top Coat Automotive and the guys 3D-printed a pair of KickMoto badges in steel, painting them in black and a layer of epoxy.

The end result is a very functional and well-thought-out custom KTM Duke that is capable on the highway and can hold its own on the back trails. Now the snow has melted in Nova Scotia and Jeff’s bike is finally finished, you can find him enjoying the long sweeping roads along this magical place on the northern Atlantic coast.