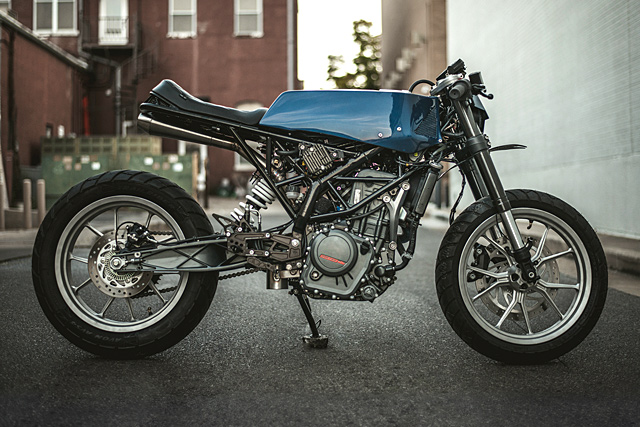 If you’re a learner rider or like small capacity machines then it’s never been a better time to buy a new bike. With the market absolutely jammed packed each unit has to be competitively priced and stocked with features if it’s any hope of selling. But apart from a few notable exceptions this is a category almost completely devoid of soul, half the bikes look like they’ve rolled off the same production line and been slapped with a different sticker. So to truly give his client the best of both worlds, One-Up Moto Garage’s Taylor Art Henschell spent time with just such a machine until she finally revealed her spirit. From this instinctive feels he’s crafted a 2015 KTM RC390 that’s shed the boy racer image for a more exclusive design he calls “Angulár”. It’s been a busy time of late for Taylor and his brand, “We bought land in down town Fayetteville, AR to build the first One-Up Moto Café which is set to open mid-2018. Alongside that we also acquired a few acres just outside of town to build a dream shop for the growing brand. With all of this development we’re still trying to meet my goal of finishing two contracts every 6 months. We’re about to have our 3rd One-Up Moto Show to be held during the Bikes Blues and BBQ festival in our home town at the end of September. This KTM will be featured there before being delivered to our client.” You wonder how he finds the time, but young and filled with a deep passion for motorcycles as soon as the RC was picked up Taylor was riding it night and day dialling himself in to extract its feel. “Part of that bond I create comes from studying the bike, its internal, ergonomic, and cosmetic design. This KTM is so sharp; in stock form it has almost no curved lines. The trellis design winds its way through the frame, and swing arm, so that triangles are the first and last thing you see. The name “Angulár” came naturally once I connected with the bike.” The RC is also an incredibly light machine, tipping the scales at just 139kg from the factory, so maintaining that advantage and keeping the visuals light also played a key role. With his client standing more than 6 feet tall the idea was to create a bike that’s visual proportions made sense and was still comfortable to ride. Up on the bench the full factory fairing was removed and all the unnecessary components hiding behind them shown the door. With a rolling chassis to work with Taylor found an old Honda tank in the workshop and offered it up to the frame. With some fettling it would fit, the size large enough to meet the look he was going for and its big surfaces giving him a chance to work in more angles. Body worked to perfection it sits neatly over the KTM frame, old and new combining seamlessly to totally transform the look of the bike with just one single piece. The front features frenched in vents before it was over to paint, “the client requested blue and I love BMW metallic blue so we went with that on the base coat and let my artist Eric Snodgrass hand paint the name and details on the tank before we buried it all in clear.” At the other end of the frame a deliberately stubby look was achieved by raising the subframe’s height and shortening the length with a rounded off hoop. But to add extra detail and act as a seat support, miniaturised replication of the frames trellis pattern is designed into the tail-piece that further highlights the skill inside the four walls at One-Up. The seat itself is no off the shelf number, having ridden the bike in stock form Taylor’s main complaint was the lack of comfort. To rectify this he used an expensive dense foam and included a gel pad in the centre of the seat before the whole lot was diamond stitched in black leather. The theme of Angulár continues all the way to the very front of the bike with an asymmetric piece meshed out acting as the headlight cover. While the front fender provides another chance for trellis, triangle and mesh to combine, although given the sharp point a mess is what it would make of any pedestrian silly enough to get in this RC’s way! Even the tyres get in on the action with the Avon AV rubbers tread pattern the perfect match. “We went with a narrower rear tire because KTM oversized them from the factory, but the side wall is a little taller to help with ground clearance and give it some height,” explains Taylor of the functional reason for going with the AV54 rear. Despite the drastic visual changes the weight is as light as ever meaning the KTM retains its power to weight ratio advantage over its rivals. But that didn’t mean this single cylinder was going to leave One-Up without some more kick in the pants! The stainless exhaust sounds a treat finishing under the tail with a Lossa Engineering muffler and all the precision TIG welds are laid down in house. Then a K&N pod filter was fitted up to handle breathing duties and the new fuel tank means an external fuel pump and FPR set at 2.7 bar take care of providing the go juice. All of which is tuned by a Dyno Jet Wide Band 2 tied into the Power Commander 5 reading AFR’s from an upgraded 5 wire Bosch O2 sensor. Yes, this machine might have taken on an old school vibe but it’s still packed with all of the modern goodies and then some! That extends to the braking with the Bybre single 300mm disc with four-pot caliper utilising ABS technology for extra safety in tricky conditions. With KTM having spent years in GP racing the RC is one of the best handling learner machines money can buy, from slow speed flick-ability to mid corner prowess. That is largely a result of the WP suspension working flawlessly with the chassis, 43mm USD forks up front and a mono-shock rear. Taylor even fitted up a set of fully adjustable rearsets so his client could get dialled right in. “Usually one of our signatures is running dedicated iPhones for the dash but this bike is an exception, because the stock speedo was so compact and clean, we just fabricated a mount for it.” Which demonstrates exactly Taylor’s smarts in executing this build, taking the very best of what a huge company like KTM is able to develop and then adding the custom touches to breathe life into a dull exterior. As to which category of custom bike Angulár fits into Taylor left that for us to decide, he’s too busy building amazing bikes and the One-Up empire, and when a bike looks this good and goes that hard does it really matter if it’s Café or Tracker?