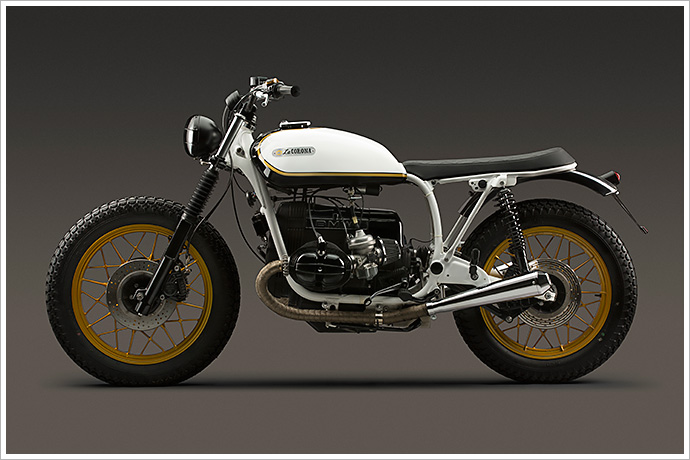 La Corona Motorcycles is one of the latest shops in Europe to be producing this stripped back street tracker look. Based in Barcelona, this is their fourth build by the four passionate Spanish builders. Each of their builds has used a different donor bike, but they all have the ‘less is more’ La Corona aesthetic to them. This time they decided to use a 1981 BMW R100RS. It’s the second incarnation of this beemer, originally being built red with black detailing. The stock bike had a sizeable complete fairing, which was the first thing to go. Their goal, like most of their builds was to build something simple and “naked” – we think they acheived this with flying colors. They changed the original handlebars in favour of some dirt track bars – which gave the bike a more comfortable riding position. The clock is made by Acewell Digital and it’s also a little on-board computer for the bike. The stock wheels were replaced with gold mesh style wheels, and covered with a fresh set of Firestone ANS Military tires; 19 x 4.0 front and 18 x 4.5 rear. The stock BMW R100RS fuel tank was also replaced with a Kawasaki kz750 tank – adding to the classic tracker styling they were looking for. The electrical wiring was also replaced and simplified. The battery is a gel battery with case was relocated under the engine. They also added a scrambler style headlight and rear light. La Corona removed the stock air filters and case, and a new cover was constructed that flows better with the lines of the bike and it’s engine – they are planning to sell this case cover soon through our website.

Overall, they have created another beautiful naked tracker that has La Corona written all over it – particularly on the tank. As the boys from Barcelona said “we are very proud of this great bike.” And so they should be.