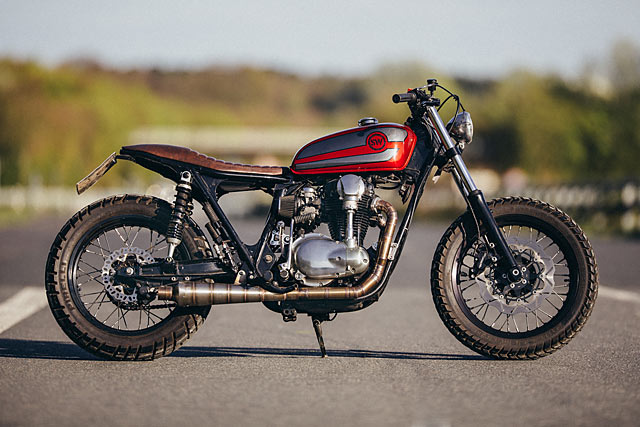 Nitrous oxide. Turbos. Superchargers. We’re as guilty as the next guy and or gal for drooling over flashy go-faster parts that make good headlines and get those website clicks a-clicking. But there’s a much more traditional approach to speed that doesn’t involve mega bucks and a team of rocket scientists. It’s what bikers have done since the dawn of time. Drop weight, increase capacity and work on the heads. And for Schlachtwerk’s Tommy Thöring, it’s just this approach that turned out this little gem. Meet his Kawasaki W740 he calls ‘No Fat’. This is Tommy’s first attempt at a W650, and it’s one that happened more organically than you may expect. That’s because Tom was both making the bike for himself and because he’d committed to build something that was lighter than light. As he was after an everyday ride, he’d set his mind on something tracker-ish that would take pretty much zero effort to bomb around on Frankfurt’s crowded city streets. “I bought the bike at the end of the summer in 2011, after selling my Ducati Hypermotard S. After a short trial period, I realised that i’d waited far too long to make the purchase. The bike was pretty much perfect for me: the size, the look, the character. Add it all together and it was a really great package. But I still wanted to make it lighter.”

The W740 is his personal ride, and also the one that he tries new ideas on. And aside from it being his daily bike, he sometimes will plan get-aways on it in the Swiss mountains where he spends the day riding the area’s famous, serpentine roads.

[superquote]“He sometimes will plan get-aways in the Swiss mountains, where he spends the day riding the area’s famous, serpentine roads.[/superquote]

“The build was a long-term process. It took maybe three years of slow, considered evolution. To start with, I changed the rims, exhaust and the fenders. After living with those mods for a while, I updated the seat an added a new exhaust. Lastly, I exchanged the tank for a Kawasaki z200 unit.” And that’s just the big-ticket items. Now for the specifics. The Kawasaki has bespoke CNC machined triples with a new set of LSL ‘bars, a Magura HC1 brake cylinder and a Suzuki DRZ400 clutch lever. There’s also the ubiquitous Motogadget Mini speedo.

Up front, there’s stock forks but with new Wilbers springs inside. And to match, there’s also a new set of custom Wilbers rear shocks. The front hub is stock and has been laced to a 2.5 x 8″ rim shod with a 110/80 18 Pirelli KT60 tyre that’s undergone a tubeless conversion. Tommy calls the headlight a ‘Japanese-style’ unit. In the back, there’s new rear indicators behind the shocks and an 18mm brake light integrated into the freshly cleaned frame. The seat is Schlachtwerk’s own, and was made using a carbon fibre plate. A tray underneath holds all the electrics and the battery. And while the rear swinger is an uber light Kawasaki KFX400 unit, pretty much everything else here is from the house of KTM. This includes the brake and hub. Attached to it is a 4.25 x 18″ rim with a 150/70 18 Pirelli MT90.

The increased capacity, 740cc engine with ported head now spits out a dyno-proven 65HP and has been treated to new K&N filters and a pro carb re-jetting. And let’s not forget the tracker’s house-made 2-into-1 exhaust system, which no doubt helps things along. More weight was saved with the removal of the starter components, a modified rotor and no more engine sound insulation.

Tommy noted there were a few major challenges he had to tackle during the bike’s creation. He now knows first hand just how hard it is to find a secondhand Kawasaki KFX400 swing arm in Germany. “Bloody hard,” he says. And naturally, the welds on the exhaust took a lot of time and fuss to get looking just so. But interestingly, his efforts to find the perfect footrest position which would also work with the bike’s kickstart lever was the real challenge here.

“What do I like about it?” Tommy asks rhetorically? “The look, how it rides, the fact that it’s the only one in existence, and I am proud of my work, too. This is one of the lightest bikes I have ever built, but I still have an idea to shed another 7kg.” How, you ask? “Over a few beers with a friend of mine, we hatched a plan to build the tracker a completely new frame from chromoly.” Chromoly? Finally, that BMX revival I’ve been waiting for my whole life is here. Someone call Nicole Kidman.