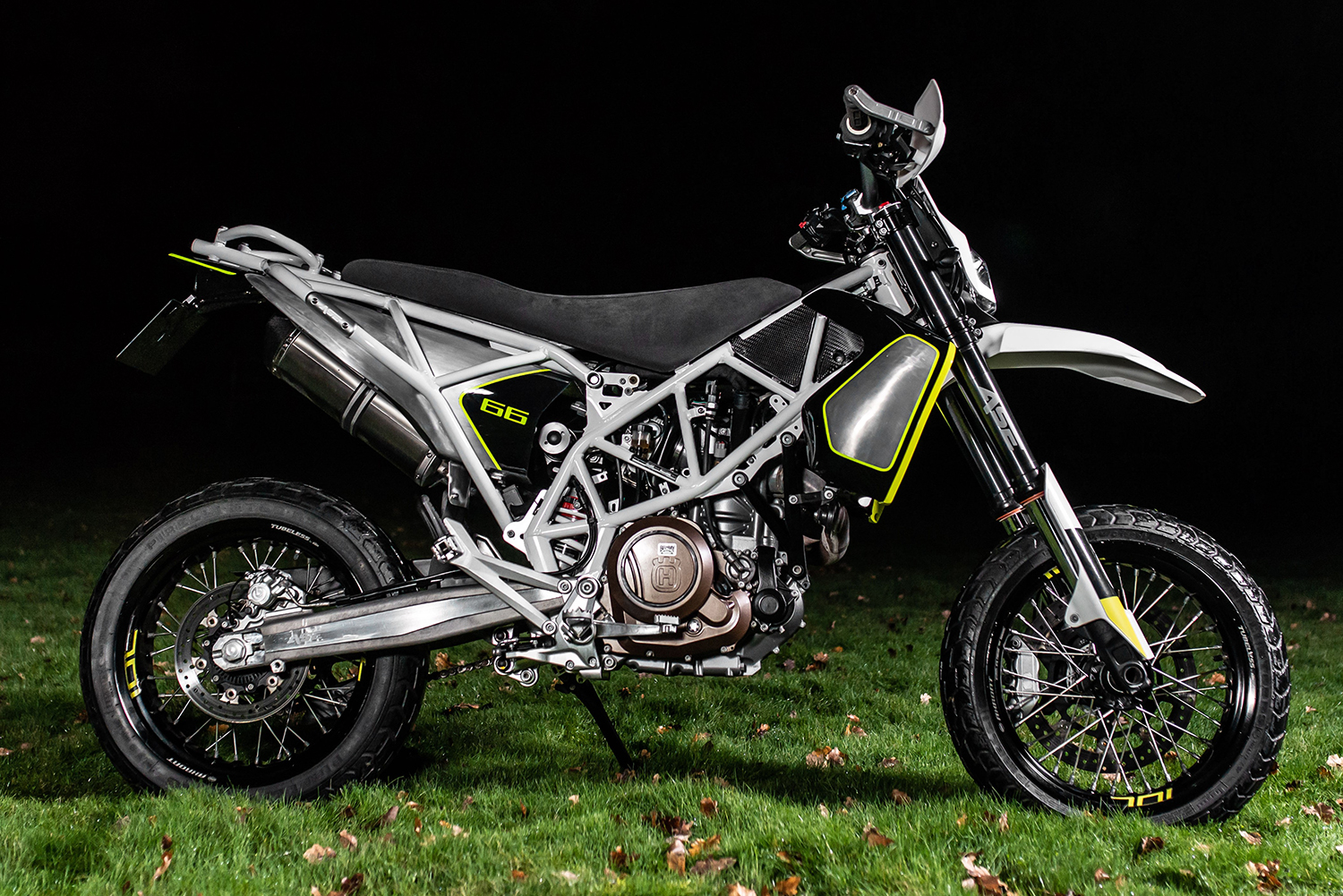 When your morning commute takes place on the crowded and chaotic streets of London, you want a bike that handles with scalpel-like precision. The only problem is the sort of bikes capable of such feats are usually Supermotos with no practicality and a common visual appearance whether you buy a KTM or a Ducati. So when a client approached Andy Steward to give his Husqvarna 701 a custom makeover and all the attributes it was missing, the man behind the UK’s ASE Custom Motorcycles was more than up to the task. Delivering a hard-charging Husky that can carry two-up, sit on the back wheel or look trick just standing still.

Like many of us Andy’s motorcycle journey started on the back of his Dad’s bike before progressing onto his own. Riding and tinkering with a Montessa 242 trials only fuelled the passion and after leaving school he undertook a degree in Motorsport Engineering & Design before performing several engineering design and project management roles over an eleven year period for prestigious automotive brands such as Jaguar Landrover & Aston Martin based in the West Midlands, UK. Then just over two years ago ASE was born, to bring to life bespoke custom bikes.

When the Husky was brought into the shop it was out with the hose to remove the grime from London’s roads and then a design brief was drawn up with the owner. “Reliable use as a city commuter, weekend adventurer and being capable of carrying a pillion comfortably (including grab handles). Key styling features such as a tubular rear frame, aluminium fuel tank and Alcantara seat cover were also a priority. Obviously, the concepts evolved as we went along and it was always a balance of where we were going with the style of the bike whilst still maintaining the practicality, reliability and style,” Andy told us.

With the 701 up on the lift and stripped down the first task to tackle was a new subframe. A common change on most custom bikes, but the Husky comes with a composite unit that includes a self-supporting fuel tank. So the processing was a hell of a lot more than simply bending up some new tube. To start the process Andy crafted the foundation of the new piece, retaining the factory seating position and the ability to run the standard muffler. “We added removable grab-rails (swappable with a back rack for those weekend adventures) and incorporated a provision to secure a frame slider on the right-hand side (swappable to the billet aluminium plaque).”

Then it was time for the fuel tank itself and having to design and build it into the free space available, proved to be a labour-intensive task. Some twenty separate pieces were painstakingly shaped and welded. Before CNC’d flanges were incorporated into the sheet material to maintain all of the existing functionality of mounting the fuel pump, sender, gauge, breather and filler neck. Using his engineering skill Andy ensured the “mounting strategy allowed us to achieve this whilst being able to safely mechanically isolate and dampen it from the surrounding framework.” The whole piece appears to float within the frame and is a stunning achievement.

To complement the new tank, handcrafted aluminium features in the form of side cowls cover the radiator and a new rear fender to capture the muck off the tyre. Not only functional, the pieces that were shaped on an English wheel add some nice curves to the trellis frame that dominates the bike. Additional panels were made from carbon fibre before the gloss black and day-glow yellow paint was laid down. “It also pays homage to the older Husqvarna scramblers of the 70s which had the aluminium ‘window’ in the paintwork.”

Having removed the airbox section from the rear of the bike to allow for better fuel capacity, a DNA filter has been fitted above the engine. The bike had come to Andy with a Dynojet power commander and now re-tuned gives the thumping injected single the best part of 80hp. On the hot side of the engine the big exhaust pipe has a menacing presence, but protected by carbon fibre shielding is no threat to the rider. A re-wire now places the loom into the old space previously used by the airbox and a new battery location with carbon fibre covers hides the battery.

“The seat base was modified from standard to suit the new design of the bike and new seat foam was sculpted to meet the brief for more comfort for rider and pillion. We covered this in Charcoal grey Alcantara with contrast yellow stitching to tie into the other highlights on the bike.” The clever work continues with the wiring for the rear LED indicators run through the frame for a fully integrated fit. The front end is just as neat with the stark white paint illuminated by the yellow from the new rad covers. Classy, lethal and very London it’s easy to see why the owner calls it Archy, like the gangster from Guy Ritchie’s RocknRolla, you’ve been warned my son.