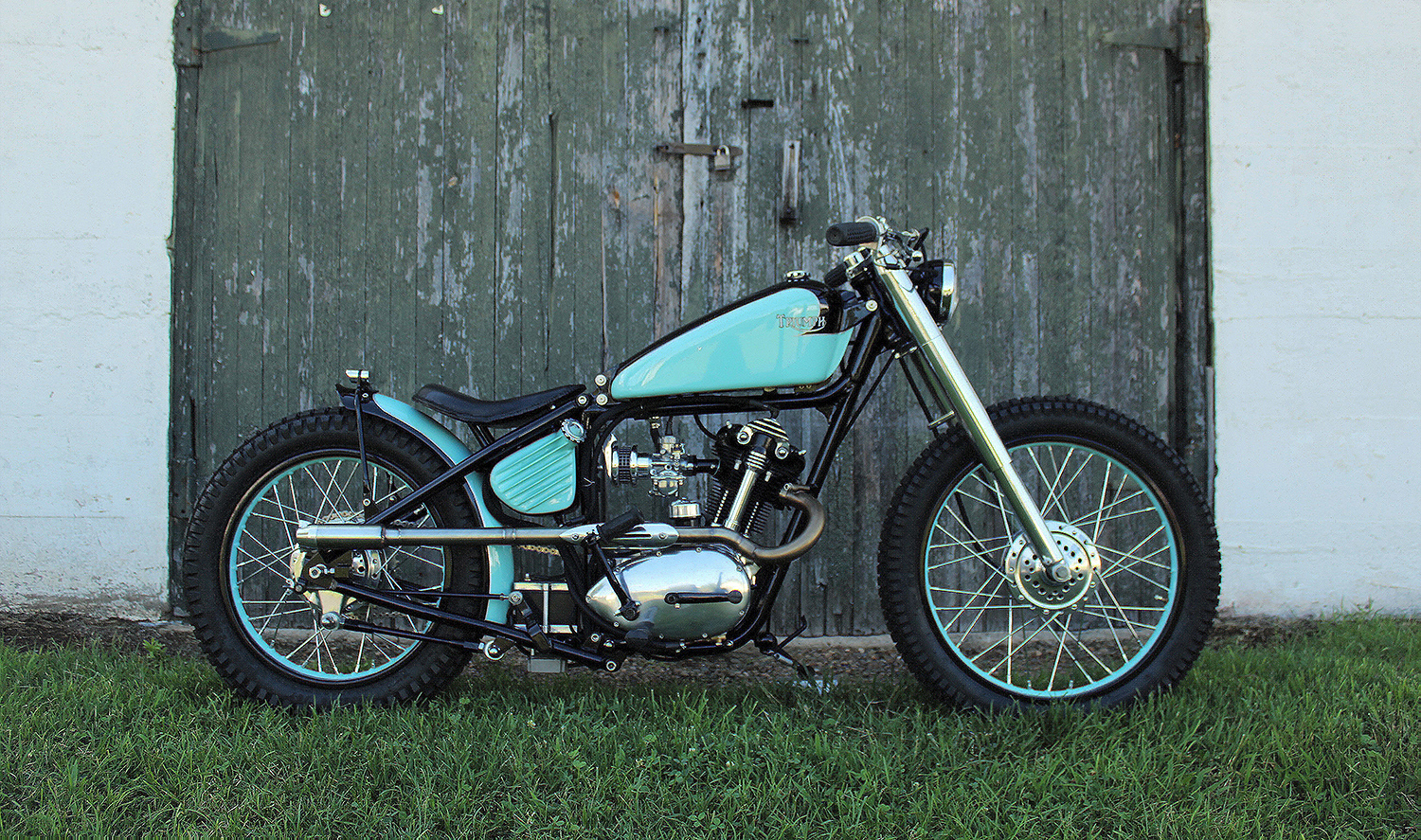 As the clouds roll in and blanket the stunning Appalachian mountains, the beauty and mystical majesty of this natural wonder belies the fortitude required to call this place home. Here hard work is a way of life, nobody else can make it easy for you and forged in that furnace of survival comes some of the most talented and multi-skilled people you’ll ever meet. On a back street in the small town of Grottoes, Virginia, you’ll find the LC Fabrications workshop and owner Jeremy Cupp who embodies the ethos of his surrounds. But when the world class builder sent us images of the latest build to roll out of LC Fab, there was a surprise. This gorgeous Triumph Cub bobber was in fact built by his 15 year old daughter Emmi and she calls her incredible creation ‘Aunt Tiny’.

Jeremy tells us how it all started, “I’d gone to a friends house to look at a BSA engine he had for sale. Amidst his collection of cars, steam engines, and electrical oddities was a handful of old British junk. I spotted the little cub sitting in the corner and my daughter Emmi immediately came to mind. We have a small collection of vintage dirtbikes at our house which the kids use to shred my yard on a regular basis. Emmi said to me only days before that ‘I wish Triumph made a tiny motorcycle that I can ride’, my friend and I struck a deal and the little cub went into my truck.”

Of Jeremy’s kids, lil Emmi has always shown the most interest in his work, regularly spending time at the shop, helping out and always full of questions. The assumption always was that the Cub, a Christmas gift, would be fixed up and added to the collection of backyard beasts. But Emmi had other ideas, within days she’d already sketched up a few designs and the first thing she wanted gone was the swingarm, “that’s my girl” Jeremy smiles. “So we spent a little time learning to bend up some tube, and I did the welding. Afterwards, she asked if I’d teach her to TIG, so I did. Within an hour or so she had it like she was born to, so I let her do all of the welding from then on.”

With the stock front end and wheel not up to scratch, Jeremy went digging in his shed and came out with a setup from a 1980 Yamaha MX100. But you can’t just bolt an ’80s Japanese front to ’58 Brit, “So Emmi made her sketches and I gave her a crash course in using Fusion 360 to model them, as well as a lesson in FeatureCAM to write the majority of the program. The wheels were disassembled and powder-coated, I used the front one as a teaching tool, and she laced the rear one herself.” At this point, I’m wishing Emmi lived in Australia so she could help me build my Matchless!

Next up was the fuel and oil tank, with them to be made from scratch you’d assume that gun builder Jeremy would take over from here. But you’d be wrong, staying true to Emmi’s sketches they made the cardboard profiles, built some wooden bucks and with a quick lesson complete she was beating sheet metal with a hammer into shape. Jeremy did the small fine tuning and that’s how the fab would proceed, a few questions asked, a quick lesson and Emmi was making the parts, welding, cutting and grinding, as well as doing simpler pieces on the manual mill and lathe. There are seasoned builders with trophies in their cabinets that can’t do this.

With everything made, the frame and small parts were off to DefenseCoat in Richmond for a shiny dusting of hard-wearing powder, while back at the shop it was time to paint. “Although not her favourite step of the process Emmi learned bodywork, and while I was the one to ultimately squeeze the trigger on the paint gun, she did all of the layout and even did the striping and lettering herself,” Jeremy explains. Having already learned some leatherwork at school and with her own side job selling wallets and other pieces on Etsy (@shopgirljewlery) the seat was a breeze. The design was drawn, leather carved and then beautifully pieced together with her Speedy Stitcher.

On a roll and the little Cub engine was pulled apart, here they found the first major hurdle of the build. The single-cylinder engine was basically shot, with only the cases not needing a fix or total replacement. With COVID in full effect and parts having to come from England, Emmi had time on her hands. So, “she decided to sand polish everything, and so I’d take her home at the end of every day looking like a chimney sweep. She also learned pretty quickly that all of those parts cost plenty of money, so she started working for me, running production on the CNC to cover the cost.” With a new carb and stunning exhaust, the engine now runs as good as it looks, long surpassing anything that rolled out of the Triumph factory.

With the engine in the frame, it now had to all be wired up, so Jeremy drew up a diagram, gave a quick lesson on how to solder and once again Emmi was away, making one of the most frustrating parts of bike building look easy and leaving Dad to simply watch on from a stool.

By now word was spreading across the internet of a new star builder at the LC shop and Emmi was invited to show her bike at Fuel Cleveland, took out 3rd place in the Roland Sands Design “Coronavirus Bike Build-Off” and we hope scores her an invite to the Handbuilt Motorcycle Show! Emmi’s already keen to take over the shop and will join Jeremy in crafting the shops next full build.

He’s always hoped that one day the right young person might come along, keen to learn the trade and showing the immense talent required to join him at the top of the game under the LC Fab banner.

Turns out, that superstar builder was with him all along, soaking up the information and blessed with a gift from God to turn her ideas and simple metal into a breathtaking bobber in just her very first attempt. In a year that’s challenged us all, we can be grateful that the future of this passion we share for building bikes is in good hands and all that’s left to do is sit back and enjoy the photos of this epic build.

They say after all, that a picture is worth a thousand words and these gorgeous shots were taken by Jeremy’s oldest daughter Harleigh (@HC_photography), the official LC Fab photographer and web designer. Jeremy is rightfully proud and this is one hell of a family.