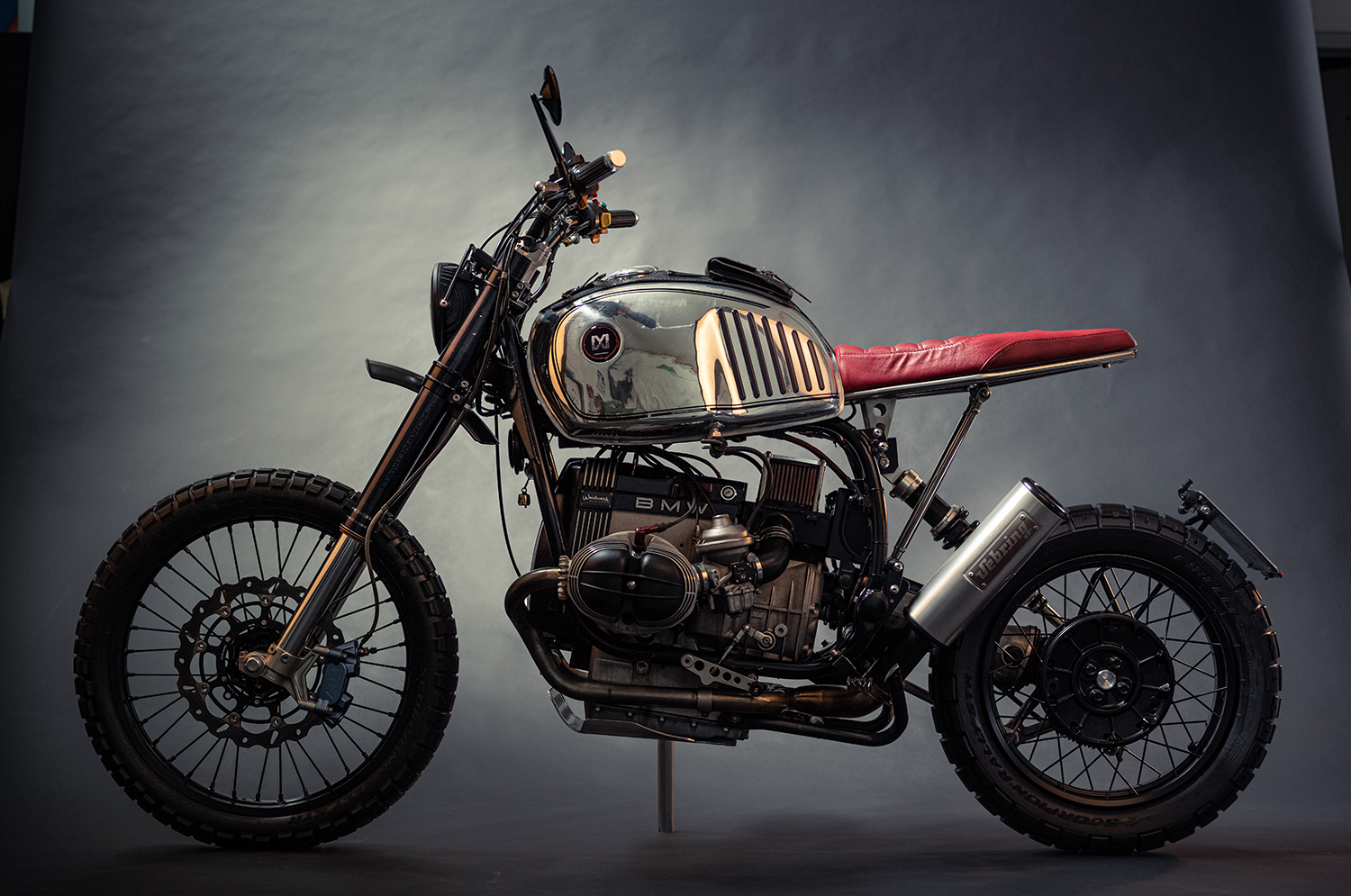 The life and death of a young flamboyant King in the 19th century; with the backdrop of war and scandal, set amongst palaces of architectural wonder and resonating to the bellows of Wagner… if you can’t find inspiration here, you can’t find it anywhere! Thankfully Ralf Eggl is not only a master mechanic but like any true renaissance man, a scholar of the history that weeps from the thick forests into his Bavarian home. So when a man known as ‘The Moped Monarch’ arrived at his Woidwerk stables on a BMW R100GS needing a refresh. Ralf knew he couldn’t send him away until his steed was once again fit for a King. Upon completion, it was formerly christened, Ralf showered in gold for his tremendous toil and the readers of Pipeburn invited to the official unveiling.

You see as our mechanic in Germany will tell you, this is as much a true story as it is a fable for your fulfillment. “The King of Bavaria, Ludwig the Second, committed suicide in the Würmsee. But did that really happen? There are numerous rumors and doubts about this story.” In fact, the autopsy revealed no water in the lungs of the young ruler who had supposedly drowned in the stunning lake in 1886. So with the arrival at his door of the ‘The Moped Monarch’, claiming to be modern-day advertising guru Thomas Schwarz, Ralf wisely assumed the King had returned and gave him shelter until his new ride was complete.

With the Monarch already in possession of a Laverda 1000 for sprint work and BMW R1150GS for the open roads, it was clear the smaller GS would be his off-road warrior. The R100GS comes from a time when big off-roaders, inspired by the Paris-Dakar were the thing to have. But suspension technology has come a hell of a long way and Ralf wanted to treat the King just so. To do it right the bare chassis went up on the bench and a set of Husaberg FE650 forks were swung from the neck. Reworked to suit the BMW they now offer 275mm of travel and sport stunning black anodised triples and legs.

To match an FTE radial caliper was mounted to the lower and grabs hard on the single 310mm wave-pattern disc. The power is sent down braided lines from the custom CNC machined fluid reservoir and gives excellent stopping power in all conditions. At the rear, the paralever swingarm containing the shaft drive was overhauled and then a call was placed to suspension giants Wilbers who sent over a shock fit for a sovereign. To get it all rolling Ralf then relaced the wheels with a black on black finish and wrapped them up in the hardcore adventure Scorpion Rally tyres from Pirelli.

Now attention could be turned to the styling and this had been given the highest priority on the build. And what is a bike for a King without one hell of a throne, “In order to achieve a high seating position, a complete stainless steel rear frame with an integrated LED rear light was made. This is supported with two V-shaped, uniball-mounted stainless steel struts,” Ralf explains. All of which is topped off with a glorious seat made from real leather, the red hue a combination of perforated and solid material that is expertly stitched. More leather adorns the tank, with a custom pouch, but not is all as it seems.

That tank is not an original, nor is it a BMW item taken from another model. Instead, Ralf with the ruler’s design input fabricated a stunning all alloy tank that takes its inspiration from earlier mono lever models, without adding any of their weight. What is added however is a set of brilliant badges made especially for the task. But the special touches don’t stop there, the Koso LED headlight sits on hand fabricated mounts with the word ‘Monarch’ etched between the beams. With a small high mount fender sitting below and rear duties falling to the number plate on a custom holder.

Ralf being the man he is was never going to leave the engine standard and first protected the lovely lump with an alloy bash plate. Then the boxer twin was treated to some dress up, a mix of black and restored raw cases with the addition of round rocker covers for more of a classic look. Next, the airbox cover was tossed aside and with input from the creative crown, together they came up with a slick custom setup that illuminates red with LEDs to match the seat above. Finally, “for the correct acoustic presence, a muffler from Mr. Sebring was installed in an aggressive and ready-to-fire position.”

Then it was down to the little touches and no corner can be cut when ensuring a motorcycle is road legal in Germany. A handmade battery holder keeps the JMT lithium unit safe, while Motogadget supplied the m.Blaze disc and pin indicators for the front and rear respectively. The original instruments haven’t aged well and doing the job in a tiny package is the full display Acewell speedo.

While completing the build is a set of Highsider mirrors to keep an eye on any would-be assassins. We may never know what happened to the boy King all those years ago, but as Ralf tells it, this sovereign story has a much happier ending. “After a few months in the Kini’s bondage, the masterpiece with the name “Dirty Kini” was happily handed over to the “Moped Monarch”!