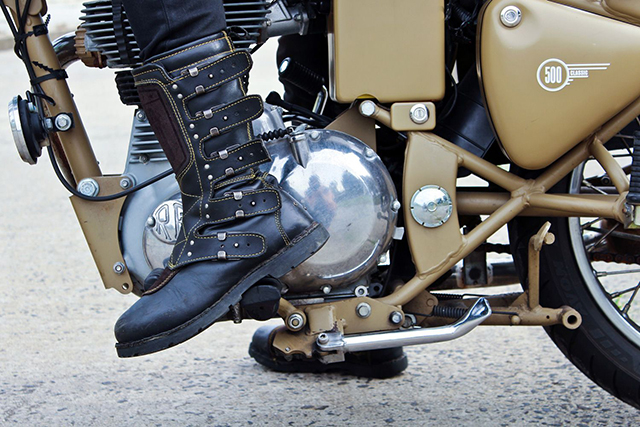 Of all the items of motorcycle apparel available, I find it hardest to get excited about boots. Jackets? Easy. Gloves? There’s a dozen pairs I want at the moment. There’s even a good variety of Kevlar jeans that don’t look like they’re designed for my Gran. But protective motorcycle boots usually look like a cyborg’s leg sprouting tumours – with lurid bits of plastic and obnoxious logos hanging off at all angles. And for a long time boots like these were the only real option if you wanted to protect your feet and ankles. But then there’s the Icon Elsinore 1000. Modelled after motocross boots of the 1970’s, the Elsinore 1000 tries to combine traditional styling with modern safety features. I think they look fantastic, but if you think that they look like ridiculous steampunk accessories there’s no helping you – you’re probably not the target market for the Elsinore’s anyway. But if you like the look of them, you should seriously consider buying a pair. Here’s why. At first glance it’s easy to assume the boots are just a styling exercise aimed at the undernourished inner city hipster set rather than legitimately protective boots. But as soon as you pull them out of the box you’ll realize that they’re solid, well-made units. They have full grain leather uppers and the sole is replaceable. The sole also has a steel shank running through it, it has malleolus protectors, a hard plastic shin guard with its thick leather the whole thing just has a sturdy kind of feel to it. This continues when you strap them on – getting your feet in is easy enough using the zipper (the buckles are just there for adjustment, you ‘set and forget’ them) but when you’re all zipped up they firmly lock your feet and ankles into place. Which is great, because it’ll prevent twist and rotation during an accident and bad – because it’ll make you walk a little like you’ve got an acquired brain injury. To be fair they are comfortable enough to stroll around in, but the protection offered by the heft and stiffness of the boots means that extended walks can be a clumsy experience. But for the majority of the time I’ve worn them on the bike they’ve been incredibly comfortable. They offer good feel on the controls and have great grip when putting your feet down. But it’s important to realize that they’re not an all-weather boot – they might hold off rain for a little while but in a heavy downpour they’ll become soaked through pretty quickly. But if you’re riding in that kind of weather it’s probably time to give up any plans of looking good and break out the Gore-Tex marshmallow man suit and lined boots anyway. One thing potential buyers should be aware of when looking at the Elsinore 1000’s is the bulky cut of the toe box, which means that some riders might have problems using the shifter on a bike. I’ve had no problems on my Bonneville, or on a W650, DR650 or a host of other bikes I’ve ridden while owning the boots. But on the Royal Enfield Bullet I’m unable to get my foot underneath the shifter to change up a gear – I’m forced to use the outside edge of the sole to pick at the lever. Sometimes it works (praise Jesus!) and sometimes it doesn’t. This offers something different to worry about when riding a Royal Enfield – a welcome change from the worry of a catastrophic gearbox explosion or terminal piston separation. So if you ride a Royal Enfield save yourself $245USD and put the money towards quality fasteners, a proper chain and sprockets or psychotherapy. As well made as Elsinore 1000’s are mine haven’t been perfect. There’s a metal cap on the heel of the boot secured by four screws. In my first week of owning the boot one of these tiny countersunk screws made a jump for it somewhere between Melbourne and Sydney. I wrote Icon an email asking for a replacement and a customer service representative said sure, just send us a self-addressed envelope and we’ll mail you off a replacement. No. It’s a 2 cent part and it’s fallen out in the first week of ownership. Just send me a new one, mmmk? In the scheme of things this is pedantry and I think this is an exception to the experience that most customers have had with the Portland-based Icon. There’s a few stories floating around on the internet about early production Elsinore’s that had the buckles break within a few weeks of ownership. And that’s a huge problem – but to Icon’s credit they went out of their way to track down every customer affected by the defects and replaced the boots for them. That’s nice. I’ve had my Elsinore 1000’s for 18 months of constant commuting and touring across all kinds of terrain and through all kinds of weather. They’ve held up better than any other boot I’ve owned and with a bit of wear and tear on them now I think they look even better than the day I bought them. They’re really comfortable on the bike and in the event of a spill I’ve got no doubts they’ll go a long way towards protecting my feet and ankles. If you’re looking for a good pair of motorcycle boots and if you think they look more On Any Sunday than Wild Wild West, I can’t recommend the Icon Elsinore 1000’s enough.

[In the interest of being transparent, ICON is a sponsor of Pipeburn. On this occasion the reviewer purchased the boots using his own hard earned clams. We have been sent the new ICON 1000 Prep boots and will do a review as soon as we have done enough milage in them.]