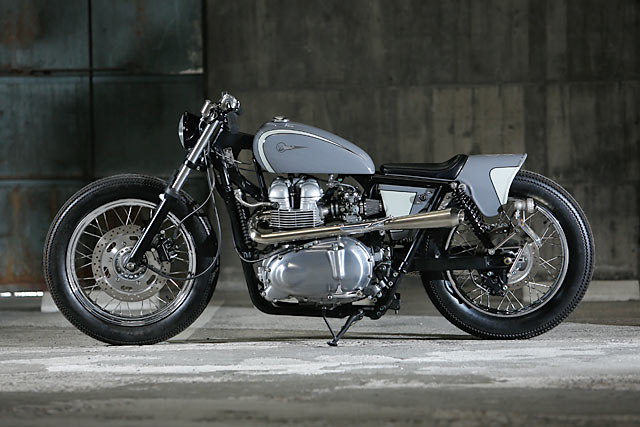 The British can rightly lay claim to being the birth place of the cafe racer, the Americans the bobber, but while there is no singular name to describe the style of the incredible custom creations that roll out of Japan; you’re in no doubt when you see one. A true master of the Japanese scene is Kengo Kimura, who embodies everything that is mind-blowing about the machines that appear from nondescript industrial buildings that dot the country’s cities. His company, Heiwa, operates from just such a workshop, near the port of Hiroshima where his small team craft beautiful vintage machines they’re proud to ride daily. Now he’s throwing his full skill set at a modern motorcycle, a 2003 Triumph Bonneville that he simply calls 002, we call it perfection. Kimura-san started his motorcycle journey at an early age and graduated to a dealership that sold run of the mill new motorcycles. But this was never going to be the sort of day job he could survive in and his affinity for vintage machines soon had him founding Heiwa in 2005. This Bonneville is proof positive he’s not averse to working on newer bikes, but his custom classics are without doubt some of the best in the world. Looking around his workshop is a step back in time, old oil cans, greasy wooden work benches and even the furniture looks like it’s from the ’70s. So it should come as no surprise then that even when Heiwa do put their collective genius into a modern bike it still gets that vintage touch. Starting life as a 2003 Bonneville however means that the platform remains relatively simple, air-cooled, twin carbs, classic fundamentals; it makes it the perfect candidate for a reliable runner with the unmistakable Kimura-san style. His designs are all in his mind so there is no Photoshop here, just all hands on deck to strip the Bonnie down and visualise the next step. The first was to simplify the subframe, slimming the bike down, cutting off the passenger foot pegs and ditching all the metal past the shock mounts. The narrow profile is part of the Heiwa style and is more than just a look, but also part of making each build more useable on the traffic bound Hiroshima streets. The gas tank might share some traditional Bonneville lines but it’s a totally one-off unit built-in house, its smaller dimensions allowing it to sit further back on the frame and low down resting just over the engine. The side panels were next on the list and while they appear to be rudimentary at first they’re as impressive as any other feature. No matter how close you zoom in on the pictures the gaps to the frame are flawless, the metal crisp and clean; while also serving as home to the relocated ignition and switch gear. But if the sides show off elementary excellence that takes years to truly master, the tail-piece leaves no doubt as to the level of natural talent Kimura-san possesses. It was his most challenging task of the build and yet given the prolific nature of the Heiwa shop you get the feeling he swats away such difficulties in a manner we mere mortals can only dream about. Keeping the proportions just right was the main concern, too big and it would dominant the look rather than accentuate the back tyres natural curves that flow like a rolling sea from the front of the tank rearwards. The subtle beauty of this metal working master is complimented by the colour palette that simply allows each piece to shine. Not afraid to use crazy colours, Heiwa decided however that this bike was best suited by the palest of blues with cream accents. The two are separated by straight line pinstriping in black while that incredible tail-piece gets some Hot Rod touches in white. It’s almost impossible to hold back on the superlatives, as even though the seat is a classic black leather item, the stitching and fit is flawless, just like its design. While it looks stock on the outside the suspension has been heavily modified to provide a total height drop of 70mm. The front suspension takes the factory 41mm telescopic forks and with a new set of internals takes the drop without simply lowering them through the trees. Out back a custom set of short shocks are adjustable for rebound and have been fitted with a set of progressive rate springs. Such a substantial ride height reduction required the side stand support to be cut off and re-welded to the frame to prevent the Bonnie toppling over when parked up. Adding to the visual drama of the body drop is a taller rear tyre and both ends getting an aspect ratio increase for that big rubber feel. The front end stays at 19 inches with a light weight polished rim laced to stainless spokes and fitted up with a Duro Classic tyre. The rear increases an inch over stock to an 18″ rim and with the increased aspect ratio pushes the limits of the stock swingarms space closer to the pivot point. Also out back is the custom number plate support with a hand painted plate done in-house especially for the build. When we spoke to Kengo he hadn’t yet fired the engine but it hasn’t been left untouched in the quest for Triumph Bonneville bliss. The motor and side covers receive a spruce up thanks to an all new paint job with the particular silver chosen giving it a more vintage vibe. The 36mm stock carbs are still in place but a rebuild, polish and a nice set of pod filters breathes new life into them as they do the engine. While the exhaust is straight from the Heiwa bag of tricks, individual pipes that run directly rearward, shielded to prevent scorched legs and finished with trick-looking slash cut reverse cone mufflers. [superquote]“There is little doubt that Kimura-san will collect an impressive pile of trophies with the Bonneville 002”.[/superquote]

To finish it all out a set of flipped bars keep things simple and Triumph’s the controls are all about being rider friendly without disturbing the overall look. A classic black headlight illuminates the back streets around the industrial port while one of Heiwa’s own vintage tail lights was the perfect final piece. There is little doubt that Kimura-san will collect an impressive pile of trophies with the bobbed Bonneville 002. But what makes him so special and the Japanese custom scene so easy to fall in love with is that despite the show quality of their builds, they ride their bikes every day, as hard as the things will go. Maybe that’s their style after all, bespoke, beautiful and bad ass!