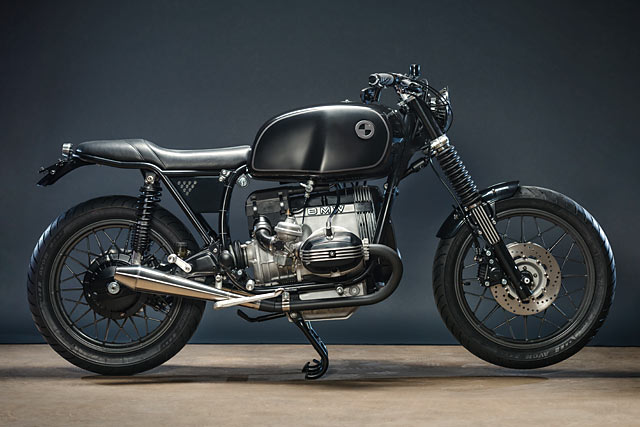 It will come as no surprise to Pipeburn readers, the general public or even your garden-variety buddhist hermit that there’s a real flood of ‘70s-era BMW customs at the moment. Hell, there might even be more of them than Kardashians; but I digress. It’s clearly a trend that has jumped the shark; more often than not we’re politely declining them en masse. And with so many floating around, it’s easy to get jaded. Or so we thought until we saw this, the latest BMW build from northern Chicago’s Analog Motorcycles. It’s a stark testament to the fact that no matter how loud the background noise is, quality work and classic looks never grow old. “I founded Analog Motorcycles in ‘08 out of passion, principal and necessity,” says Tony Proust, Analog’s owner. “My approach to design is simple. ‘Lighten it up, clean it up, and fire it up.’ But to realise this, it takes real time and dedication on every build, making the planning and design phase one of the most important steps in the process.” It takes a deft hand with customers, too. As anyone who’s tried will know, it’s almost impossible to make something great when the key protagonists are on different pages. Speaking of customers, this one contacted Analog a year or so ago, wanting a custom build. Initially he was after something similar to the shop’s XS650 Agnessa, built in 2015 and featured on these very pages. “We sorted out some details and scheduled the build in. In the meantime, he decided he would rather have a tracker-ish BMW airhead, which we thought was a better choice. Then, just before the build was about to start, he purchased a new BMW M3 in a Black Sapphire metallic which he was really in love with.” Some guys have all the luck, don’t they? And no, you don’t win a prize for guessing what happened next. “Apart from the end product looking similar to his new car, his only other request was that it be a classy build and that it should allow for two-up riding.” Of course, a lesser shop may have taken this whole BMW M3 brief a little too seriously and ended up with a tacky monstrosity… but not Tony. Sign of a true automotive designer? We think so. The bike was sourced using the good old ‘six degrees’ network. “A friend of a friend’s dad was selling his ‘82 BMW R100RT, and it just so happened to be exactly what the customer wanted.” Serendipity, much? Those motorcycling gods do work in pleasantly mysterious ways, don’t they? The list of goodies poured into the bike is as extensive as it is expensive. It’s also flush with bespoke parts made in house and sold under the ‘Analog Moto Goods’ or AMG moniker. Firstly the rear sub-frame was swapped out and the power plant’s top end was refreshed. Then vintage Koni shocks were then added at the back, along with new valves and a full front fork service for the stock shocks. A Denali M7 LED headlight was mounted in front of the new Renthal bars, Magura master cylinder, Motone switches and the Koso EX-02s speedo. A host of Motogadget goodies followed, along with a custom-made battery box. The finishing touches included a pair of Avon Road Riders, fresh upholstery to match the M3’s interior, and a full AMG exhaust kit.

As you’d expect, the bike’s ‘M3’ look was Tony’s main ‘laying awake at night’ challenge. “We tried very hard to work the design of the BMW car into the build. If you look at the BMW M3 Competition Package, it really does work quite well side-by-side. So the most difficult part of the build was not a technical one, but rather making the bike seem like it complimented the car and yet also allowing it to stand on its own design merits.” “We are very pleased with how it turned out,” says Tony, excitedly. “It has a lot of subtle details and it’s as classy as a collectible BMW should be. Now we are just waiting for the winter weather to break so we can get out to test and tune it.” We’ve heard bad things about Illinois winters. But we’re guessing that being locked up in cold garage all day wouldn’t be a bad thing if you had this BMW tracker to keep you company. Not at all.