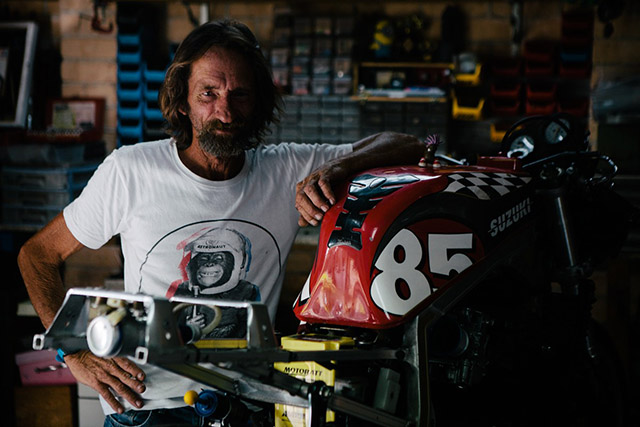 If you cut Mick, we do not doubt that he would bleed oil. Bikes, racing, wrenching – he’s done it all and continues to do so. It’s a passion he shared with his son Josh, who the motorcycle community sadly lost in 2015, but the wheels still spin as Mick builds and rides in his honour.

Mick’s been riding since he was around 10 years old, after his father got him a Honda QA50 Mini bike to learn on. It was from here that Mick would also go to Castlereagh and Nepean short circuit tracks to watch his older cousin race. Mick naturally fell in love with motorbikes, and hanging off them sideways. “My Dad used to ride as well, he had a Matchless BSA and an Austin A7 single seat car – which I wish he bloody kept! He used to ride around with his brothers and army buddies.” A skillful hand at just about everything he touches, Mick’s a traditional signwriter by trade, a house painter, and a spray painter. “I build bikes, spray furniture, bikes, cars and make dioramas. I fix all sorts of stuff; I’m a Dad, that’s our job! I’ve been doing shit in garages my whole life, and I’m 58 now.” It would be only natural that the love for two wheels would be passed down to Mick’s Son, Josh. However in 2015 while on a ride with his Dad, we tragically lost Josh in an accident. This echoed throughout the Sydney motorcycle community, particularly the Café Racer scene which Josh had gotten Mick into. “Josh got me into the Café Racer scene back in 2013. Out first bike was his ’79 Kawasaki K500 which was a bike I also owned when I was young; and it was featured at Throttle Roll 2013. The next bike we built together was his Suzuki GSX750, we did that one like a Castrol 6hr bike. Another we’ve done is the little Kawasaki KZ400 ’75 model, The Green Wasp. I’m in the garage most days on an average 8-10 hours per day or night. It keeps me sane, and the house clean. My wife Joe has a Maltese background, which means she’s a Maltese cleaning freak! I love her and my daughter Ashleigh for letting me do all this.” One of Mick’s current bikes he’s running is his Silver 1984 Suzuki Katana 750 GSXSE with the pop-up headlight, in pure 80’s fashion. He’d originally owned a white model some years back, but had a stack on it riding with mates for the Junee Poker Run. “The bike was in a bad way and needed some serious repairs, it’s currently sitting in my garage in various milk crates. My wife jumped online and found the silver one for me after researching spare fairings and parts on the net. Some guy up the north coast was selling it, and I absolutely loved it. Why? Because it still looks as good and tough as it did back when I first saw it at the 1983-84 bike show. I had to have one back then, but I got married and it was put on the back burner.” It actually took Mick 15 years after getting married to get back into the bike game, but it was something he took to passionately and with ease. “I’d bought a 1968 Harley-Davidson Police Special, I’d done it up but was never happy with it. It was after I sold that when I bought my first Katana. I love the Katana, I like the way it fits me and I fit it. The way it goes, looks and the comments it gets. The burnouts it can do (I love that the best) it’s a tough engine. Josh wanted to put the bike in his lounge room one day. He loved how much I loved that bike.” To contrast his 1980’s crotch-rocket, Mick’s also got a ’95 Harley-Davidson Sportster 1200 he’s give a café dosage to. “I got the bike off a mate in exchange for painting his house! I changed it around with clip-ons, cut down and drilled the guards, pipe wrap to give it a more old-school look. It fits me nicely, is easy to ride and does great burnouts also! I gave it a custom paint job with some paint I was given by a mate, it’s the special great paint they use on the Sydney Harbour Bridge. I love how it looks when the sun hits the tank. I love how simple a sporty can be.  It was the bike I wanted Josh to ride, to have a bit of fun on but he unfortunately never got to ride it. After Josh’s accident, I decided to get it registered as I found riding the Katana hard after what happened on the ride with Josh and I. The weirdest thing happened when I went to register the bike. The number plate I got handed to me was MYY88, which are my initials and Josh’s year of birth. It like was josh was giving me the thumbs up! I feel him riding with me all the time.” Up on Mick’s bench sits a red Suzuki GSXR which he’d picked up about 7 years back, however somewhat accidentally. “I was bidding on a blue 83 GSX750. The day the bidding was ending I went for a ride to my mates place and told Jo to keep an eye on it on eBay. I told her not to bid more than $1k. When I got to my mates, Jo messaged saying we won the bike but she bid more on it. Her and Josh were bidding on it and got carried away, they won the bike for $1500! I was not impressed. When I got home Josh said to me “When can we paint out the black panels?” I said “Black?! I thought it was blue?” I was confused; turns out Jo had accidently bid on the wrong bike, she bid on a 85 GSXR750 by accident. I took it for a ride it went like a rocket, so I was happy.” From here the Gixxer would get pulled down and given a repaint, with the bike receiving a more race bike look with a big number 85 and checkered flags on it. “It was more in your face, the cops thought so too! I got booked a couple of times on it.” One night however Mick had a stack on the bike riding up at Mount White with his son’s best mate Craig. “I rode it home with a buckled front end and a broken left thumb. We got home around 2am that night, what a ride that was! Josh was living in London at the time, so he missed his Dad having a big one that night”. The now red Gixxer was in need of repair as it sat in Mick’s garage, awaiting for Josh’s return home to get it back on the road. “Josh had come home from London and asked if we could rebuild it for him. He owned the Z500 at the time, I said I will do up the ‘83 Suzuki GSX750ES I had for him for the road, and we will do the GSXR750 for the track and drag strip.” So Mick pulled the bike down again after a few years of it sitting in the corner of the garage. “Just last year Josh asked again “Can we rebuild it as our next project?” he wanted me to make it look like a Yoshi Suzuki, so he went about finding stuff for it. We had put the engine and front end in together; we were working on the swing arm with Darren from DNA the day before his accident.” “Now the boys and girls from Sydney Café Racers have donated $5000 for me to finish the build and Josh’s other bikes, the Kawasaki Z400 and Z500. Since then I have started to rebuild it the way Josh wanted it. It’s hard to get the right motivation to do it now that Josh is not here to see it, but everyone has been really great, helping me out so much and I’m sure he’s right here in the garage with me at night, pushing me to keep going. You’ve all inspired me to do it in his and your honour! I probably would never have let him ride it anyway… it used to make me shit my pants.”

“Josh now builds and rides with me every day, he was and still is my inspiration. Thank you from Mad Mick, Josh, Jo and Ashleigh.”