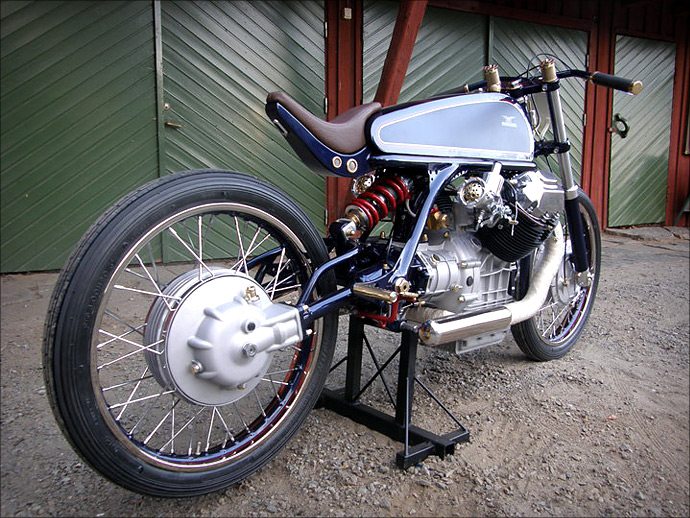 What were you doing with your life in your late teens? If you were anything like me you were flunking out of university, getting right-royally wasted, living at home and you more than likely hadn’t even considered riding a motorbike. At least, not legally. Cough. So what if I were to tell you that the creator of the amazing Moto Guzzi you see above is only a mere 20 years old and that this is in fact the third custom bike he’s built? Well, it’s with gritted teeth and a slightly awkward, jealous smile that I’d like to introduce you to Adam Nestor, creator of this Ferrari blue wonder called “Madame Guzzi”.

Hailing from Rävlanda in the southern tip of Sweden, Adam names his father Bengt as his main influence and mentor for his remarkable skills, helping Adam build his first bike (a Honda CB 125 K5) when he was 16. Thanks to his dad’s fully stocked workshop and his creative skills (he’s a carpenter by trade) we’ve all got a clutch of amazing bikes to be thankful for. Young Adam is now a qualified bike mechanic and working full time with a motorcycle company in Gothenburg; talk about a good hire. Make sure you stay tuned for more of Adam and his righteous bikes in future Pipeburn posts.

Based around the engine from a 1979 Guzzi SP1000, it won’t surprise you to learn that most of the parts for the Madame were hand-made by Adam. This includes the velocity stacks, frame, tank, bars, exhaust, and all the smaller, immaculate detailing. The only real outside help he had was on the seat – and even then it was built to his own design. Other specs include twin SU HS2 carbs, Benelli hubs, Avon Speedmaster tires, Marzocchi forks, and an Ohlins rear shock (of course). The bike was entered in numerous categories at the 2010 Västervik bike show, where it took top honors in the custom class and then landed the overall best-in-show award against a seemingly never-ending cavalcade of Harley-based choppers. See? There is a God. Best bike of 2010? The Scandinavians seem to think so. Let us know your thoughts.

P.S. A big thanks to our Swedish-speaking readers who pointed us in the right direction for this article. Tack så mycket!