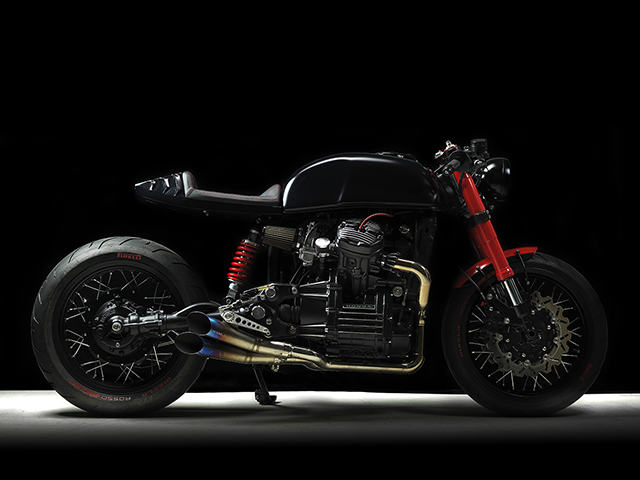 When you’re a Ford Mustang owner but all you want to do is ride around, what better way to do it than to have a matching motorcycle parked in the garage. Living in the beautiful seaside city of Limassol, Cyprus, there is no shortage of spectacular roads to enjoy and vistas to appreciate when parked up. So to make the dream a reality the original importer of the bike, Petros Louca of Underground Custom Cycles was tracked down to carry out the build. With the Mustang as his muse he emerged from his workshop with the perfect CX500 cafe racer, a Cypriot chariot to carve up the coastline. 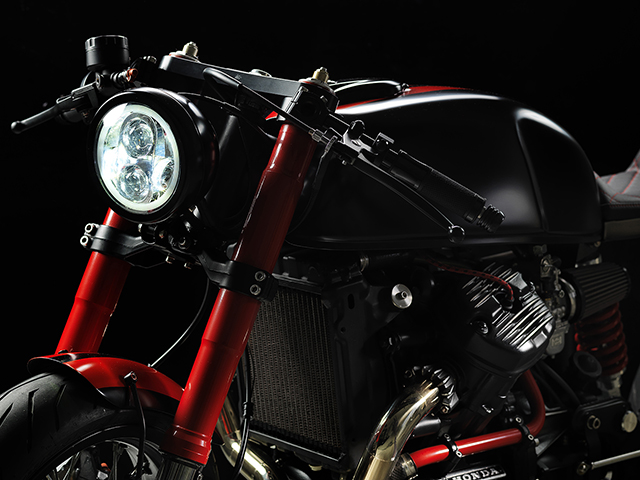 With limited diversity across the automobile sector on the island, Petros first imported the 1978 model Honda in 2013 with the intention of turning it into a custom. After a year he sold it off and used the money to fund the tools and equipment he needed to set up his workshop. After changing hands a few times the CX500 found its way into the collection of the current owner who came to Petros with a desire to have a custom bike to match his Mustang. 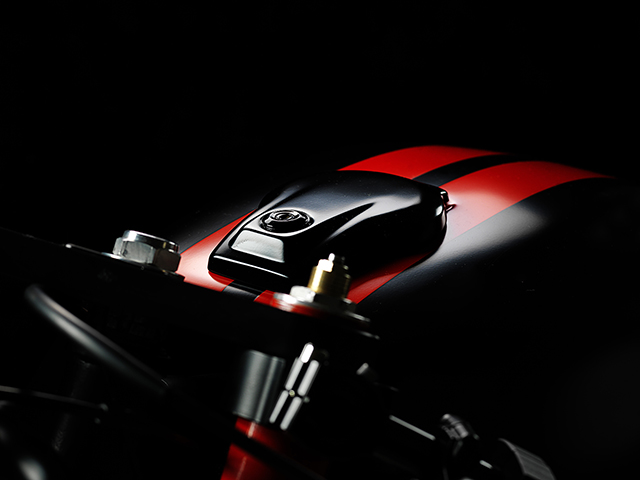 While the bike had previously been modified, it was nothing like the beast that sits before you; but all that was stripped down to start afresh. With a bare chassis to work with Petros fired up the grinder and cut off the ungainly CX500 subframe. Next on the list was to fabricate a new item to go in its place, with plenty of bracing around the centre post to allow the new piece to float over the back wheel. New brackets were welded in to support a conversion to a single shock and the swingarm was notched for extra clearance and given more structural support. 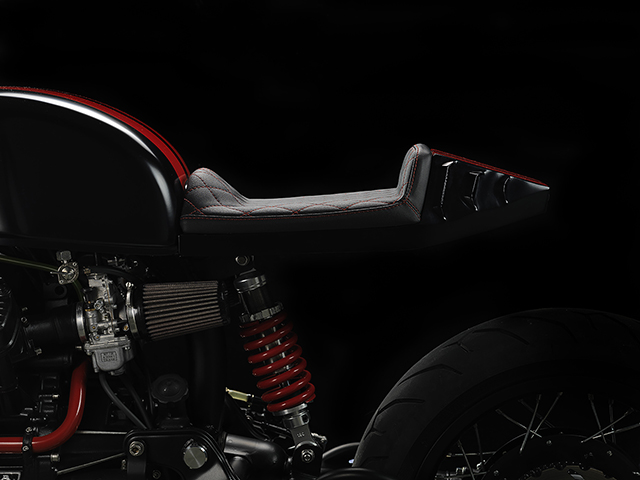 With the last of the unrequired factory brackets and everything ground smooth, old and new were merged together once more. To ensure an excellent finish the frame, new subframe and swingarm were all sandblasted before being powder coated in a flat black finish. To piece things back together Petros ordered a single shock for the rear end from Hagon in the UK. While the front end is taken from a 2004 Yamaha R1, with a Cognito Moto top yoke making the conversion possible. 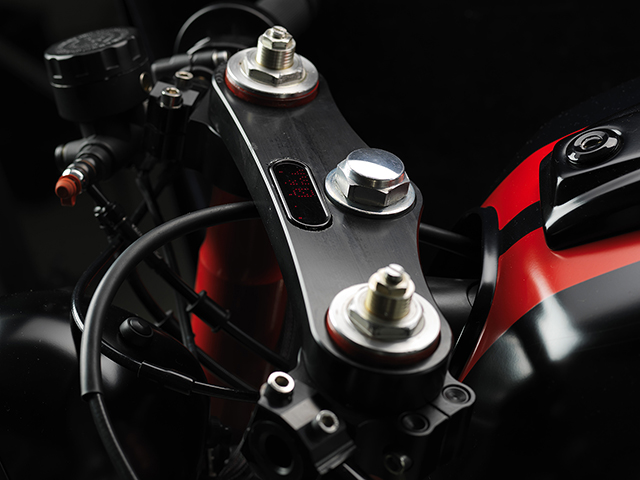 The four-piston calipers have been rebuilt and retained while the big discs are now wave style rotors, a huge upgrade over factory. At the rear, the braking is just as spectacular, a custom bracket used to mount the Yamaha caliper and a small wave disc. While a set of new rearsets and linkages assist in helping the Brembo master cylinder to work perfectly. The final party piece to get the bike rolling is the conversion to spoked wheels using a CRK flange kit, EXCEL aluminium rims, and the stock hubs. 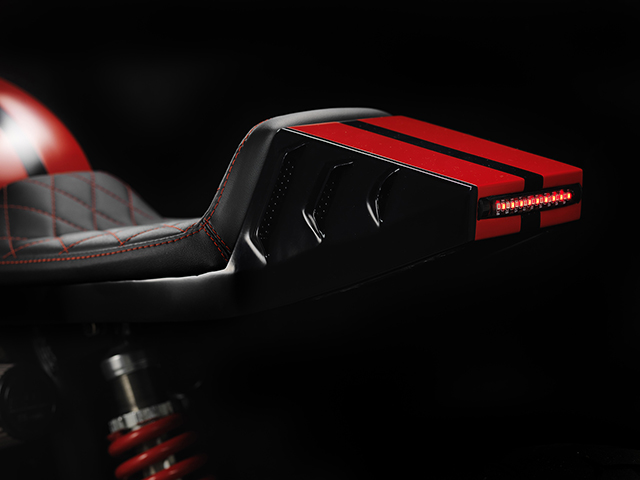 With the new USD forks in place Petros new the clip-ons would foul the factory tank, so with new mounts its been shifted back 5cm and mounted 3cm higher for a more aggressive look. “The seat took us 3 months to finish as it was the hardest part of the build, because we decided to put similar air vents like the Mustang,” Petros explains. But the effort was worth it and topped with the brilliantly stitched leather it adds to the muscle car feel. The red and black paint scheme is matched perfectly to the ‘Stang and even extends to the forks, shock and parts of the v-twin engine. 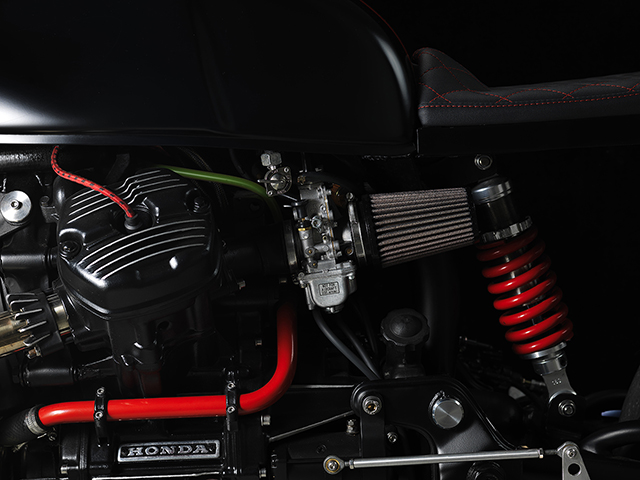 Which is just as impressive as the rest of the build, having been stripped down and sandblasted before being painted black and the fins filed for a contrast effect. A full rebuild ensures there will be plenty of years of trouble-free motoring and it’s all pieced back together with new stainless bolts. The stock CV carbs have been ditched in favour of the popular upgrade to Mikuni TM34 flat slides. While the exhaust adds extra grunt and a ripping roar with a hand made stainless system finishing out in twin slash-cut EvoGP mufflers. To get everything fired into life and maintain a clean look the entire wiring harness has been rebuilt with a Motogadget m-unit at its core. LED lighting extends from the front round headlight to the integrated tail light, flush-mounted in the new bodywork. While instrumentation is kept to a minimum with a Motogadget mini sitting in the top triple tree that was machined on arrival in Cyprus. 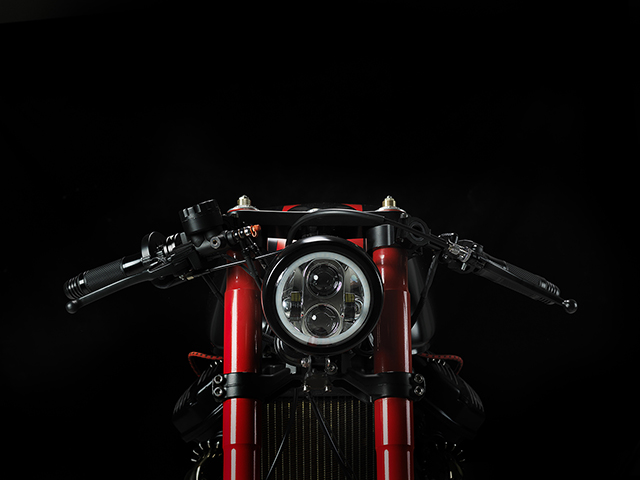 To literally wrap things up the new rolling stock has been treated to Pirelli Diablo Rosso II rubber, a chunky 160 section in the rear, that Petros reports dramatically improves handling. And with the finished cafe racer emerging from Underground Custom Cycles the only decision the owner is left to make is Mustang or killer custom motorcycle… an easy choice to make. 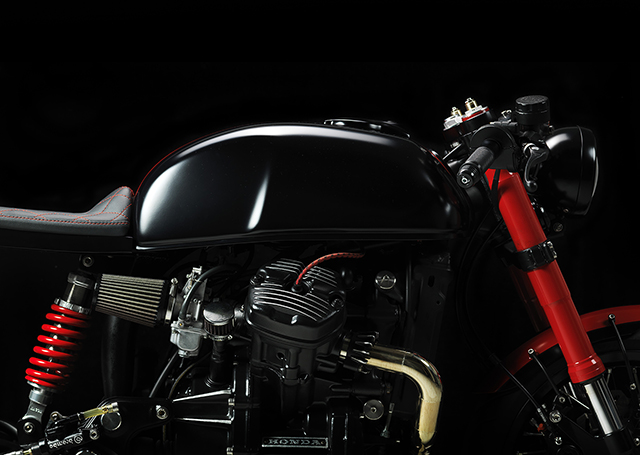 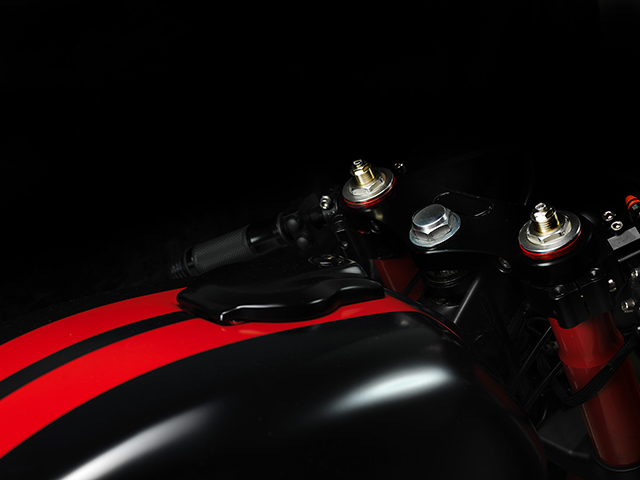 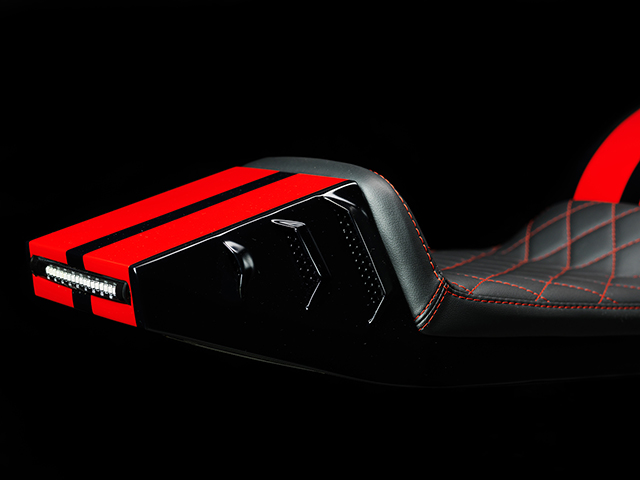 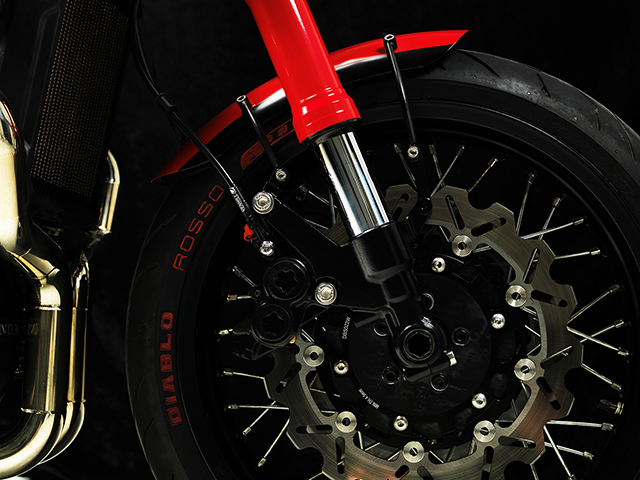 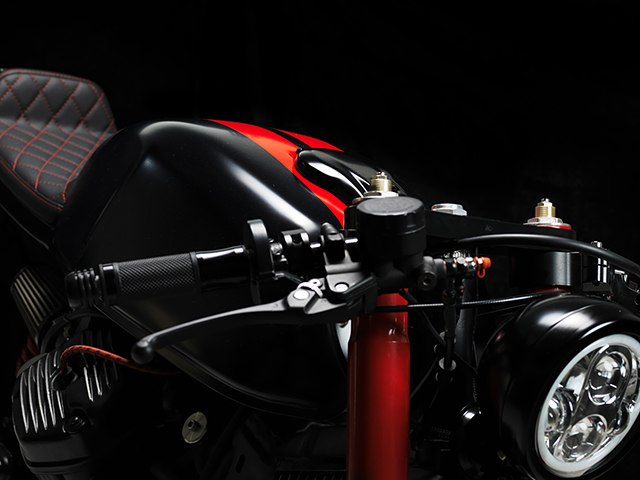 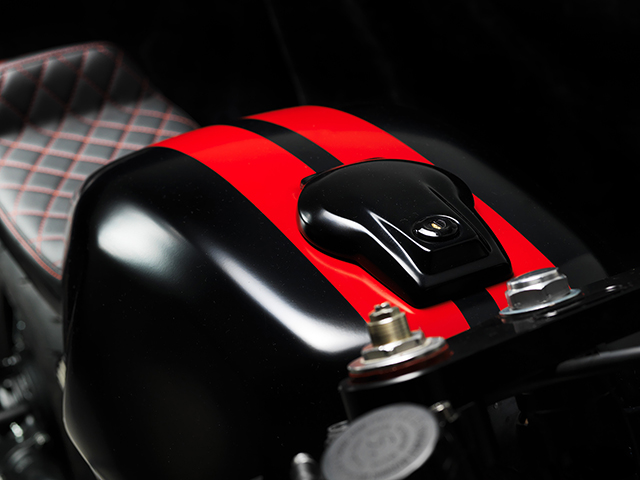 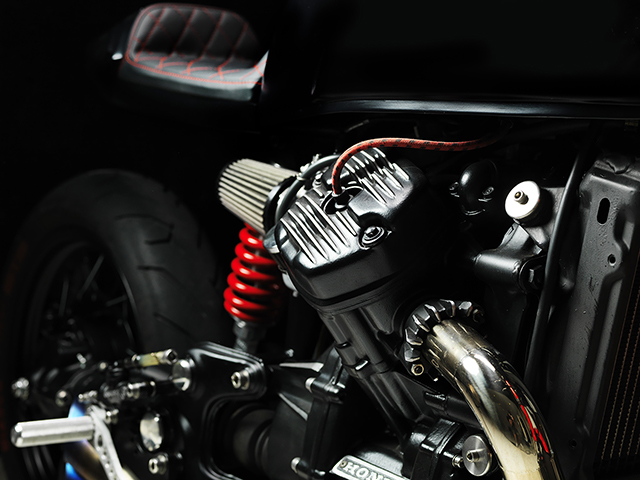 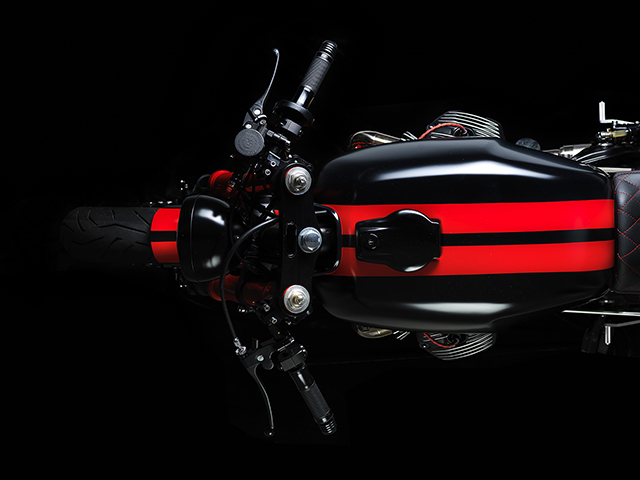 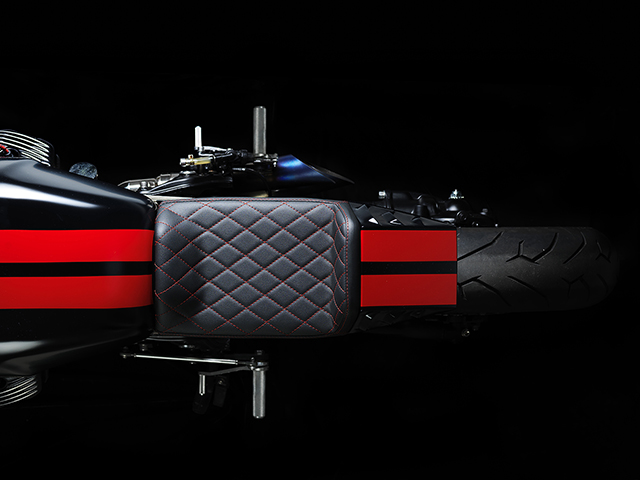 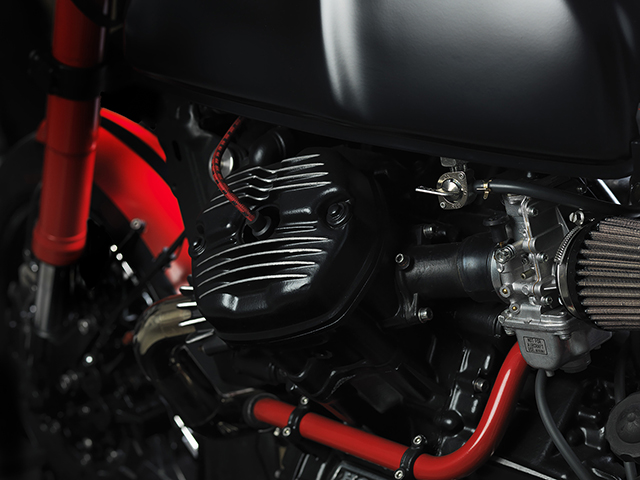 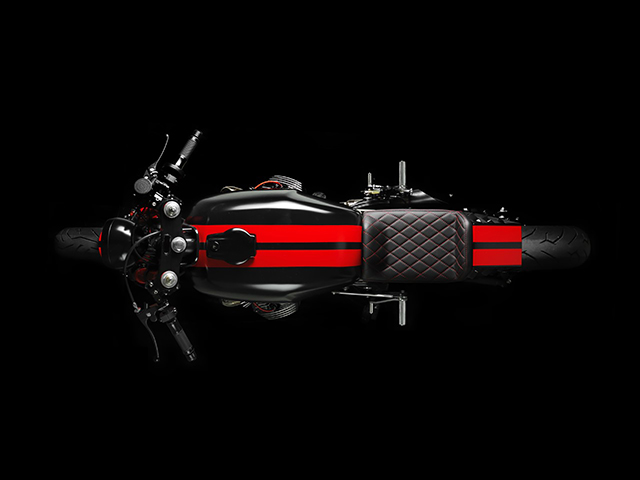